With technology and media companies snatching up nearby office space as fast as it can be built, LPC West and Clarion Partners are planning another Culver City development.

The L.A. Business Journal reports that the companies hope to break ground as early as next year on a new project at 3817-3855 Watseka Avenue, replacing a surface parking lot and two small office buildings.  The proposed project would consist of a four-story edifice featuring 150,000 square feet of offices above a three-level, 546-car subterranean parking garage. 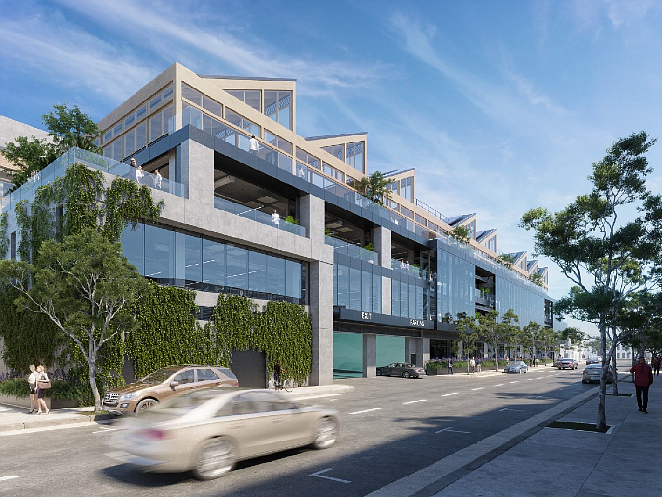 Gensler is designing the proposed glass-clad building, which is depicted in a rendering with a roofline of sawtooth windows and multiple balconies and amenity decks for tenants.  Plans call for high ceilings and mass timber elements, reports the Business Journal.

Completion is expected in 2024, at which time the developers hope to lease the property to a single tenant.

News of the Watseka Avenue development came on the heels of Apple's announcement that it plans to build a 550,000-square-foot office campus across the street from Culver City Station.  The tech giant already leases a 128,000-square-foot building developed by LPC West and Clarion on Washington Boulevard.

Other large blocks of space now in development near Downtown Culver City include Brick and Machine, a 60,000-square-foot development from DLJ Real Estate Capital Partners, and Hackman Capital Group's $620-million Culver Studios expansion, the bulk of which has been preleased by Amazon.

LPC West - a subsidiary of Dallas-based Lincoln Property Company - is also wrapping up construction at The Entrada, a 280,000-square-foot office building near Playa Vista, and is planning a 329,000-square-foot complex in Culver City-adjacent Baldwin Hills.