In 2017, the Los Angeles County Board of Supervisors moved to seize control of a property at the busy intersection of Vermont and Manchester Avenue, citing a lack of progress towards the redevelopment of a site that had been vacant since the 1992 uprising. Nearly five years later, the cornerstone of the mixed-use project slated to activate the long-empty lot has broken ground.

A ceremony held last month marked the start of construction for Evermont, a two-building affordable housing complex from San Francisco-based developer BRIDGE Housing Corporation. The first, called "The Family Building," will include 118 one-, two-, and three-bedroom apartments reserved for households earning between 30 and 80 percent of the Los Angeles area median income.  The second, named "The Senior Project," will feature 62 one-bedroom dwellings set aside for older adults earning up to 30 percent of the area median income.

TCA Architects is designing the project, which calls for buildings standing six stories in height, as well as a new plaza flanked by ground-floor retail space and a supermarket will also include a public The broader project also includes a new public boarding school, SEED LA, which is being built separately from the apartments. 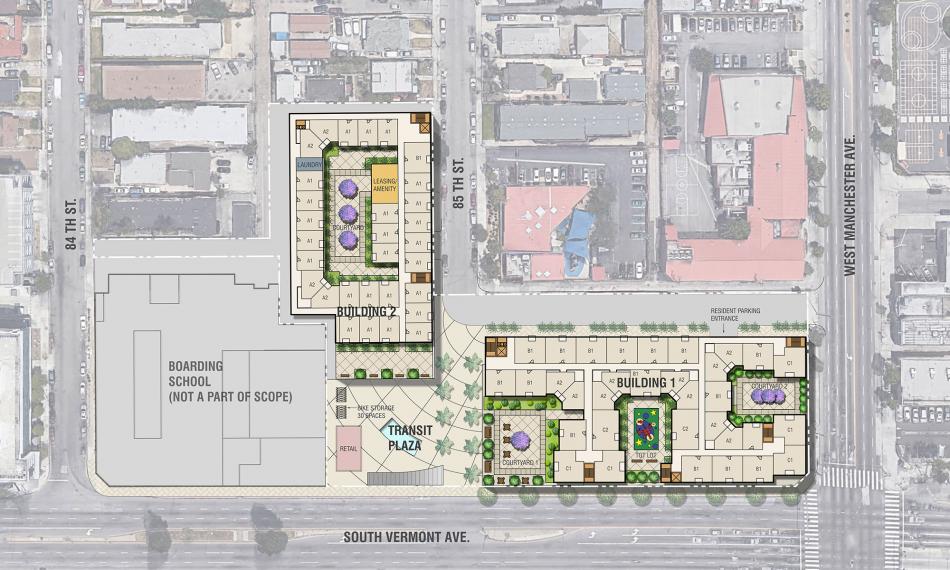 Construction of the Evermont is expected within two years, reports ABC 7.

BRIDGE Housing's other ongoing projects include new affordable developments in Long Beach, Koreatown, and Pasadena, as well as the revamp of the Jordan Downs complex in Watts.