A presentation to the Pasadena Design Commission offers a look at new renderings of a proposed multifamily residential complex which would rise from the current site of Throop Lumber just north of the I-210 Freeway.

The proposed project, which would rise from an amorphous two-acre property located at 444 N. Fair Oaks Avenue and 425 N. Raymond Avenue, calls for the construction of up to 206 apartments above a fully subterranean parking garage with space for 255 vehicles.

Summerhill Apartments Communities, the developer behind 444 Fair Oaks, is planning a mix of one-, two-, and three-bedroom dwellings. While the bulk of the housing would be located in new construction along the western half of the site, plans also call for seven courtyard apartments in restored building on Raymond Avenue to the east.  Of the total units, 11 percent would be set aside for rent by very low-income households, while an additional 5 percent would be priced as workforce housing.

KTGY is designing 444 Fair Oaks, which would include multiple structures ranging between two and five stories in height. The project, which was first presented to city officials in 2019, is described as a "contemporary interpretation of the Main Street Commercial Style," with finishes including siding and stucco. A series of courtyards and arcades would break up the large project site and allow pedestrian movement across the property. 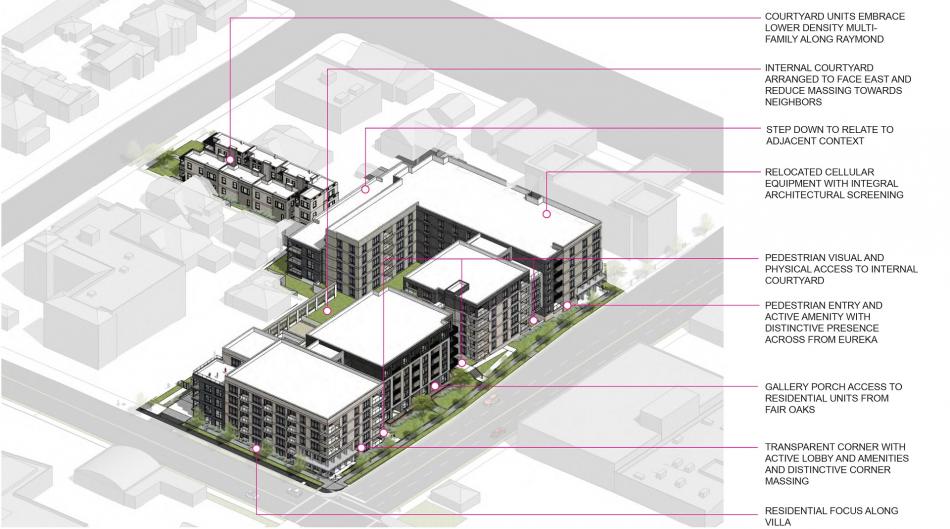 Summerhill, a subsidiary of Marcus & Millichap Company, previously developed the Theo apartments on the opposite side of the 210 Freeway in Pasadena's Playhouse District. The developer had also targeted a nearby 99 Cent Store for redevelopment with housing, before withdrawing its project from consideration in May 2021.