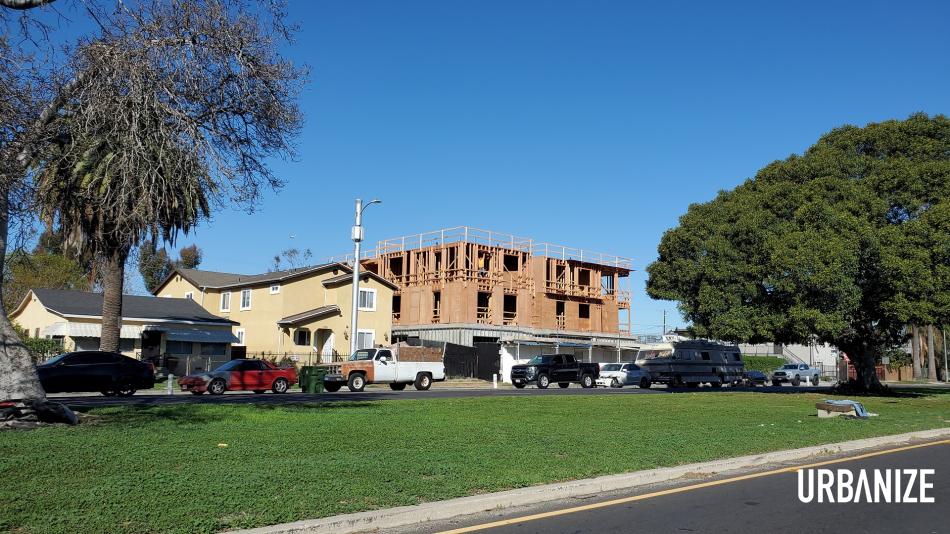 Construction of the Asante apartmentsUrbanize LA

The Asante Apartments, located 11001 S. Broadway, will consist of a five-story building featuring 55 studio- and one-bedroom apartments, as well as a two-bedroom manager's unit  A seven-car parking lot is planned at the rear of the property, which sits at Broadway's intersection with 110th Street.

The apartments are to be restricted to households earning no more than 50 percent of the Los Angeles area median income.

A rendering of the project, which is designed by AC Martin, depicts the Asante as a contemporary podium-type building clad in stucco. Per a staff report issued by the Housing and Community Investment Department, plans call for open space amenities including an elevated terrace, a community room, and a computer room.

The per-unit cost of the Asante development was estimated last year at approximately $498,470 per unit - or roughly $27.4 million in total.

The project is one of at least a half-dozen affordable and supportive housing developments in Los Angeles County from San Diego-based Affirmed Housing, following projects in Westlake, East Hollywood, Westmont, and Sawtelle.  The company already has one apartment building under construction in Broadway-Manchester - the 56-unit Dahlia development at 120th and Main Streets.