A 1960s office building in Beverly Grove that received a 1990s makeover from Morphosis is poised for another revamp, according to an application recently filed with the Los Angeles Department of City Planning.

South Park Group, which owns the six-story, 36,816-square-foot building at 8201 Beverly Boulevard, is seeking approvals from the Planning Department to convert an existing mechanical penthouse into leasable office space.  The proposed project, which also calls for transforming a portion of unused rooftop as a tenant amenity deck, would add approximately 1,500 square feet of space to the building, increasing its total rentable area to more than 38,000 square feet.

Morphosis, which led the building's early 1991 transformation, is once again serving as the architect for the rooftop addition.

"We took inspiration from the structure, responding to the existing steel frame as a datum, ultimately witnessed through the translucent glass skin of the west elevation," reads a design narrative of the firm's prior work on the building, formerly known as the Salick Healthcare Administrative Headquarters.  "At the same time, a series of design manipulations, both subtractive and additive, distort the façade, unsettling the anonymity of the extant building and responding to the accretional pattern of urban growth. A triangular volume projects outward from the building’s surface, expressing an ordering geometry that is carried up through the building, culminating in a cantilevered plane that rises out over the roof at the northeast corner. This cantilevered wall interrupts the surface membrane of juxtaposed glass and granite, enhancing the irregularity of the new building’s exterior." 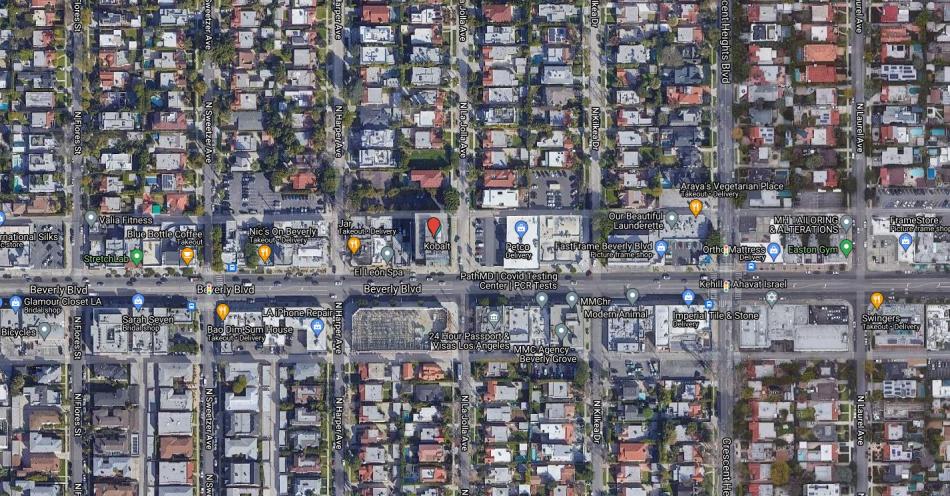 Findings included with the project's entitlement application state that high-end, mid-sized office buildings are in short supply in Los Angeles, and describes 8201 Beverly as a "one-of-a-kind exception" in the Beverly Grove neighborhood.  The building, which has windows on all four sides, stands heads and shoulders above all of its immediate neighborhoods - something that is only possible due to the era of its construction.

Completed in 1964, 8201 Beverly predates the passing of Proposition U in 1986 - a voter initiative that curtailed the development potential for commercially zoned properties across Los Angeles.  As a result, the existing 72'foot-tall building is an existing non-conforming structure that exceeds the property's 45foot height limit.  To facilitate the conversion of the mechanical penthouse as office space, South Park Group will need to secure a zone variance to allow for a maximum height of nearly 89 feet.

"This increase is a mere code-driven technicality as there will be no physical changes to the height of the building visually," states the findings.  Rooftop mechanical structures are not considered to be part of building height under zoning rules, whereas habitable space counts against height limits.

According to the findings, South Park Group has already met with representatives of the Mid-City West Community Council, who have signaled their support for the project.

South Park Group, which is based out of Beverly Grove, is also developing a handful of apartment buildings on La Cienega and Beverly Boulevards.