A prolific Los Angeles-based real estate development firm with a penchant for modular construction has designs on another project in Downtown.

Bolour Associates, a Beverly Hills-based firm which finances and develops projects, announced last week that it had provided a $11.5-million loan for the acquisition of an industrial site at the southeast corner of 12th and Olive streets in the South Park neighborhood. Existing improvements - including brick warehouses dating to the early 20th century and surface parking - are slated to be razed to make way for a new multifamily residential complex. 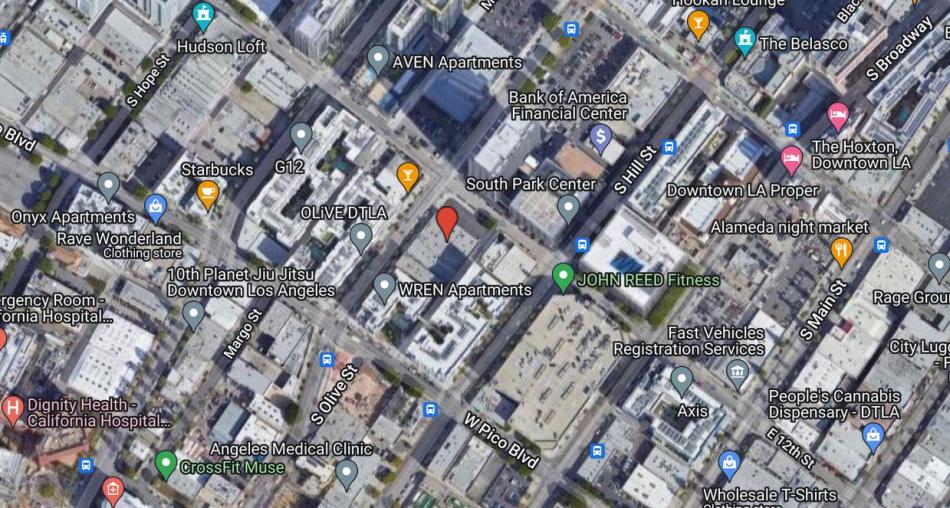 "Bolour continues to actively lend on land and development opportunities across Southern California, including this loan supporting the acquisition of a vacant industrial building and 30,476-square-foot land site in the heart of Downtown Los Angeles," said Bolour's chief executive officer Mark Bolour in a statement. "This parcel will soon be entitled and transformed into a 16-story, 356-unit modular multifamily development offering much-needed, highly amenitized apartment inventory in L.A.’s urban center.”

A title search for the property lists the buyer as an entity affiliated with Relevant Group, which paid $16.5 million for the site. The Hollywood-based developer is already planning two modular high-rise apartment buildings nearby at 845 S. Olive Street and 252 S. Spring Street which would create a combined total of nearly 700 apartments. The company's other projects include a proposed revamp of the Morrison Hotel on Pico Boulevard.

The 12th and Olive Site is hemmed in by the Aven apartment tower and the Wren development, both built by Mack Real Estate Group. That firm also owns several other parking lots in the surrounding vicinity, which slated for redevelopment with apartment and hotel towers.