Six months after spending more than $90 million to purchase a self-storage facility next to La Cienega/Jefferson Station, Australian real estate and construction firm Lendlease has revealed plans to redevelop the site with multifamily housing and office space.

Slated for a 3.5-acre site at 3401 S. La Cienega Boulevard, the project would replace a series of storage sheds with a 12-story, 260-unit residential tower and a six-story, 250,000-square-foot office building.  The two structures would share a subterranean parking garage and a street-level plaza, which would be activated with community-serving retail space. 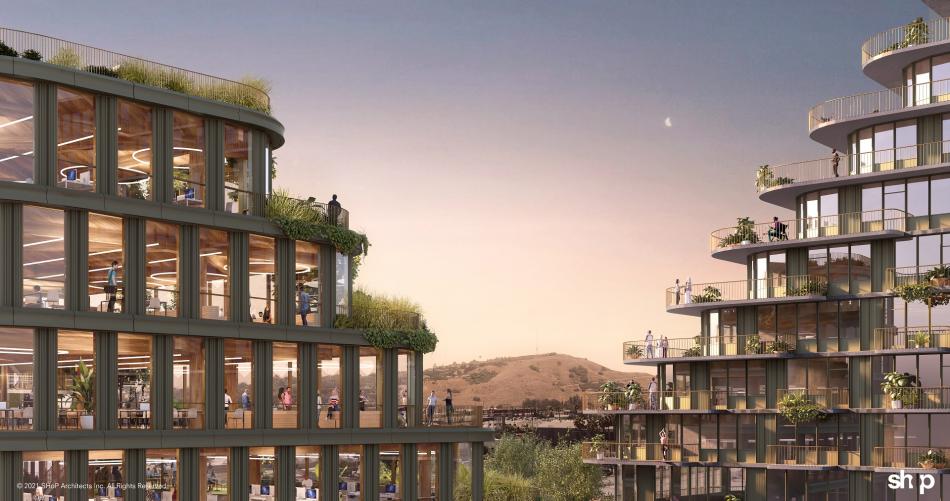 Lendlease will seek entitlements using the California statewide density bonus program, which will require that a minimum of 11 percent of the new apartments are set aside at rents considered affordable at the very low-income level.  Additionally, the project will include an additional seven apartments voluntarily reserved as "workforce" housing, says Lendlease America’s executive general manager Arden Hearing, who cited feedback during early community outreach as the motivation behind the decision.

Although an exact mix of units has not been set at this point in the entitlement process, Hearing says that the project will include floor plans ranging between studio and three-bedroom dwellings, with an average size of approximately 800 square feet.

SHoP Architects is designing 3401 La Cienega, which is the prolific New York-based firm's second announced project in the Los Angeles region.  Renderings depict the two buildings as contemporary mid-rise structures with cascading terrace decks on upper floors.  The office building will notably include cross-laminated timber in its construction, giving its interior a unique aesthetic, according to Hearing.

At street-level, Hearing says that the project will do away with the barbed wire fence facing the adjoining rail station and bike path, creating a perimeter that is visually porous with multiple entry points.  Altogether, plans call for roughly 30,000 square feet of open space at 3401 La Cienega, designed by landscape architecture firm RELM.

The project is being developed as a joint venture between Lendlease and Aware Super, an Australian investment firm.  Pending the approval of entitlements, the joint venture expects to break ground on the project in 2023 and complete work by 2025.

The project site, sandwiched between West Adams and Culver City, is the latest in a series of large mixed-use and commercial developments planned for the neighborhood.

On the opposite side of La Cienega/Jefferson Station, San Francisco-based Carmel Partners is in the midst of construction on the second phase of the  Cumulus District, a 12-acre complex consisting of more than 1,200 apartments and a Whole Foods Market.  Next door at National and Jefferson Boulevards, the 17-story Wrapper office tower is nearing its vertical apex, which developer Samitaur Constructs and architect Eric Owen Moss hope to follow with a second high-rise on a neighboring parking lot.

Another property developer recently submitted an application to the Planning Department to build a 254-unit apartment complex on the opposite side of La Cienega Boulevard, while Kilroy Realty Corp. and Lincoln Property Company are both planning large office buildings nearby.

While 3401 La Cienega is Lendlease's first development project in Los Angeles - though the company has a long track record as a general contractor - it may not be its last.  According to Hearing, Lendlease is pursuing more than $15 billion in new projects across California, and is exploring new sites in commercial hubs like Culver City, Hollywood, and Downtown.