An empty office building in Beverly Grove is poised to make way for a multifamily residential development from Black Equities. 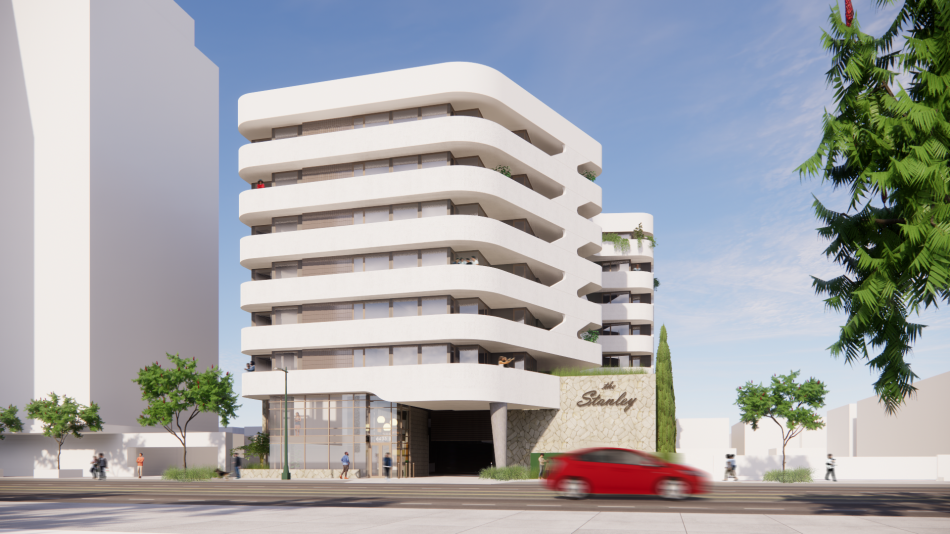 The property, located at 6435 Wilshire Boulevard, sits one block east of the Los Angeles-Beverly Hills border on San Vicente Boulevard.  Plans call for razing the existing five-story structure, which was completed in the early 1950s, making way for a new seven-story building featuring 68 studio, one-, two-, and three-bedroom apartments above a two-level, 87-car subterranean parking garage.

Black Equities will seek entitlements for the project using Transit Oriented Communities incentives, owing to the property's location midway between two future stops on Metro's Purple Line extension and several bus lines traveling Wilshire Boulevard.  In exchange for the bonus floor area, seven of the new apartments will be set aside as affordable housing at the extremely low-income level.

Studio One Eleven is designing the project, named "The Stanley" after Black Equities founder Stanley Black, which would incorporate Art Deco elements common to the Wilshire corridor.  Plans call for a curving white exterior with stone accents.  Proposed on-site amenities include a podium-level swimming pool and fitness center, as well as a rooftop deck and resident lounge.

While the proposed project may be taller than the office building it replaces, it does not match the scale of two of its new neighbors.  Just east at the intersection of Wilshire and La Jolla Avenue, developer WS Communities is now building a 16-story, 112-unit apartment tower at the former site of a parking lot.  To the west at Wilshire and San Vicente, a 12-story medical office building is poised to replace a Big 5 store.

Black Equities, which is headquartered in nearby Beverly Hills, is also planning a senior housing development on Beverly Boulevard.