Eight years after acquiring much of the Downtown Los Angeles skyline through its purchase of MPG Office Trust, Brookfield is capitalizing on some of the unused development rights of a landmark property on Bunker Hill. 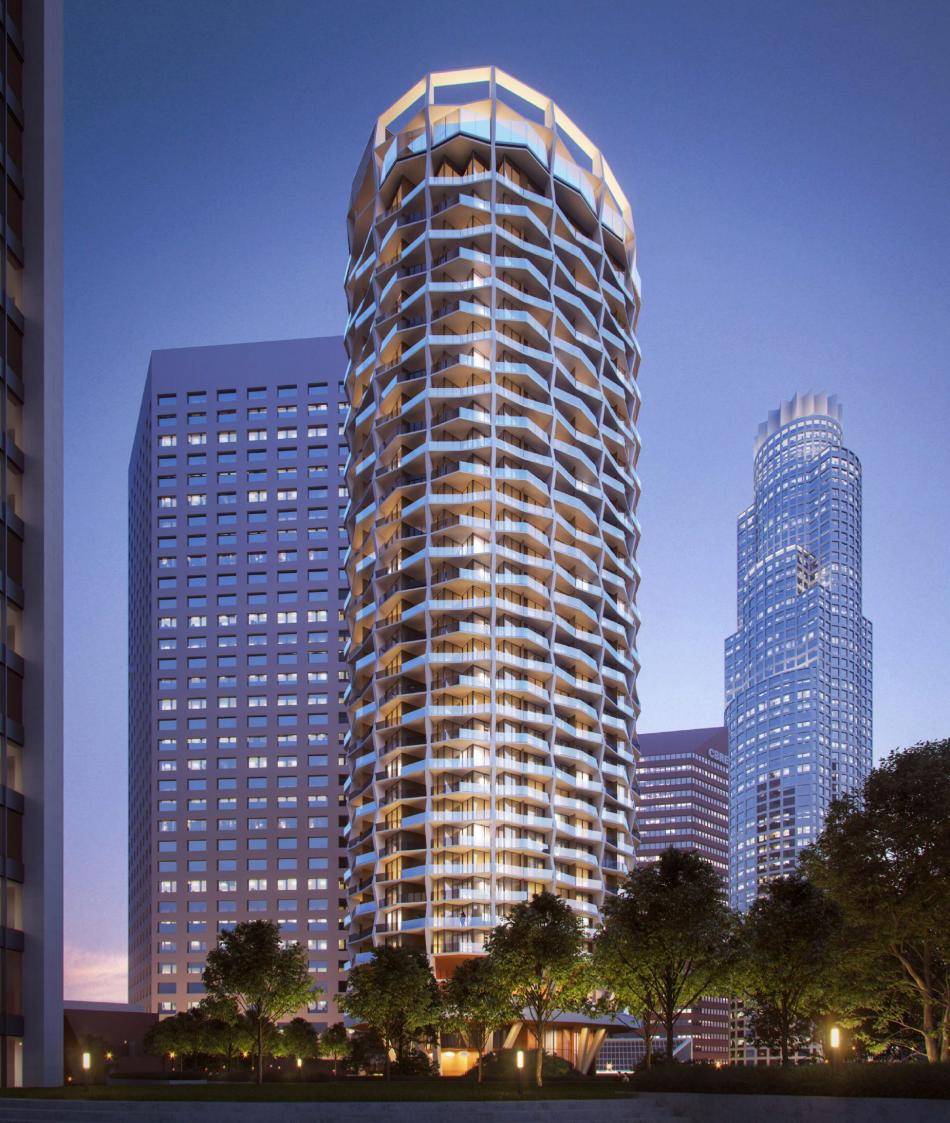 Earlier this month, the New York-based real estate investment firm filed an application with the Department of City Planning to add a residential high-rise to Bank of America Plaza, a 55-story office tower located at 333 S. Hope Street. The project, named the Residences at 333 South Hope Street, would replace a portion of the building's plaza and parking structure with a new 34-story edifice featuring 366 studio, one-, and two-bedroom dwellings with a 425-square-foot cafe located at street level.

LARGE Architecture is designing the proposed high-rise, which would have a cylindrical footprint confined to the southeast corner of the site, adjacent to both 4th and Hope Streets. The tower, rising to a maximum height of 420 feet above street level, would have a textured facade of glass, concrete, and metal. At street level, the tower features setbacks to minimize impacts to the existing landscaping of Bank of America Plaza, with a series of V-shaped beams used to support the floors above. Outdoor seating and landscaping (designed by RELM) would surround the building, with private open spaces proposed at the third floor (including a fitness room, pool, and spa overlooking the plaza) and the roof level.

Parking for 187 vehicles would be provided within the existing Bank of America Plaza garage, which includes 2,185 vehicle stalls. As only 1,331 spaces are required by zoning rules, 854 stalls are considered surplus spaces. 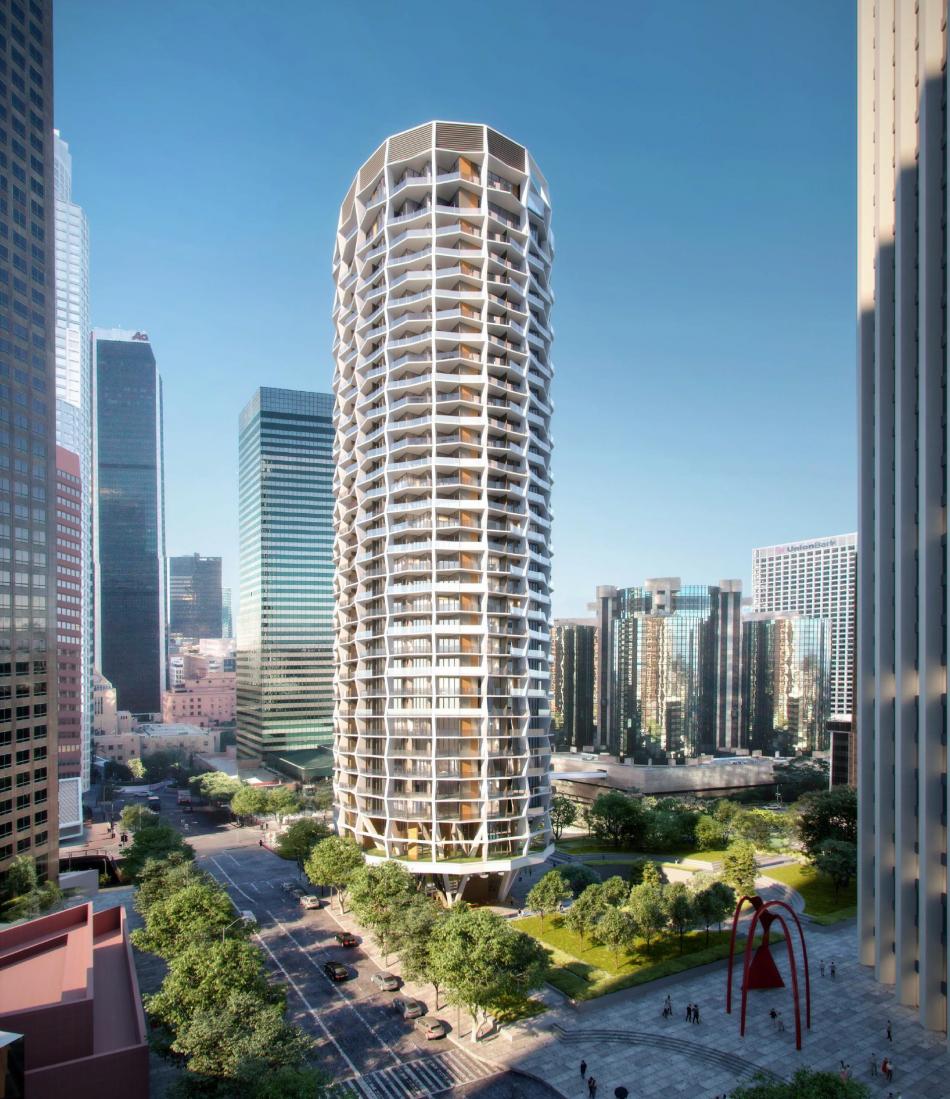 Pending approvals by the City of Los Angeles, including a conditional use permit for alcohol sales and permission to deviate from certain design standards in the Bunker Hill specific plan, Brookfield expects to build the Residences over a 32-month period concluding in 2026.

Brookfield, which is the largest owner of office space in Downtown Los Angeles, has gradually invested in renovations to its properties over the past eight years, including revamps of the California Market Center office complex, the Figat7th mall, and the Wells Fargo Center atrium. The company is also in the midst of construction on a large residential tower near the intersection of 7th and Figueroa Streets.

While Downtown's recent growth has been concentrated in ground-up projects in neighborhoods such as South Park and the Arts District, there are also signs of change on Bunker Hill, a former residential neighborhood that has long been dominated by office towers. Construction is in the final phases for The Grand, a Frank Gehry-designed hotel and residential complex near the Walt Disney Concert Hall, while the former site of the temporary Angels Knoll Park is slated for a skyline-altering development named Angels Landing. Metro is also scheduled to expand rail service to the neighborhood in 2022, when a new station for the A and E Lines is expected to open at 2nd and Hope Streets. 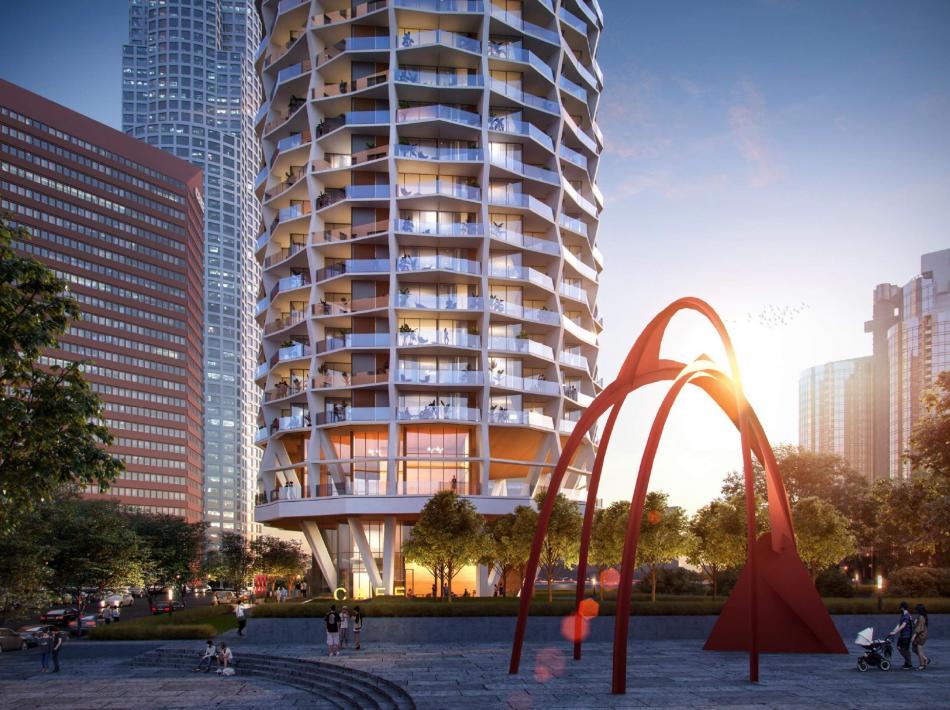