In an effort to meet its state-mandated housing goals, Burbank is launching a new specific plan which could bring thousands of residents and new commercial developments to its downtown core.

The Burbank Downtown Transit Oriented Development Specific Plan, which encompasses a nearly 1,000-acre area centered on the Burbank commuter rail station, recently began its environmental review period.  The project, described as a framework for new housing, development standards, and pedestrian improvements in Downtown Burbank, is expected to accommodate up to:

The proposed zoning is being developed in pursuit of a City Council goal of building 12,000 residential units citywide by 2035, as well as a requirement to zone for at least 8,772 residential units by 2028 under Burbank's regional housing needs allocation.  The draft plan identifies 14 potential groupings of sites for infill development, many of which are currently improved with small industrial buildings, big box stores, surface parking, or a combination of the three. 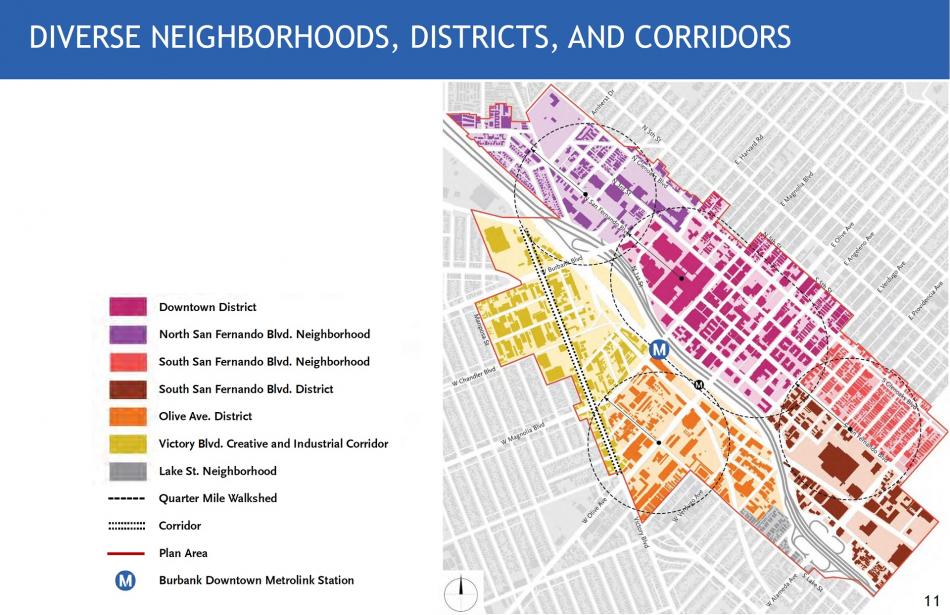 Proposed districts of the Burbank Downtown TOD PlanCity of Burbank

The specific plan, as detailed in a May 2021 presentation to the Burbank City Council, is divided into multiple different subareas, distinguished by the land use patterns and the expected intensity of development.

Located at the center of the specific plan area, the Downtown District intends to retain San Fernando Boulevard as the neighborhood's main commercial spine, while also encouraging the use of alleys and paseos for outdoor seating and pedestrian circulation.  More ambitiously, the plan proposes an extension of San Fernando through the site now occupied by the Burbank Town Center mall, which would allow the superblocks of the shopping center to be subdivided and redeveloped.

Similar building forms are imagined for the residential district to the south of Downtown, though the area lacks the large commercial sites which lend themselves to redevelopment.

Located to the west of Metrolink's Burbank Station, the Olive Avenue TOD District is proposed as a walkable neighborhood incorporating a mix of industrial, office, commercial, and hospitality uses.  Large blocks of more than four acres of size are proposed to be subdivided with new streets, while Victory Boulevard would be elevated as the neighborhood’s central commercial spine.

To the north of the Metrolink Station, the proposed Victory Boulevard Creative and Industrial Corridor would retain existing industrial land uses, while also providing the opportunity for some buildings to transition toward office space.  The area is already home to one of the largest proposed developments in the City of Burbank: the $375-million La Terra Select complex that would bring 573 apartments and a 300-room hotel to an empty lot at 777 N. Front Street. 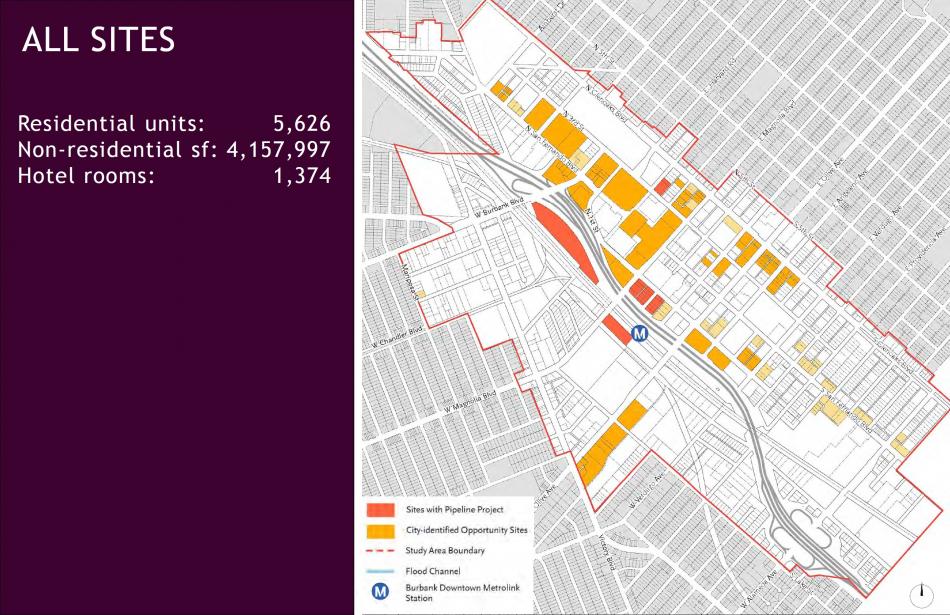 Outside of development standards and zoning rules, the specific plan would also lay out measures for improved pedestrian and bicycle infrastructure - particularly near the Metrolink Station - as well as new streetscape elements.

The comment period in advance of the project's environmental impact report will run through June 18 at 5:00 pm.  More information is available at the TOD plan's website.

Concurrent with the Downtown plan, Burbank is also considering updated zoning which could facilitate the construction of as many as 5,000 homes in the neighborhoods located east of Hollywood Burbank Airport.