In the coming months, Downtown Los Angeles is expected to add to its small, but growing collection of bus priority lanes.

According to a presentation distributed by the South Park Business Improvement District, Metro and the City of Los Angeles expect to break ground in Fall 2021 on new peak-hour bus lanes along Grand Avenue and Olive Streets.  The lanes will function as a couplet, running one mile southbound on Grand Avenue from 5th Street to Pico Boulevard and 1.4 miles northbound on Olive from between Pico and Hill Street.

The lanes, scheduled to operate between 7:00 am and 7:00 pm on weekdays, would permit buses to run every minute along both corridors.  Plans call for converting the rightmost traffic lane on each street, preserving existing protected bike lanes on the left side of both Grand Avenue and Olive Street.  As both streets feature little curbside parking, only four stalls would be removed to implement the bus lanes. 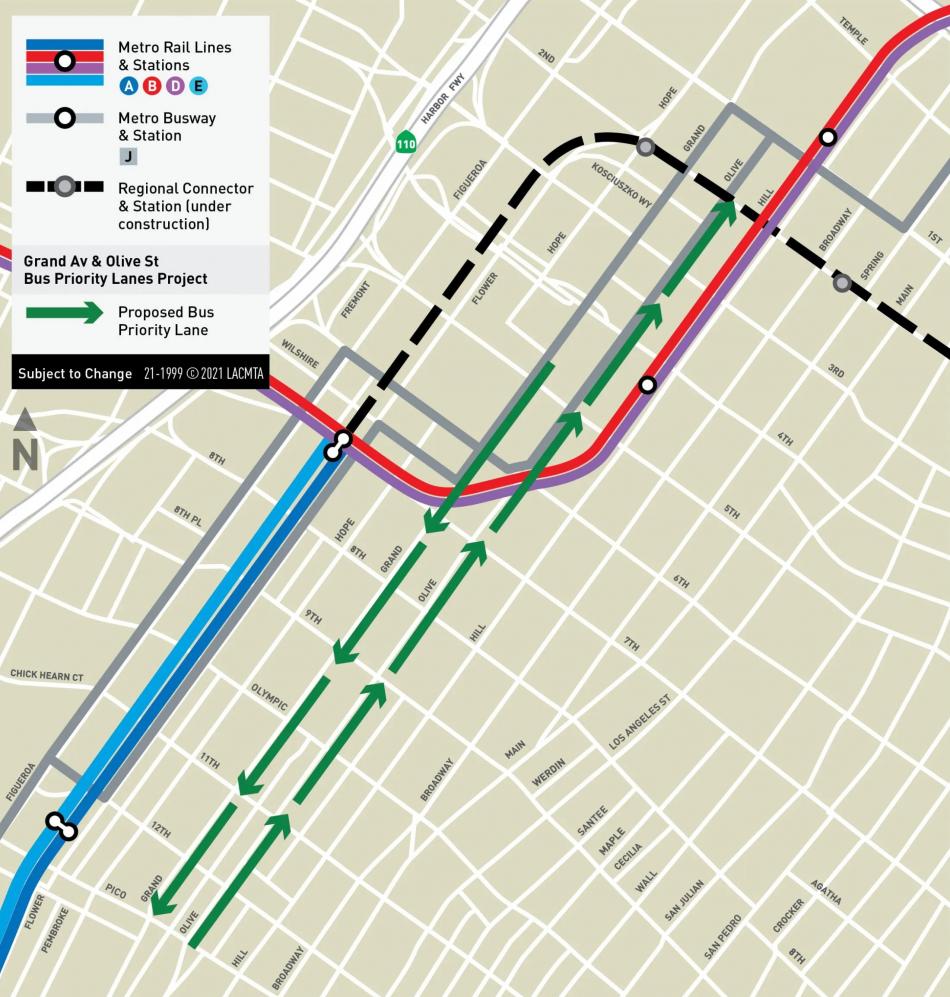 Metro, which has scheduled a public forum on the bus lanes for August 31 at 6:00 pm, intends to continue outreach for the project through the summer.  Here's how to participate in the virtual meeting:

According to The Source, the Grand Avenue and Olive Street bus lanes could improve transit travel times along both corridors by 15 percent.  Approximately 120,000 passengers ride the buses which use the two streets.

The new bus infrastructure would intersect with existing bus priority lanes on 5th and 6th Street, while also running parallel to bus lanes on Figueroa and Flower Streets.

Downtown’s expanded bus infrastructure has come about as a result of  Metro's NextGen Bus Plan, which reoriented service patterns across Los Angeles County and included allowances for new projects intended to speed travel times for transit vehicles.  The plan recently added bus-only lanes to Alvarado Street between Westlake and Echo Park- the first corridor outside of Downtown to see the addition of priority lanes.