At the intersection of Pico Boulevard and Stearns Drive, the site of a 1950s Orange Julius stand turned burger joint will soon be reborn as a Googie-inspired apartment building. 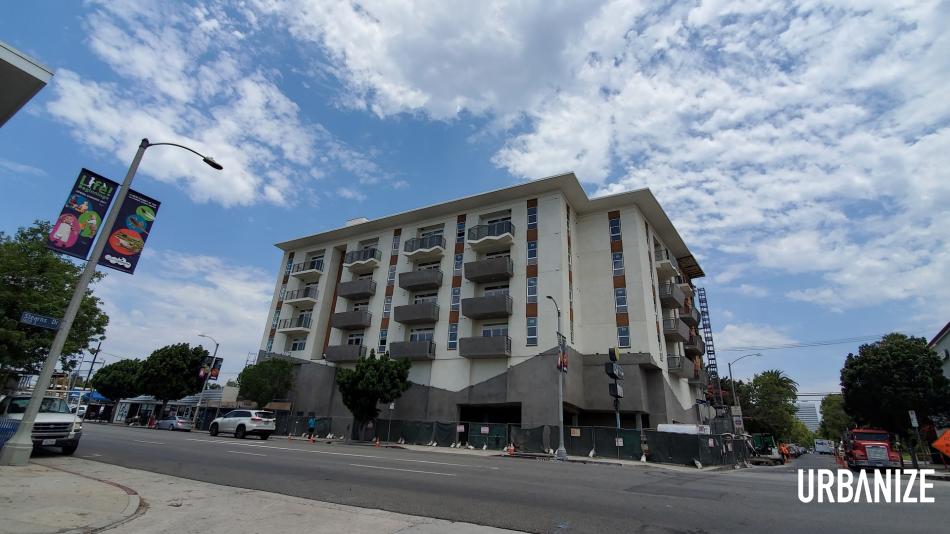 Local developer Ikon Ltd. is nearing completion of its latest project at 6001 W. Pico Boulevard - a six-story building featuring 48 residential units above 1,000 square feet of ground-floor retail and parking for 70 cars.  Five of the apartments will be set aside for low-income household in exchange for density bonus incentives permitting a larger development than allowed under base zoning.

PK Architecture is designing the apartment complex, which uses the undulating roofline of the former Orange Julius stand as an architectural motif seen in the eave lines of the new building.  The stand's neon sign, which displays the name of the property's most recent tenant - L.A. Burger - has also been retained and incorporated into the project.

The Googie design of 6001 Pico is the result of a compromise between the developer and 5th District Councilmember Paul Koretz, who had sought to landmark the Orange Julius stand in 2017 to prevent its demolition.  The original plan, a more contemporary design, was dropped in favor of a revised project that would save the single-story building's signature architectural features.

The Ikon project joints a handful of similar mixed-use and multifamily residential buildings that are now taking shape on the stretch of Pico Boulevard which passes through the Mid-Wilshire, Carthay, and Mid-City communities.

Ikon, the developer of 6001 Pico, is also behind plans for a 42-unit apartment building in the Sawtelle neighborhood.