The project, which would rise from a roughly 30,000-square-foot site at the northwest corner of Lankershim Boulevard and Hesby Street, calls for the construction of a seven-story building featuring 125 hotel rooms above 9,350 square feet of ground-floor retail and restaurant space and an 85-car garage.

AXIS/GFA is designing the building, which is depicted in renderings as a contemporary podium-type structure clad in a combination of metal, cement, and stucco. Plans call for a V-shaped footprint above street level, wrapping a rear-facing loading dock and parking area.  A conference facility, a fitness center, and a rooftop pool deck are also proposed.

An environmental study previously published by the City of Los Angeles indicates that construction of the hotel is expected to occur over a roughly two-year period starting as early as this year and concluding in 2024. 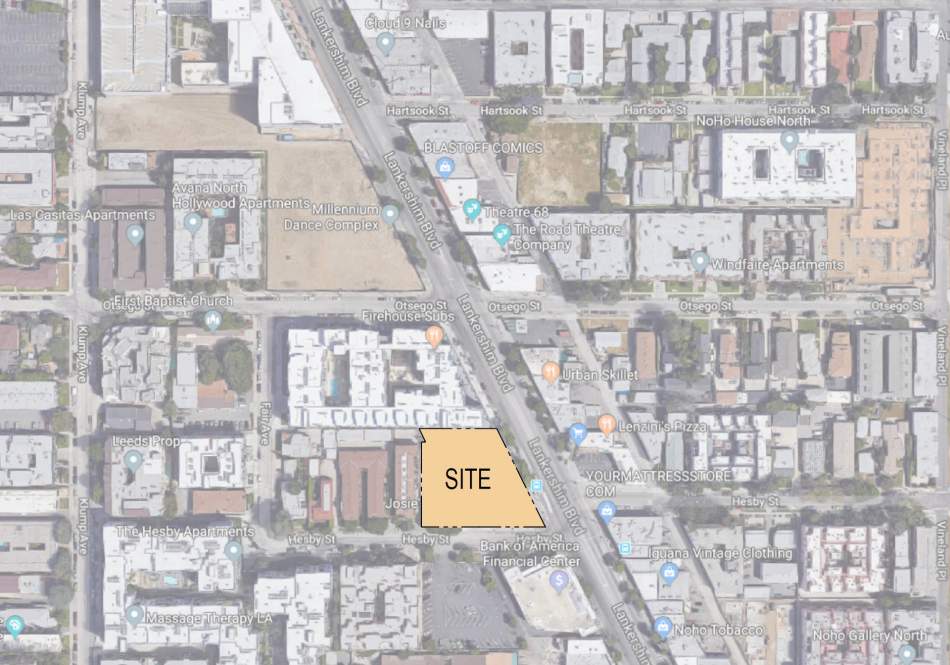 In addition to recommending the recommending the approval of a general plan amendment and a zone change for the project, the Commission also voted to turn down an appeal from hospitality labor union UNITE HERE Local 11, which sought to force changes to the project. Rejection of the appeal was ultimately a moot point, as Napa Industries signed an agreement to employ union labor at the hotel prior to the hearing, resolving the conflict.

While the Commission approved the bulk of Napa's requested entitlements, they opted against permitting the developer to build one hotel room per 158.3 square feet of floor area, rather than one room per 200 square feet allowed by zoning rules. As a result, the total size of the project has been slimmed down to 125 guest rooms from the 171 keys originally proposed.

The project sits roughly a half-mile south on Lankershim Boulevard from Metro's North Hollywood Station, where Trammell Crow Company is pursuing the  $1-billion District NoHo project, which would replace a park-and-ride lot with housing, offices, and retail space.