In an event held yesterday, The Colburn School unveiled new designs from architect Frank Gehry for a planned 100,000-square-foot expansion of its campus in Downtown Los Angeles. 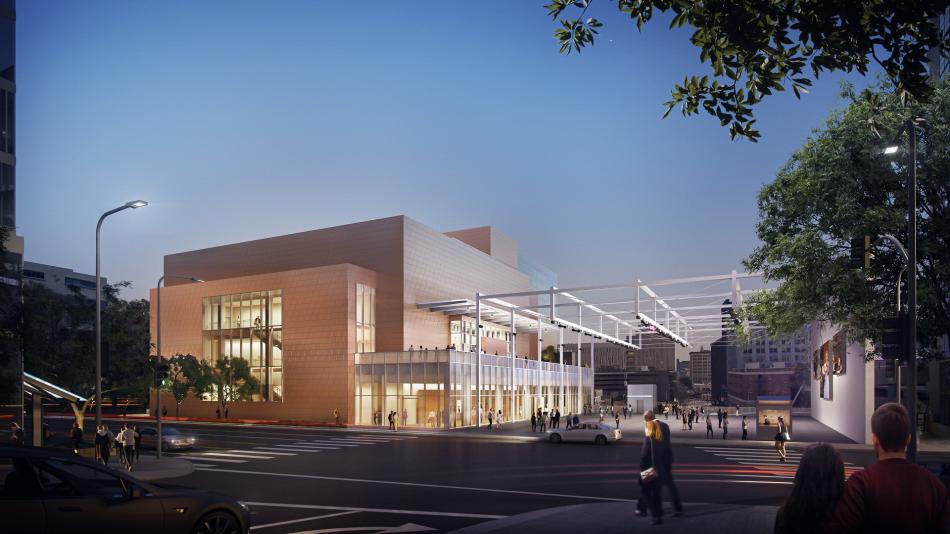 Rendering of the Colburn Center at the Colburn School. View East from Olive Street towards new urban plaza to be created at the entrance to the concert hall.Shimahara

The Colburn Center, which would rise from a property spanning the east side of 2nd Street between Olive and Hill Streets, would be highlighted by a new 1,000-seat concert hall capable of accommodating orchestra, opera, dance, and musical theater. Additionally, four professional-sized dance studios and a smaller 100-seat studio theater are planned, each surrounded with windows providing natural light into the facility.

Gehry's updated design for the project has been pared back from the more ambitious structure unveiled to the public in 2020. According to the Los Angeles Times, the original budget for the Center's concert hall was cut in half, resulting in the single structure rather than two performance venues with seating for 1,100 and 700 patrons. Likewise, plans for a shimmering glass facade have given way to an exterior which could consist of stainless steel, or if the budget allows, titanium with a pink tint. 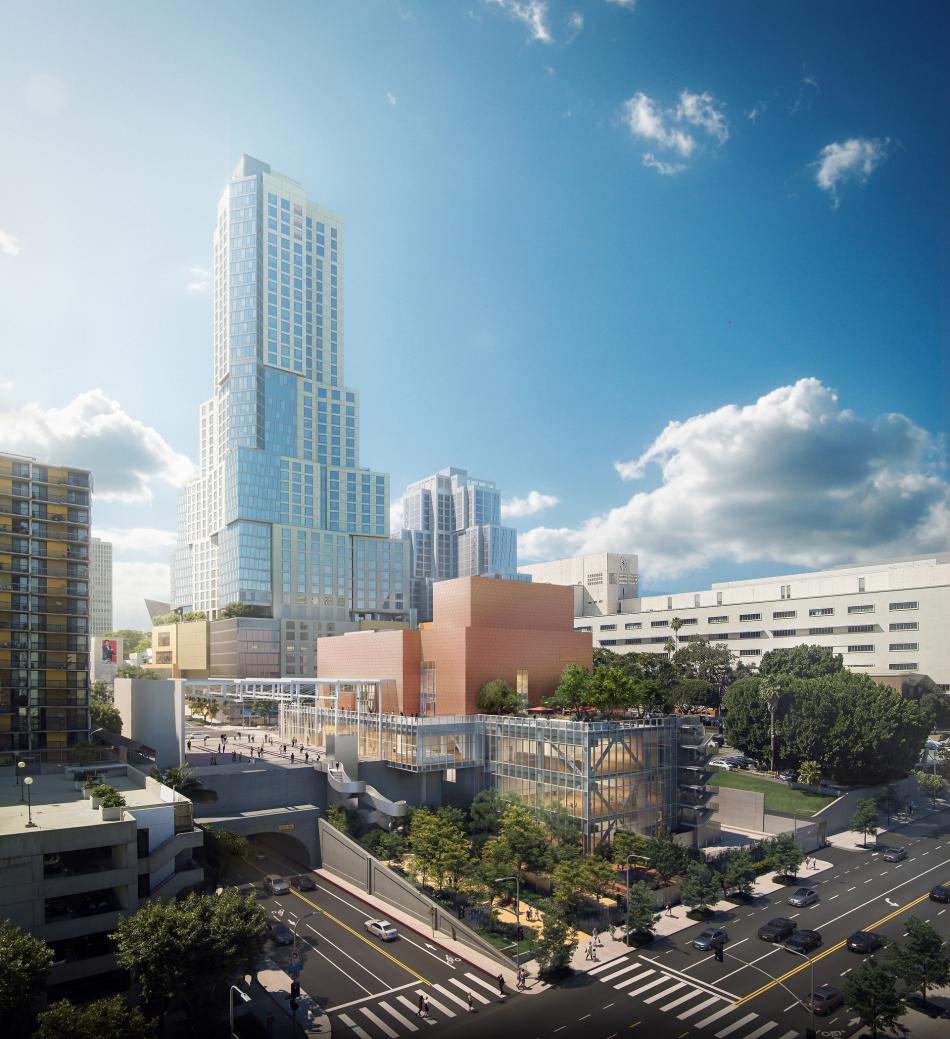 Rendering of the Colburn Center at the Colburn School. View from Hill Street and 2nd Street intersection. Shimahara

Although less grandiose than the earlier plan, the updated design also incorporates new open space into the project, including a roof garden above the studio theater, and a new landscaped area behind a gated entrance at Hill and 2nd Streets.  Additionally, the images show a new plaza at the intersection of 2nd and Olive Streets, replacing a small parking lot which the Colburn acquired in 2019.

To date, the Colburn has raised approximately $270 million for the project out of its estimated $350 million campaign. Major donors to date include Carol Colburn Grigor, who has led the campaign, and Terri and Jerry Kohl, whose names will adorn the concert hall. Funds from Eva and Marc Stern will also go toward the Colburn Conservatory of Music's flagship ensemble, which will have its first permanent home at the Colburn Center. 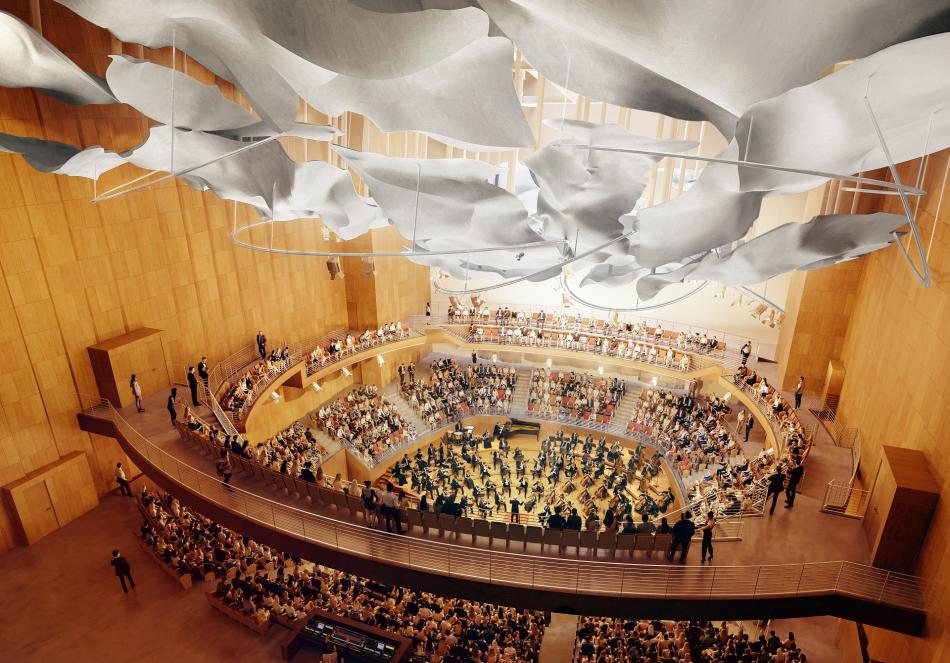 Rendering of Terri and Jerry Kohl Hall within the Colburn Center. Interior of 1,000-seat concert hall located on the west end of the project site.Shimahara

Construction of the project, which would rise across the street from the Colburn's existing campus, is expected to begin in 2023. The Colburn Center could host its first performances as early as Fall 2025.

“With great joy and excitement, we share the design of Frank Gehry’s multi-dimensional project, which will welcome our students, performing artists, and audiences from across Los Angeles,” said Colburn President Sel Kardan in a statement. “The Colburn Center is a physical manifestation of the School’s founding principle of ‘access to excellence,’ allowing Colburn to continue and expand our educational and performance activities in a design which breaks down barriers between audience and performer and reveals the educational process. We look forward to collaborating with our artistic partners in Terri and Jerry Kohl Hall, which complements the other stellar performance spaces in Downtown Los Angeles." 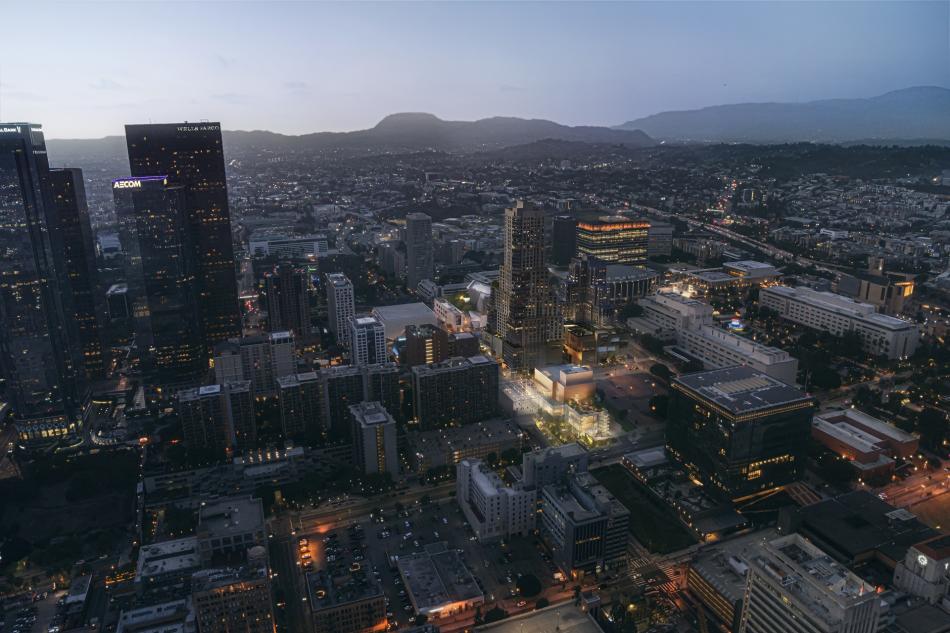 Though officially a separate project, The Colburn's expansion would complement the various components of the neighboring Grand Avenue project, which includes Grand Park, the Emerson apartment tower, The Broad contemporary art museum, and a Gehry-designed  hotel and condo complex now wrapping up construction on the opposite side of Olive.  A future phase of the Grand Avenue Project - a joint effort between developer Related Cos. and the City and County of Los Angeles - would transform the surface parking lot which borders the Colburn Center property to the east. Those uses also expand upon an existing "cultural corridor," along Grand Avenue, which also includes the Museum of Contemporary Art, the Music Center, and the Gehry-designed Walt Disney Concert Hall.