At a ceremony yesterday, Los Angeles officials and the Weingart Center broke ground on a project that is billed as the largest permanent supportive housing development in the city's history. 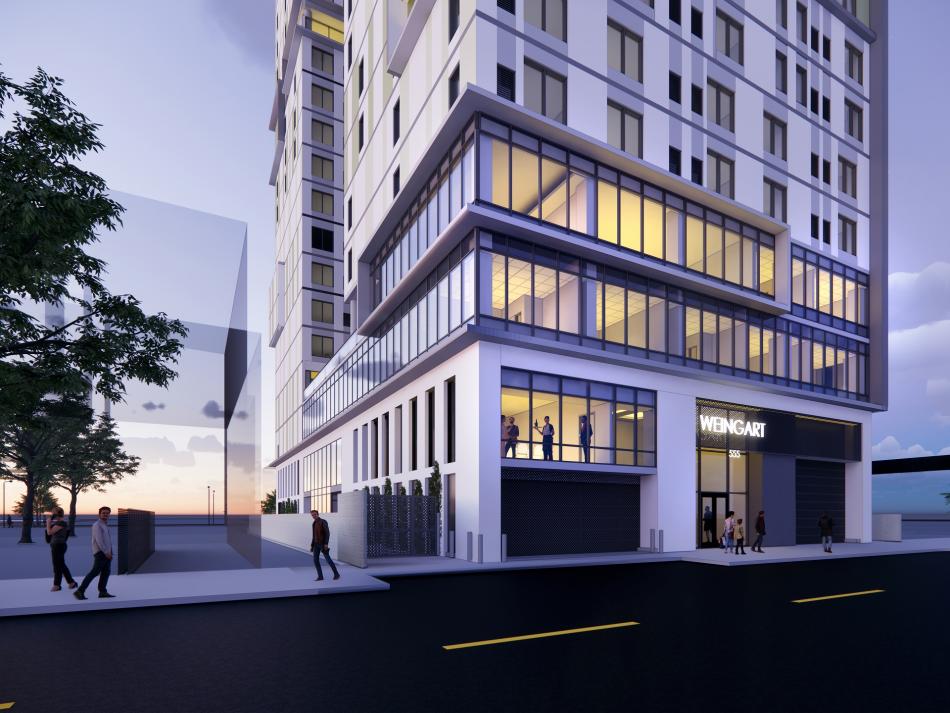 The more than $164-million project - which is being developed in partnership with Chelsea Investment Corporation - replaces a surface parking lot next door to the Weingart Center headquarters at 555 S. Crocker Street.  Plans call for a 19-story high-rise featuring 278 studio and one-bedroom apartments, all of which would be reserved for formerly unhoused persons save for three market-rate manager's units.

“Permanent supportive housing is a nationally-recognized and proven method of addressing chronic homelessness in our communities,” said former State Senator Kevin Murray, Weingart's president and chief executive officer in a news release. “We work with Los Angeles Mayor Eric Garcetti, City Councilman Kevin de Leon, County Supervisor Holly J. Mitchell, and the community-at-large to ensure that our programs and services not only meet our expectations, but our clients’ expectations as well.”

AXIS/GFA is serving as the project's architect, building off of a design concept developed by Joseph Wong Design Associates in 2016.  Emmerson Construction and Swinerton Builders are among the contractors on the project, while Project Management Advisors is serving as owner's representative for the Weingart Center.

The building, which will stand approximately 200 feet in height, will also include on-site supportive services, a ground-floor cafeteria, administrative offices, and subterranean parking for 15 vehicles.

According to a staff report issued by the Los Angeles Housing Department earlier this year, the apartments at 555 Crocker are to be restricted to formerly homeless residents earning between 30 and 50 percent of the Los Angeles area median income.  The per-unit cost is expected to range from $585,000 to $602,000, due in part to the use of Type I construction, the inclusion of subterranean parking, and a project labor agreement. 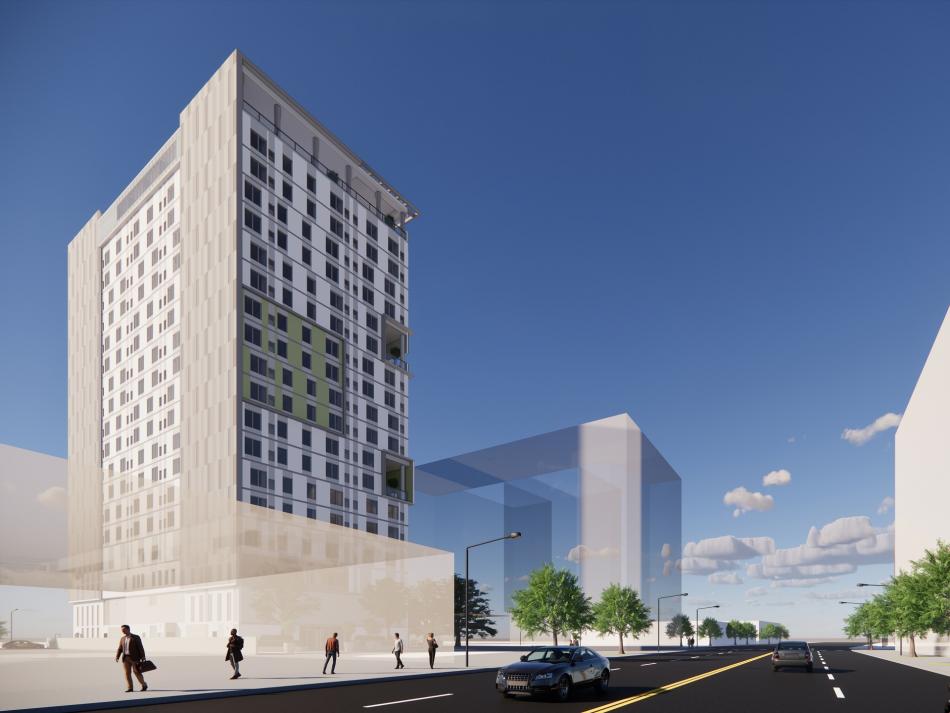 Financing for the tower comes from both public and private sources, including construction and permanent loans provided by Pacific Western Bank, tax credit equity invested by The Richman Group, and various government programs - including Measure HHH and Los Angeles County's No Place Like Home funds.

Swinerton has been tapped as general contractor for the project.

“Weingart Towers embodies everything we promised to Angelenos when they said ‘yes’ on Prop HHH and empowered us to build these comprehensive solutions to homelessness,” said Los Angeles Mayor Eric Garcetti in prepared remarks. “This development is a clear marker of how far we’ve come in our mission to deliver the high-quality, permanent supportive units that unhoused Angelenos urgently need and deserve — and is an extraordinary example of the type of project that will make real progress in this crisis.”

Financing for the housing has been coupled with grant funding through the state's Affordable Housing and Sustainable Communities program, which provides money for transportation infrastructure near infill projects that are expected to reduce greenhouse gas emissions.  The funds allocated to the Weingart Center project will be used for sidewalk repair and replacement surrounding the property, as well as the addition of more than two miles bike paths in Skid Row.  The projects planned near 555 Crocker include 20 crosswalks, 23 curb ramps, upgrades to existing street crossings at the intersection of 6th and San Pedro Street.  Additionally, plans call for new street lighting, bus stop lighting, pedestrian lighting, and bike repair stations within a half-mile radius of the project site.

Completion of the Weingart Center tower is expected in December 2023, according to a news release by Project Management Advisors.  Residents will be identified through the Los Angeles Coordinated Entry System. 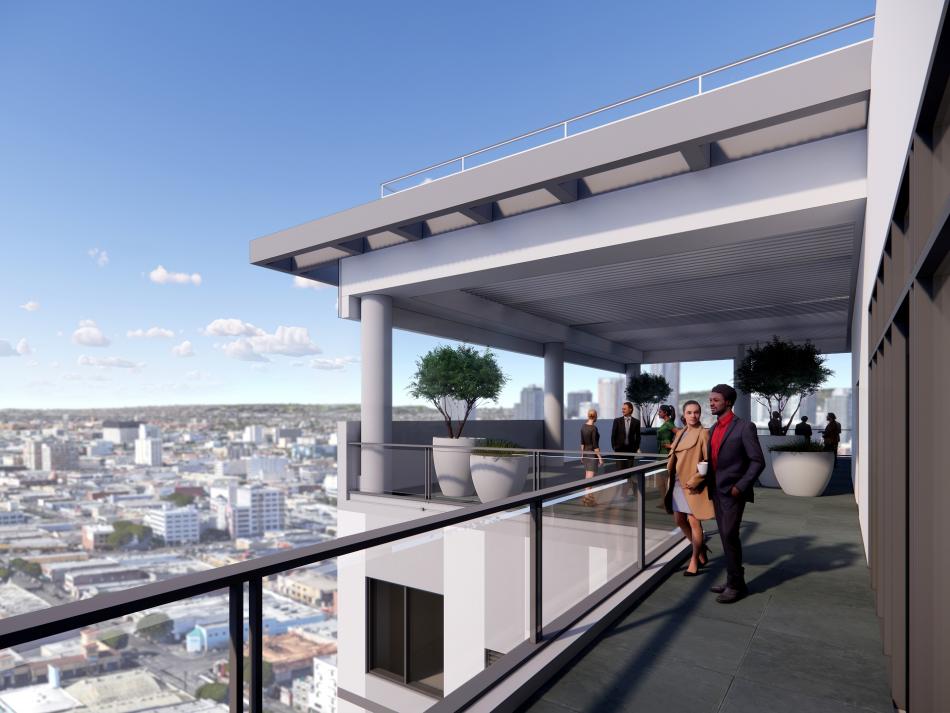 While the new construction may be the city's largest supportive housing development yet, it is not the last which Weingart Center has planned for the neighborhood.  The non-profit is also partnering with Chelsea Investment on plans for a 12-story building on an abutting site (a 104-unit development scheduled to break ground in Summer 2022), as well as a second 19-story high-rise on a surface parking lot across 6th Street.

Other non-profit organizations such as Mercy Housing, Skid Row Housing Trust, and the Downtown Women's Center are also developing supportive housing on nearby sites.