A surface parking lot in Downtown Long Beach has been cleared of asphalt, as developer Alliance Residential begins work on a mixed-use apartment building next to the Promenade.

Broadstone Promenade, approved by the Long Beach Planning Commission in 2018, will rise from a roughly .89-acre property located at 127 E. Broadway.  Plans call for the construction of an eight-story building featuring 189 studio, one-, two-, and three-bedroom apartments above 10,000 square feet of ground-floor retail space and 257 parking stalls in a three-level subsurface garage. 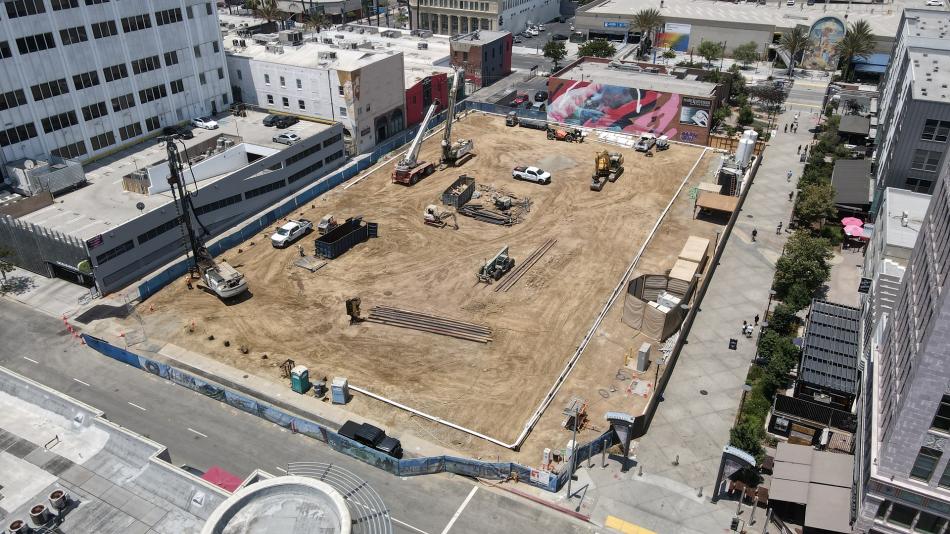 Studio T-Square 2 is designing the podium-type building, which will have a U-shaped footprint above its concrete base, and open-air decks at its roof and above its third floor.

The design of Broadstone Promenade makes references to the nearby Long Beach waterfront, according to a design narrative provided by Studio T-Square 2, including an illuminated tower in the vein of a lighthouse.  An undulating canopy above the first floor is inspired by waves on the beach.

The apartment building has been under construction since June, and is on pace for completion in Summer 2023 according to Henry Tong with Studio T-Square 2.

Although Phoenix, Arizona-based Broadstone will developer the project, the land was entitled for development by local firm Raintree Partners along with a sister project one block east on Long Beach Boulevard.

Both sites sit to the west of a more than $200-million project now being built by Onni Group that will create more than 400 apartments between 3rd Street and Broadway.