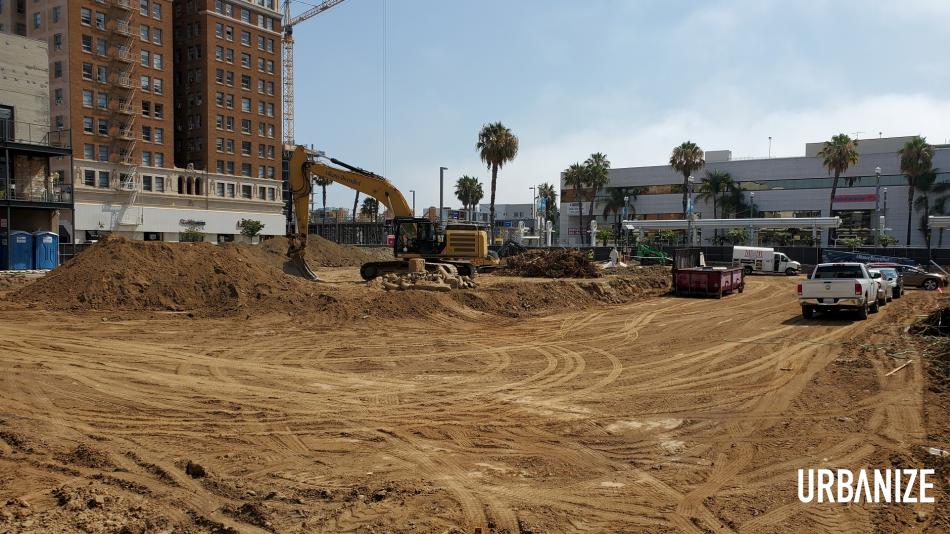 Crews recently stripped away asphalt at the southwest corner of Broadway and Long Beach Boulevard, where Orange County-based developer Raintree Partners has secured approvals to develop an eight-story apartment complex called Aster.  The mixed-use building, which has been in the works since at least 2018, will include 218 studio, one-, and two-bedroom apartments - ranging from 470 to 1,435 square feet in size - above roughly 7,300 square feet of ground-floor commercial space and a two-level, 312-car subterranean parking garage.

Carrier Johnson + Culture is designing Aster, which would be a contemporary podium-type building with an exterior of cement plaster and metal panels.  Along Broadway, the project would include brick veneer into the facade of its lower three floors, matching the exterior of an adjoining historic building to the west.  Architectural plans show a mix of on-site amenities, including two outdoor decks at the podium level, a roof terrace, a fitness center, and a club room.

According to a street closure notice distributed earlier this month by the Downtown Long Beach Alliance, construction of Aster is expected to occur over an 18-to-24-month period, placing its scheduled completion date in the second half of 2023.

Construction of Aster comes close on the heels of the groundbreaking for Broadstone Promenade, a similar 189-unit apartment complex rising less than one block west at 127 E. Broadway.  That project was entitled to Raintree, but sold to developer Alliance Residential.

The Aster project site, in addition to sitting across the street from the Metro A Line's 1st Street Station, is also located diagonally across Broadway and Long Beach Boulevard from the Broadway Block, a $215-million housing and retail complex now being built by Onni Group.