An environmental study published earlier this week by the Los Angeles Department of City Planning offers a sign of progress for Continuum Partners and Platinum Equity' latest office building in the Arts District. 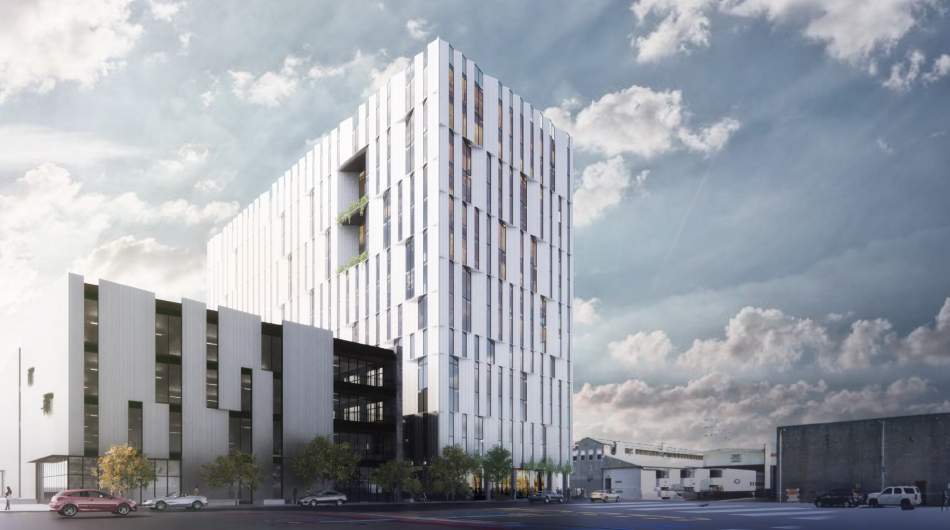 The project, planned at 655 Mesquit Street, would replace the parking lot of Produce LA - another office building which the two companies completed earlier this year.  Plans call for the construction of a 14-story building which would feature nearly 185,000 square feet of offices above 4,325 square feet of ground-floor retail space.

Designed by EYRC Architects, the proposed building would stand approximately 195 feet in height, eclipsing its next-door neighbor.  Renderings show the building with an exterior of corrugated metal, concrete, and glass and a rooftop amenity deck.  At street-level, plans call for an L-shaped pedestrian paseo to cut through the property, connecting Mesquit and Jesse Street.

The tower would be accompanied by 397 parking spaces - slightly over the code-required minimum for the amount of office and retail space proposed.  The new garage - consisting of two subterranean levels and five above-grade levels - would connect to the underground garage of the adjoining Produce LA building, according to plans.

Construction of 655 Mesquit will first require the approval of discretionary entitlements by the City of Los Angeles - including a zone change and a general plan amendment.  Per the environmental report, construction of the tower is expected to occur over a roughly two-year period, with completion set to occur as early as 2025.

The project, which would rise just south of the new Sixth Street Viaduct, joins more than a half-dozen large office projects slated for the Arts District, which has seen its cachet rise due to the arrival of companies such as Warner Music Group and Spotify.  Vancouver-based Onni Group is planning 187,000 square feet of offices as part of its 2143 Violet Street development, and similar projects from Jade Enterprises, Hines, and Tishman Speyer.  Los Angeles-based Lowe topped out on a nine-story, 113,000-square-foot office building earlier this year.