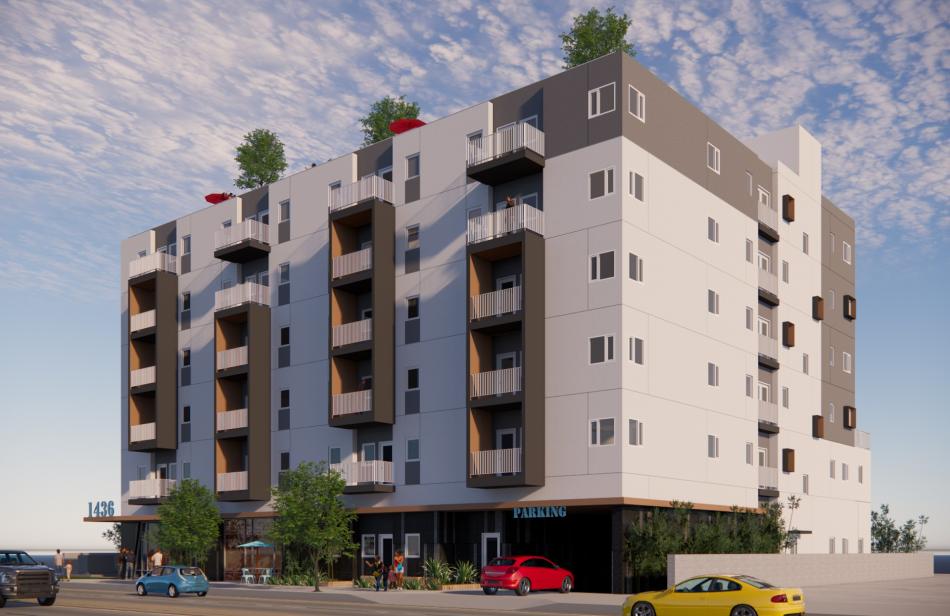 Earlier this month, an entity affiliated with Orion submitted an application to the Planning Department seeking entitlements for the construction of a new apartment complex near the intersection of Jefferson Boulevard and Normandie Avenue.  Plans call for razing a single-family home and two small commercial buildings at 1436-1450 W. Jefferson Boulevard, clearing the way for the construction of a new six-story edifice featuring 54 one-, two-, and three-bedroom apartments above subterranean parking for 27 vehicles.

Orion has requested the approval of density bonus incentives permitting a larger structure with less on-site parking than required by zoning rules.  In exchange, six of the proposed apartments would be set aside as deed-restricted affordable housing at the very low-income level.

Next Architecture is designing the project, named for its address at 1436 Jefferson, which would be a contemporary podium-type building highlighted by cantilevered balconies and rectangular protrusions.  Architectural buildings show that resident amenities would be placed at street level along Jefferson, with additional open space provided through a central courtyard, a gym opening onto a rear yard, and a rooftop terrace deck.

The project is one of several new developments in Exposition Park from Orion Capital and Next Architecture, joining new apartment buildings now under construction near Vermont Avenue's intersections with Adams and Exposition Boulevards.

Other firms with projects in the near vicinity include Kansas-based Prime Place, which is building a six-story, 130-unit apartment complex a few blocks east at 1320 W. Jefferson Boulevard.