An entitlement application filed with the Los Angeles Department of City Planning provides a first look at plans to redevelop a corner property in Westlake with multifamily housing at commercial space. 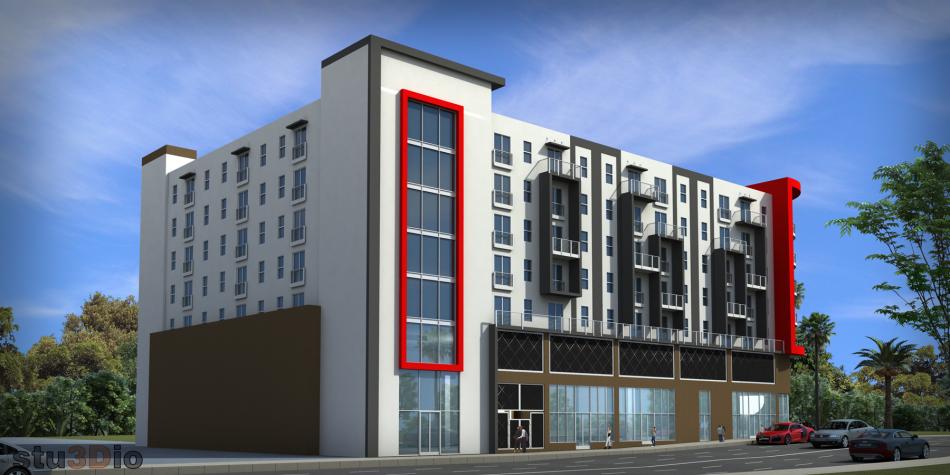 View of the Legacy looking northeast from 6th StreetIcon & Ikon

Beverly Hills-based real estate investor Elias Shokrian is seeking approvals to raze a trio of small commercial buildings at the northwest corner of 6th Street and Union Avenue, clearing the way for the construction of a new seven-story edifice featuring 100 apartments above approximately 11,800 square feet of ground-floor commercial space.  Plans call for 117 parking stalls, to be located on one subterranean level and two podium levels.

In exchange for Transit Oriented Communities incentives - permitting a larger structure than otherwise permitted under zoning rules - 10 of the proposed apartments would be set aside as deed-restricted affordable housing at the extremely low-income level.

Hawthorne-base architecture firm Icon & Ikon is designing the project, named The Legacy, which is depicted in renderings as a contemporary podium-type building clad in white stucco with boxy protrusions colored black and red.  Architectural plans show a U-shaped building featuring studio, one-, and two-bedroom floor units, with amenity decks placed at the podium and roof levels.

The legacy is slated for a bustling stretch of 6th Street between Downtown and MacArthur Park, flanked on both sides by small commercial buildings housing independent shops and restaurants.  Several large developments have been built along the corridor in recent years, including the Paseo at Californian affordable housing complex at 6th and Bonnie Brae Street and the Be DTLA apartments at Bixel Street.  Another mixed-use building is now under construction a few blocks west of The Legacy site at 6th Street and Westlake Avenue.