The $1.5-billion project, which began work in July 2020, will stretch service on the L Line an addition 9.1 miles from its current terminus in Azusa to Pomona.  Plans call for four new stations, including stops in Glendora, San Dimas, La Verne, and the future terminus adjacent to the Pomona North Metrolink station.

“In addition to reaching substantial completion on the design for this important project this month, the project is now more than one-third complete overall - an extraordinary achievement accomplished during extraordinary times,” stated Pomona Mayor Tim Sandoval, chair of the Foothill Gold Line Construction Authority board, in a news release. “More than 300 people have been working full time on the project, including dozens of engineers that have focused on completing the design for nearly two years. Altogether, their efforts have allowed the project to move forward at an impressive pace - even as COVID-19 presented unique and unprecedented challenges.” 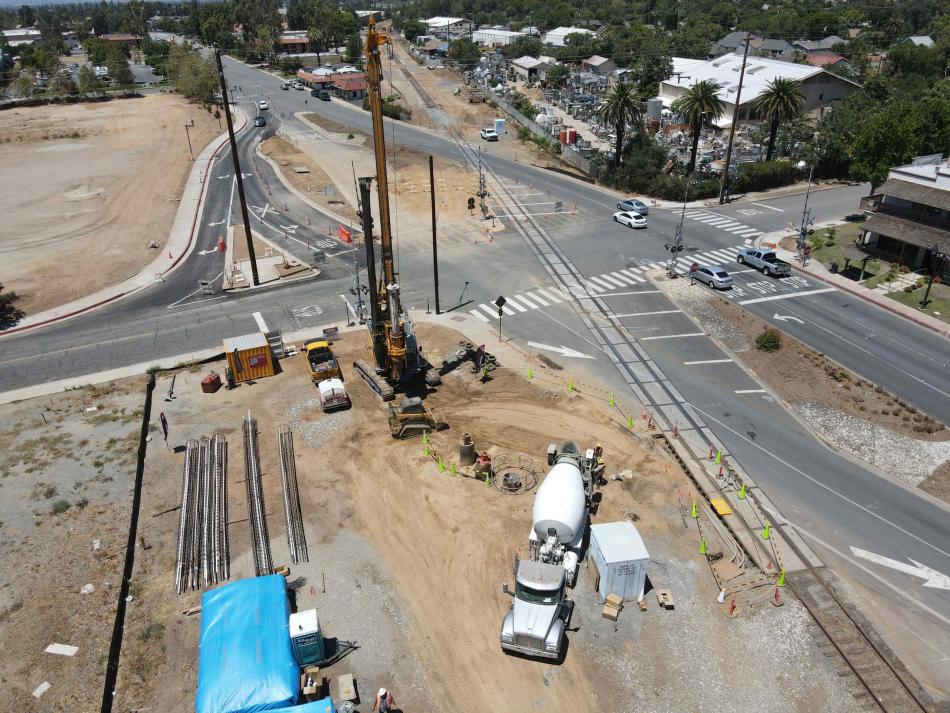 The extension will operate entirely within an existing freight rail right-of-way, although design-build contractor Kiewit-Parsons is adding 19 bridge structures and grade separation elements to the corridor.  According to the Construction Authority, the ongoing work is currently six months ahead of schedule based on its substantial completion deadline of January 2025.

While the under-construction extension may be proceeding ahead of schedule, it represents a pared back plan relative to the original plan for the Foothill extension, which would pushed service on the L Line an additional three miles east past the San Bernardino County line.  Under the current design-build contract, Kiewit-Parsons could complete the entire extension - including two additional stops in Claremont and Montclair - if funding is secured by October 2021.

The full project, as well as proposed extensions serving Burbank and Ontario airports, have received the backing of San Gabriel Valley elected officials such as State Assemblymember Chris Holden.

At the opposite end of the Gold Line in East Los Angeles, Metro is also working on a second extension which could take trains as far as Whittier by the mid-2030s.  However, by the time that extension is scheduled for completion, the Gold Line will have been split by the new service patterns planned following the opening of the Regional Connector subway in Downtown.