In a deal announced last week, the Housing Authority of the City of Los Angeles (HACLA) has partnered with private real estate firm Avanath to purchase the Baldwin Village Apartments, a collection of 669 apartments near Crenshaw Boulevard.

HACLA, through the non-profit La Cienega LOMOD, Inc., will place a deed restriction on 468 of the apartments which will restrict half to households earning up to 60 percent of the area median income level, and 80 percent for the other half. The apartments include a mix of studio, one-, two-, and three-bedroom units, and the deed restriction will remain in place for a period of 55 years.

The project was enabled by a statutory exemption from property taxes on affordable units in the State of California. HACLA has provided a loan to support the acquisition, the remaining funding for the purchase coming from a Fannie Mae loan and equity raised by Avanath. The total sales price for the property is $220 million, according to a staff report to the HACLA Board of Commissioners. 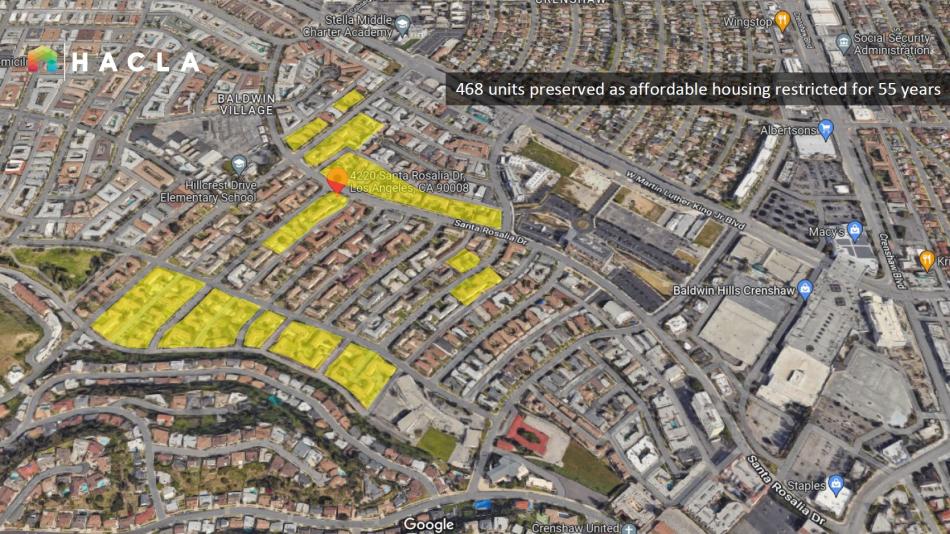 “HACLA is thrilled to partner with Avanath in addressing the City of Los Angeles’ housing crisis by adding almost 500 units of long-term deed restricted affordable housing,” said HACLA president and chief executive Doug Guthrie in a statement. “This is a wonderful example of the impact HACLA seeks to achieve through the Innovative Partnerships Solicitation program we released last year – and we look forward to partnering on many more deals like this in the future.”

According to Costar data, the Baldwin Village community is the 12th largest privately-owned apartment complex within Los Angeles city limits, and following the deal, will have the largest number of non-age restricted affordable housing units available to families. The property consists of multiple buildings completed between 1948 and 1955, and was previously unrestricted.

Changes in the surrounding neighborhood have put upward pressure on rents at Baldwin Village, as the completion of the Crenshaw/LAX rail line nears, and a proposed redevelopment of the Baldwin Hills Crenshaw Plaza shopping mall with housing, offices, and other commercial uses is expected in the near future.