One year ago, flush with a slice of the $700 million in unused funds from the scuttled 710 extension, Los Angeles city officials kicked off community outreach for a new project which could remake a four-mile stretch of Valley Boulevard between through Lincoln Heights and El Sereno. A presentation given during a virtual community meeting last week provide a first glimpse of what could be coming to the corridor, which connects Cal State L.A., L.A. County + USC Medical Center, and Union Station. 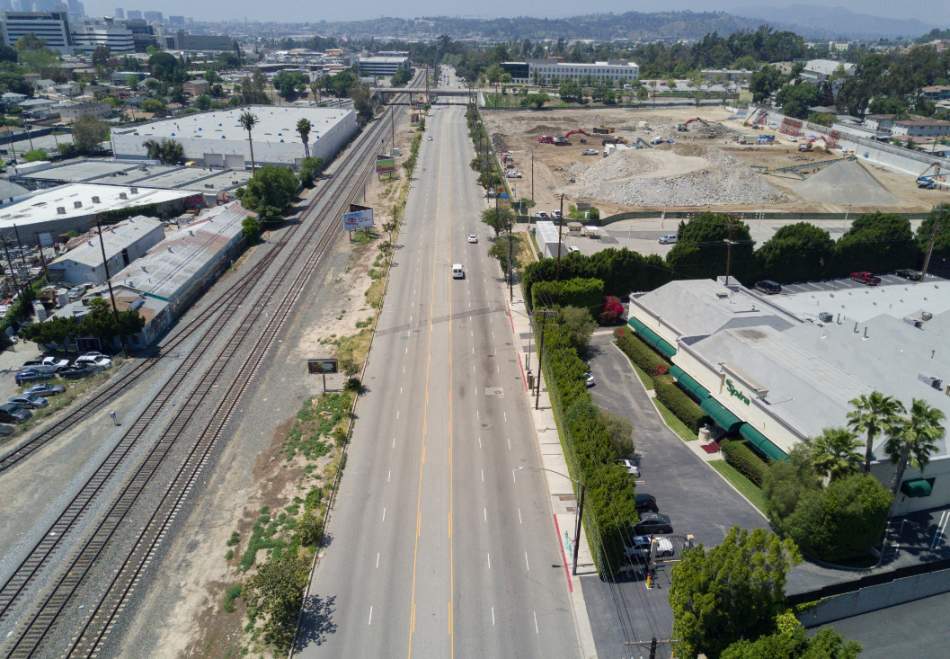 The project area is home to more than 55,000 residents, the vast majority of whom identify as Hispanic.  More than half of households speak Spanish, although English, Asian, and other Pacific Islander languages are also prevalent.

Likewise, the corridor sees heavy traffic, with an average of 17,000 to 24,000 cars per day, but also suffers from degraded roadway and sidewalk infrastructure (and a lack of connectivity for pedestrians and cyclists). Bus routes within the corridor run every 12 to 20 minutes on average, with many stops placed in inaccessible locations.

The plan to revamp the project corridor is split into three segments:

While dedicated curbside bus lanes are envisioned along almost the entire length of the corridor, a handful of design options are envisioned which could impact how the project impacts pedestrians, cyclists, and even a stretch of freight rail right-of-way that parallels Valley Boulevard. 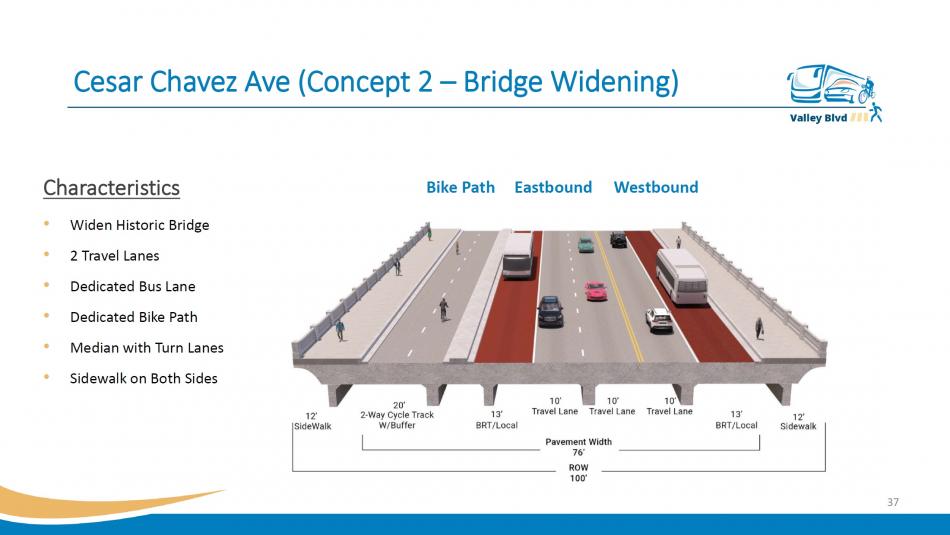 One area up for discussion is the Cesar E. Chavez Avenue Viaduct, where the project could either expand the existing bridge to create space for bi-directional bus and bike lanes, or create a new dedicated cycle and pedestrian bridge adjacent to the historic L.A. River crossing.

Officials are also considering multiple routes for accessing the L.A. County + USC Medical Center complex, with buses routed along either Marengo Street or State Street. The project also conceives of a new gateway to the medical center at Mission's intersection with Zonal Avenue on its western side, with new BRT stops accompanied by protected bicycle infrastructure and public art. 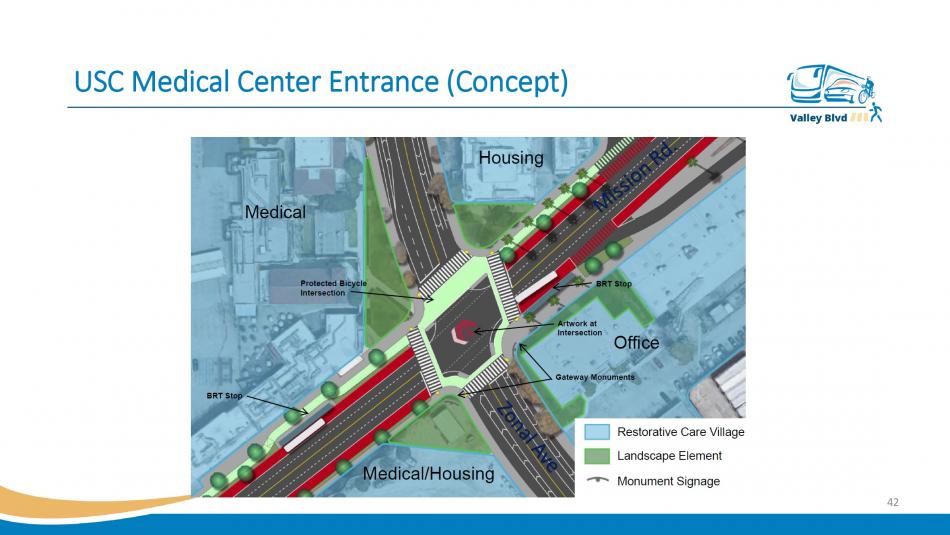 North of the hospital, where the BRT corridor would veer onto Valley Boulevard, which is flanked by a busy freight rail corridor. The project is considering two alternatives for potentially grade separating those tracks, including elevating the eastbound side of the street to allow vehicles to cross above the tracks, or placing the railroad in a trench that runs below grade. Either option would create new public open space, either by expanding nearby Lincoln Park through road closures, or by potentially by capping the trench with a greenway.

In the third segment, the project includes options to improve connectivity between Cal State L.A. and the surrounding neighborhood, including a new gateway entrance flanked by a BRT stop at Mariondale Avenue, as well as a new pedestrian bridge at Beatie Place which span across the adjacent railroad corridor to connect with Alhambra Avenue. 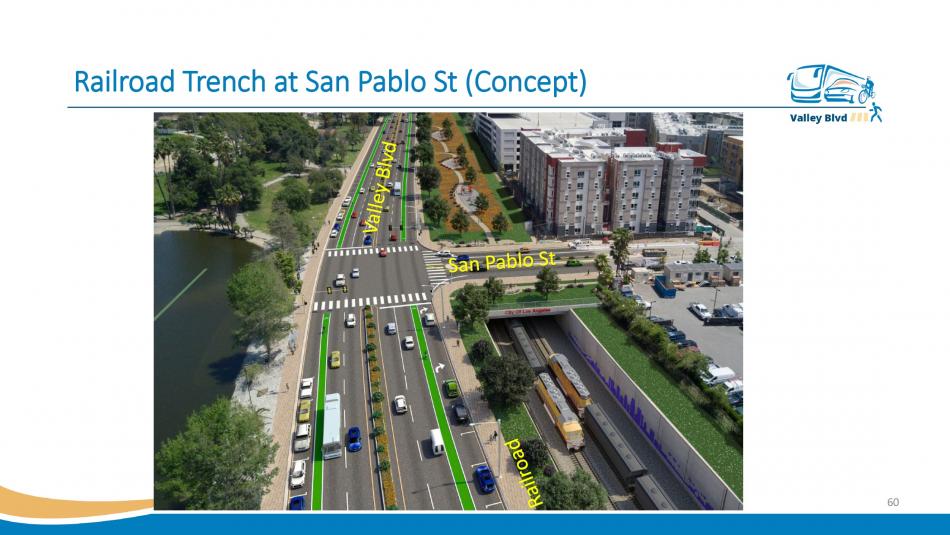 Lastly, at the far east edge of the project corridor, a long-empty patch of land once slated for the 710 extension would see new life under the plan. Rather than giving way to more highway, the project proposed that the patch of land be converted into new park space, accompanied by roughly 150 units of multifamily housing, as well as parking and a bus stop. That vision dovetails with a plan from Los Angeles leaders to redevelop government-owned properties acquired in anticipation of the freeway's construction, which was officially cancelled in 2018.

Nonetheless, these improvements remain a ways off on the horizon. Per an attendee of the meeting, the project's environmental review phase is expected to last five years, with a three-year design period to follow. Construction would begin afterward, subject to the availability of funding. 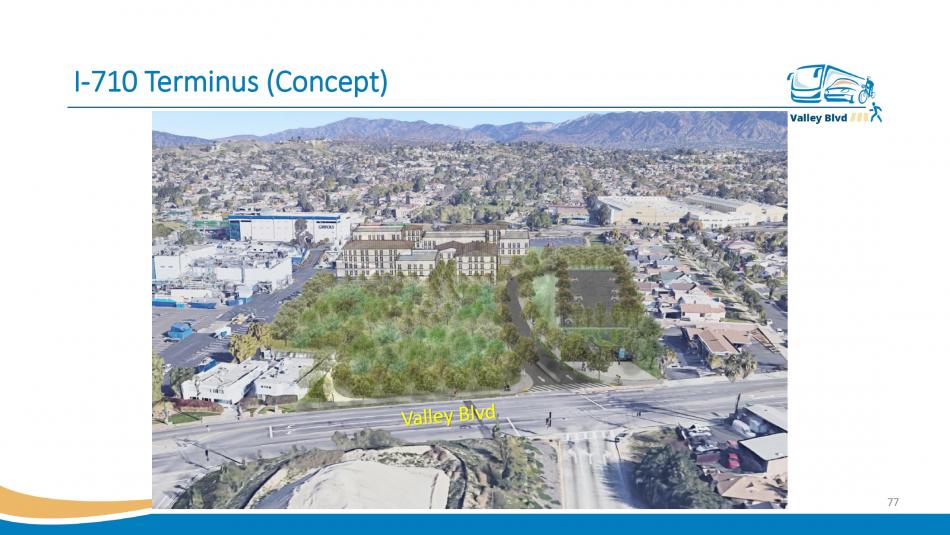 Valley Boulevard's makeover isn't the only active transportation project tapping money from the cancelled 710 extension. Los Angeles city officials are also working on similar revamps for Huntington Drive and Eastern Avenue, while light rail, bus rapid transit, enhanced Metrolink service, and other improvements could be coming to cities in the San Gabriel Valley.