Plans for yet another big office building are inching forward in Hollywood, according to an initial study published by the City of Los Angeles.

Just over one year ago, the Cooper Family and Plus Development announced their intent to build an eight-story edifice at 1235 N. Vine Street. The proposed structure, slated for a currently empty site, would include 109,000 square feet of offices atop 7,960 square feet of ground-floor retail spaces.  Plans also call for a 235-garage with four subsurface levels and two fully-enclosed podium levels. 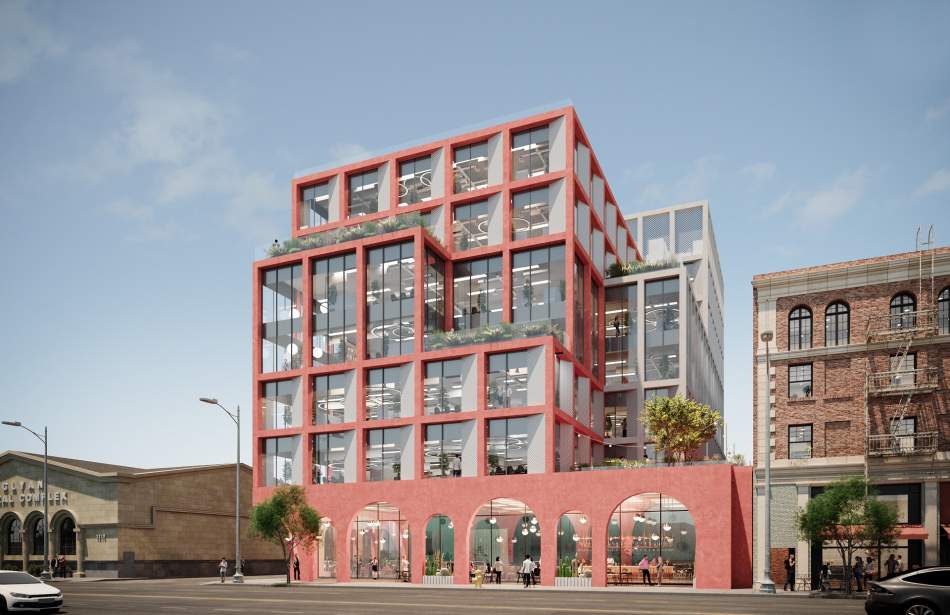 Hawkins\Brown Architects is designing the project, which would rise from an empty lot at Vine and La Mirada Avenue.  Renderings show a grid-like facade on the upper floors of the structure, contrasted by a series of arched openings at street level.  The building, which would be clad in materials including metal, glass, and pigmented concrete, would used staggered roof lines to create a series of terrace decks and complement adjacent structures such as Villa Elaine.

Pending project approvals, including a general plan amendment and a zone change, construction of 1235 Vine is expected to begin as early as 2022.  Completion is expected by 2025, according to the initial study.

The project is one of two large Hollywood office developments proposed by the Cooper Family, joining a 10-story, 150,000-square-foot development planned at 1000 Seward Street.  That mid-rise structure is also slated for completion in 2025.

The L.A. Business Journal recently reported that the Coopers currently have seven active projects in developments, including offices buildings and apartment complexes.  The family is working with Hawkins\Brown on two additional projects in North Hollywood and Burbank.

The Vine Street project emerges as campus-type developments in Hollywood have become desirable destinations for media and technology companies.  Netflix has leased multiple nearby properties, including Kilroy Realty's On Vine development just a few blocks north.