Four years ago, Hollywood Presbyterian Medical Center's $400-million, 10-year expansion kicked off with the construction a new parking garage located just east of the main hospital campus.  Now, CHA Health Systems is taking another step toward the realization of its master plan. 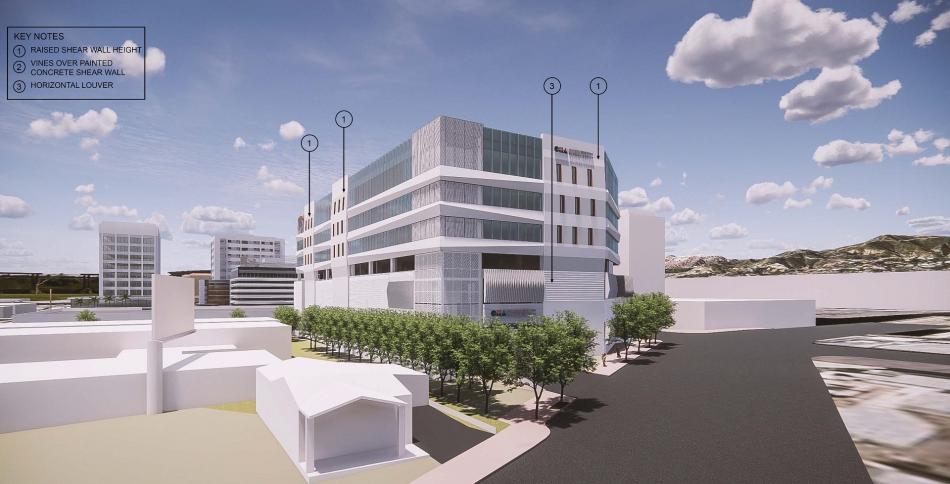 On October 26, the Central Los Angeles Area Planning Commission is will consider a proposal to add nearly 96,000 square feet of medical office space to the hospital, which would be built above the parking structure at 1321-1323 N. Virgil Avenue.  The existing garage, which includes 562 parking stalls in two subterranean levels and five above-grade levels, will add three new floors, making it an eight-story building.

KMD Architects is designing the project, which would be clad in a mix of glass, white metal panels, and painted concrete, similar to the finishes of the existing garage.  Proposed new uses would include clinic space, a pharmacy, a small amount of retail, and diagnostics and imaging equipment.

A staff report recommends that the Area Planning Commission should approve the project, including a requested exemption from the pedestrian throughway requirement of the Vermont Western Station Neighborhood Area Plan.

Besides the new medical offices planned above the parking garage, Hollywood Presbyterian is also slated to open a new, $200-million patient tower this year.

Hollywood Presbyterian is not the only hospital in East Hollywood primed for expansion.  A block north at Vermont Avenue and Sunset Boulevard, Kaiser Permanente is planning to add 433,000 square feet of space to its flagship Los Angeles Medical Center.