A year after our last update, the wrapping has come off of a mixed-use development from 4Site Real Estate near the Los Angeles River in Lincoln Heights. 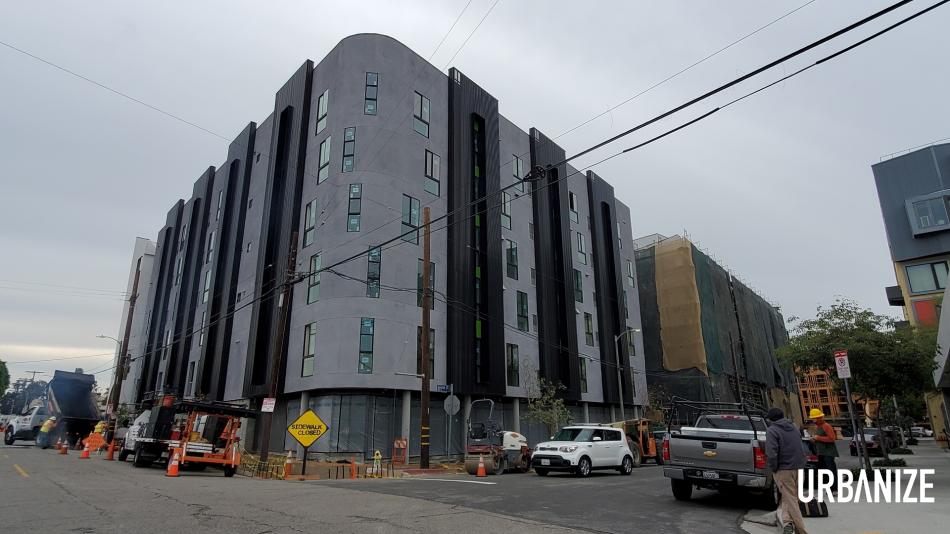 The project, located along the south side of Barranca Street between San Fernando Road and Avenue 21, is composed of a six-story building that will feature 102 apartments, a 100-room hotel, and 5,000 square feet of ground-floor retail space at completion

The apartments, which will come in a mix of one- and two-bedroom floor plans, will include 45 live/work units and five extremely low-income affordable units.

Designed by Tighe Architecture, the project appears as two different structures split between the hotel and the apartments. The hotel, which faces San Fernando Road, has jagged roofline and arched openings along its ground floor.  The housing, which fronts Avenue 21, includes rounded corners and metal accents.

4Site is an active developer with several mixed-use and multifamily residential buildings in Westlake, and several other neighborhoods in central Los Angeles.

The under-construction development sits just south of properties owned by the Los Angeles Bureau of Sanitation and Goodwill Southern California, which have considered partnering to develop on a mixed-use campus featuring offices, commercial space, and affordable housing.