Just west of Pasadena City College, a retooled development that would replace a shuttered used car dealership with a hotel and multifamily housing is up for its first vote at the city's Design Commission.

In 2016, applicant J&K Plus Investments, LLC - an entity affiliated with San Gabriel-based developer Landwin Investments - was approved by the Pasadena City Council to construct a pair of low-rise buildings at 1336 and 1347-1355 E. Colorado Boulevard, including a 375-key hotel with subterranean parking 49-unit residential building with 21,000 square feet of ground-floor commercial space.

The updated plan for the site, now designed by ACRM, would include an eight-story hotel building located on the north parcel at the intersection of Colorado Boulevard and Hill Street, and a five-story residential building on the south parcel at Colorado and Holliston Avenue. Plans show tiered roof lines to match the scale of existing buildings, as well as a series of courtyards and terrace decks to provide open space for residents and hotel guests.

More than 1,000 parking stalls are planned in three- and four-level subterranean garages, the bulk of which would sit beneath the hotel.

A staff report describes the design of the proposed hotel on the north parcel as contemporary with Art Deco references, while the neighboring apartment building is depicted in the Mediterranean style. The report, noting that the project has already undergone revisions to reflect earlier comments from the Design Review Board, recommends approval of its design concept, with the project still subject to a final review at a later date.

Landwin, the development firm, is also behind a mixed-use development featuring a Hyatt Place hotel and branded condominiums now under construction on Valley Boulevard in San Gabriel. 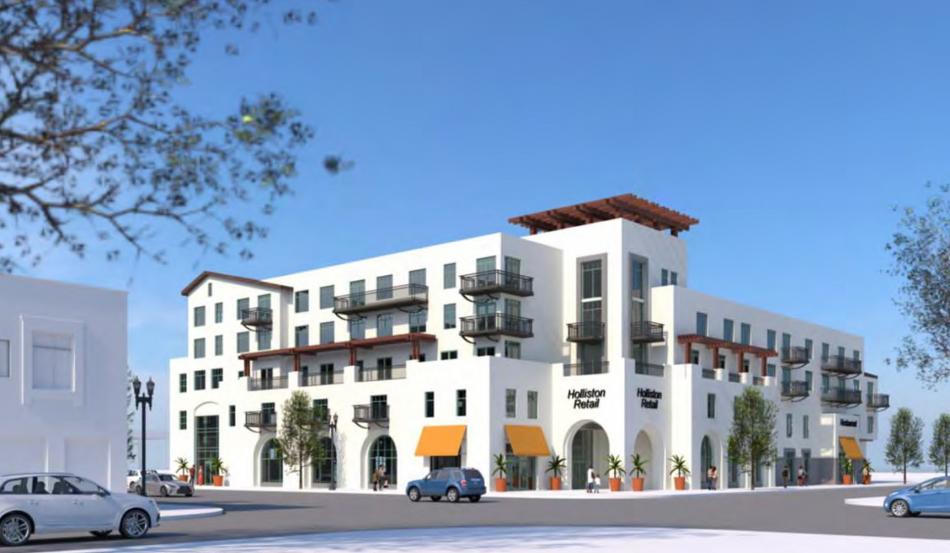