Efforts to speed up the street-running segments of one of Los Angeles County's busiest light rail lines are starting to bear fruit.

Since October 2019, the Los Angeles Department of Transportation (LADOT) has studied the causes for service delays on the Expo (E) Line, which shuttles passengers between 7th Street/Metro Center Station in Downtown Los Angeles and Downtown Santa Monica.  While pre-pandemic ridership on the E Line eclipsed 60,000 daily passengers, the largely at-grade route has been plagued by frequently unreliable service since its debuts in 2012. 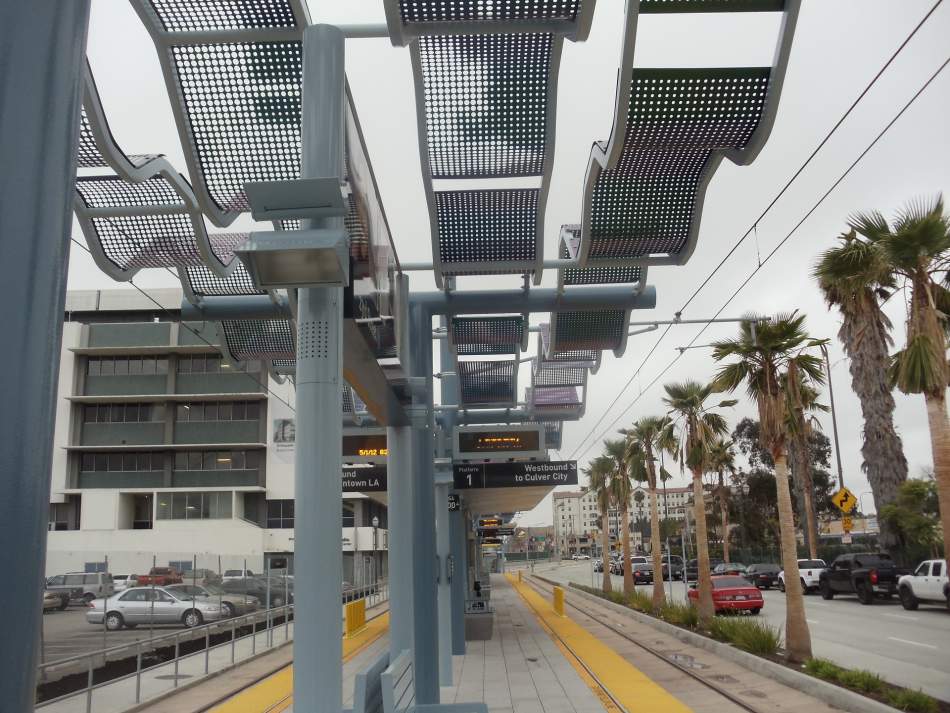 One of the first fixes implemented by LADOT was an extension of the green light signal at E Line's street-level crossing of Normandie Avenue.  Modified timing allowed trains to cross the intersection without stopping 79 percent of the time, up from 58 percent prior to the change.  This had the effect of reducing average delays in service from 27 seconds to 17 seconds.

According to a report scheduled for review at the June 15 meeting of the City Council's Transportation Committee, LADOT's latest experiment expanded the revised signal timing to the intersection of Flower Street and Adams Boulevard, where E Line trains compete not just with cross traffic on two busy streets, but also with motorists entering and exiting the US-110 freeway.  According to the report, the time savings gleaned from the new signal timing are as follows:

The intersection of Flower Street and Adams BoulevardGoogle Street View

The end goal of LADOT's signal coordination efforts is to achieve 90 percent travel time reliability across the full E Line.

Separately, the Metro Board of Directors has taken steps to address delays on the A and L Lines - the two other existing light rail lines with long segments of at-grade track.  Outside of improved signal timing, some of the strategies under consideration include increased speed limits and potentially grade separation and problem spots.