Construction is now 50 percent complete at the first phase of Hollywood Park, the immense mixed-use development centered on SoFi Stadium in Inglewood. 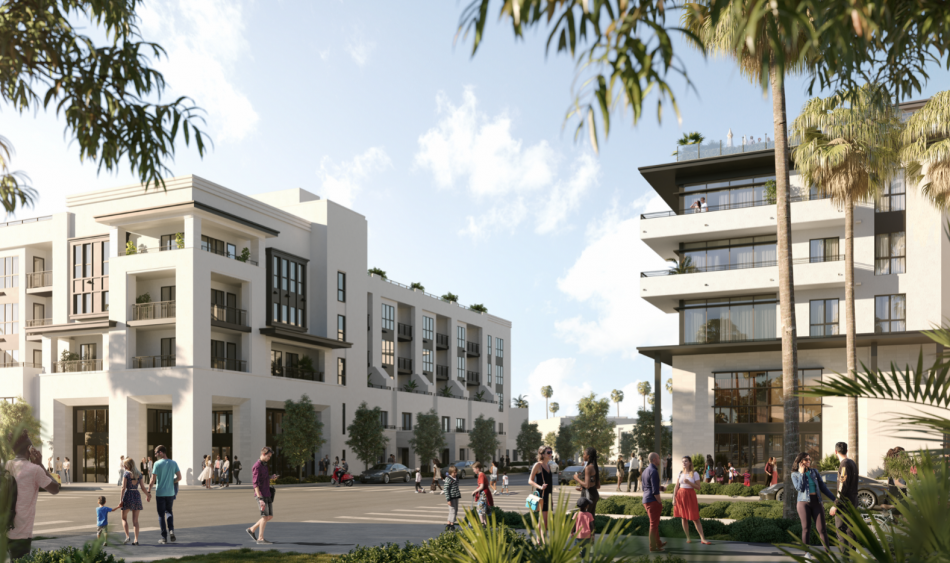 Spanning a 300-acre property at the northeast corner of Prairie Avenue and Century Boulevard, the project from Los Angeles Rams owner Stan Kroenke is billed as the largest mixed-use project on the West Coast.  A full buildout of the development will include: 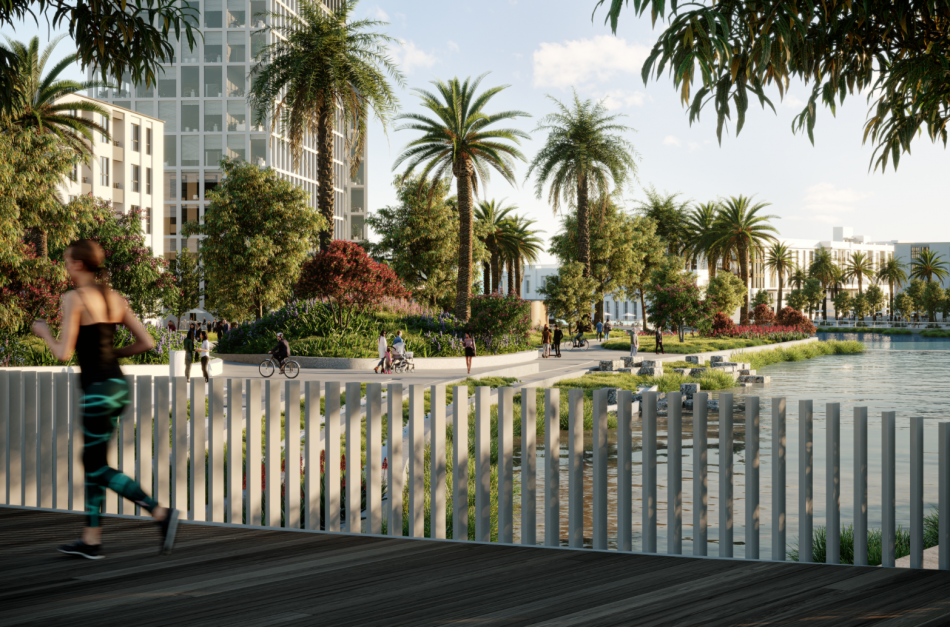 In addition to SoFi Stadium, the home of the Rams and the Los Angeles Chargers, the development also centers on a six-acre artificial lake, which will be connected to the rest of the site through 25 acres of new park space and landscaped plazas.

Construction is ongoing for the project's first office building - a 380,000-square-foot structure with flanks SoFi Stadium.  The Gensler-designed structure, which is scheduled to open this year, is slated to become the new West Coast headquarters of the NFL, which has leased nearly 290,000 square feet of space to house the NFL Network, NFL.com, the NFL app, and NFL Redzone.

An additional 500,000 square feet of office space is planned, with the expectation that the additional buildings would be geared toward media, technology, and entertainment industry firms with an interest in located near the SoFi Stadium. 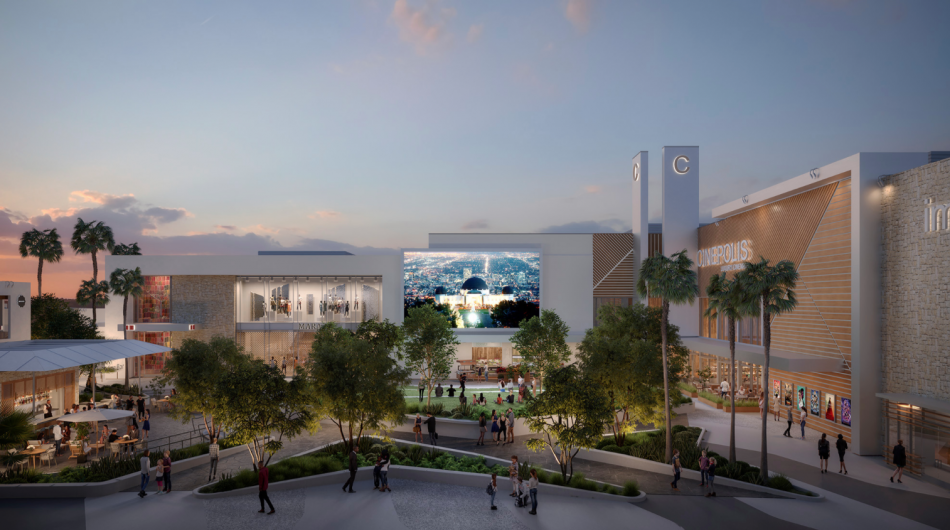 Construction is currently in progress for 320,000 square feet of retail space at Hollywood Park's shopping district, which will eventually total 500,000 square feet in size.  Announced tenants for the complex, which is scheduled o debut in Spring 2022, include Sky’s Gourmet Tacos, Cinepolis, and Iconix Fitness.

With state and local coronavirus pandemic restrictions gradually lifting, Hollywood Park has also announced a partnership with Live Nation on a multi-year booking agreement for the 6,000-seat performing arts center attached to SoFi Stadium and America Airlines Plaza.  The three-story, 227,000-square-foot venue is already slated to host 11 events between September 2021 and March 2022. 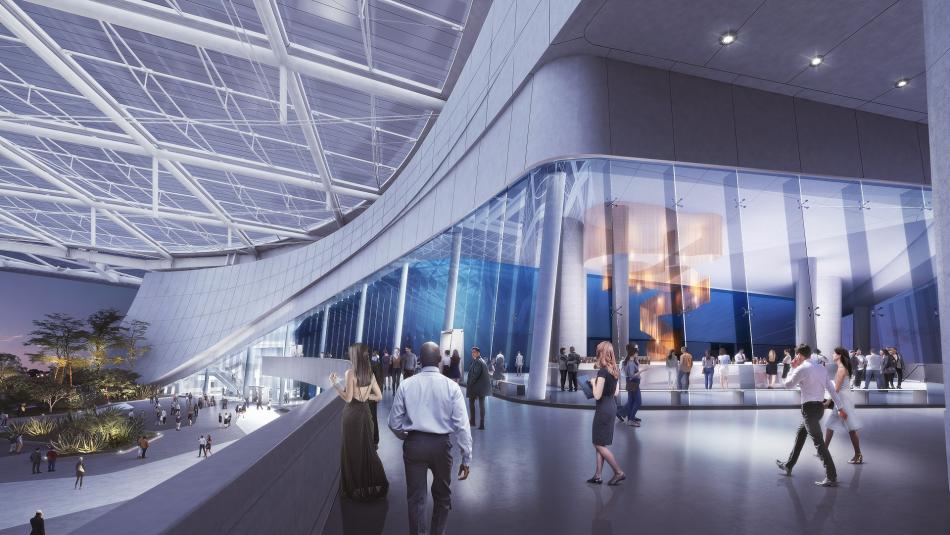 The Hollywood Park development is perhaps the most visible example of a series of public and private investments made in Inglewood since 2012, when Madison Square Garden Co. (MSG) purchased The Forum for $23.5 million and converted historic arena into a concert venue.

Four years later, word came that the NFL would return to Los Angeles after a more than two-decade absence.  The Rams - and later the Chargers - would share the then-unbuilt SoFi Stadium.

Just one year after the NFL's announcement, the Los Angeles Clippers signaled their intent to build a new arena on city-owned properties along Century Boulevard - directly across the street from Hollywood Park.  That $1.2-billion complex is scheduled to break ground later this year, with opening expected in time for the 2024-2025 NBA season. 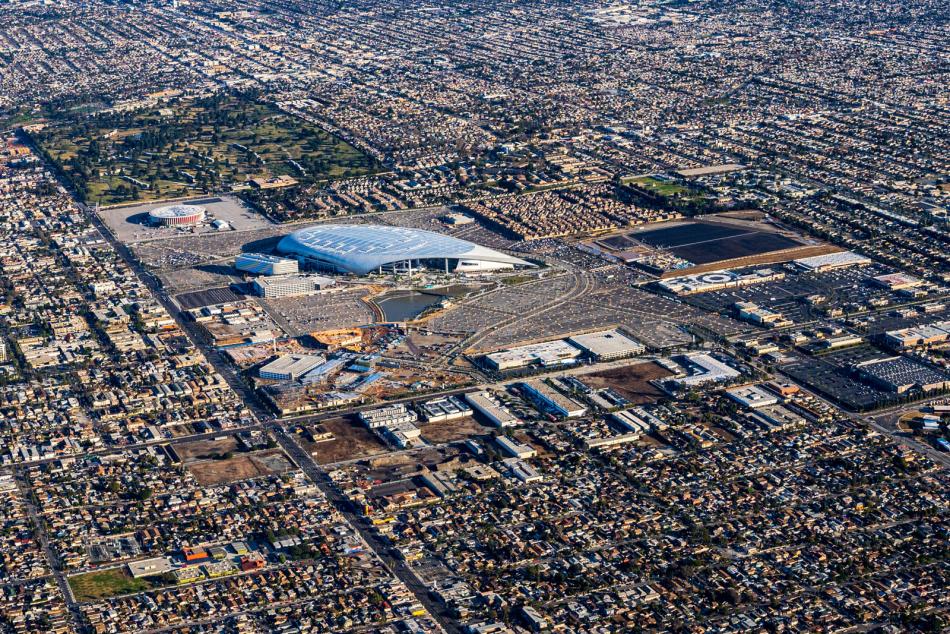 The City of Inglewood, in the hope of connecting the new sporting venues with rail transit, is also pursuing the construction of a 1.8-mile automated people mover system which would run between the Crenshaw/LAX Line and Hollywood Park.

SoFi Stadium, in addition to the neighboring Clippers development, has also sparked concerns of future displacement of longtime residents in Inglewood as a result of new investment attracted by the two sporting venues.  As a response to those concerns, the City of Inglewood adopted a permanent rent control ordinance in 2019.