With a change in the guard for the L.A. City Council approaching rapidly, a proposed office tower in Hollywood has cleared a key hurdle.

In a 12-0 vote, the City Council moved yesterday to approve plans from developers Millennium Partners and Shorenstein Properties to raze the Staples office supply store at 6450 Sunset Boulevard for a new office building. The project, referred to as Sunset + Wilcox for its cross streets, would consist of a 15-story tower featuring roughly 431,000 square feet of offices above 12,386 square feet of ground-floor retail space. Parking for 1,179 vehicles would be located within podium and subterranean garage levels. 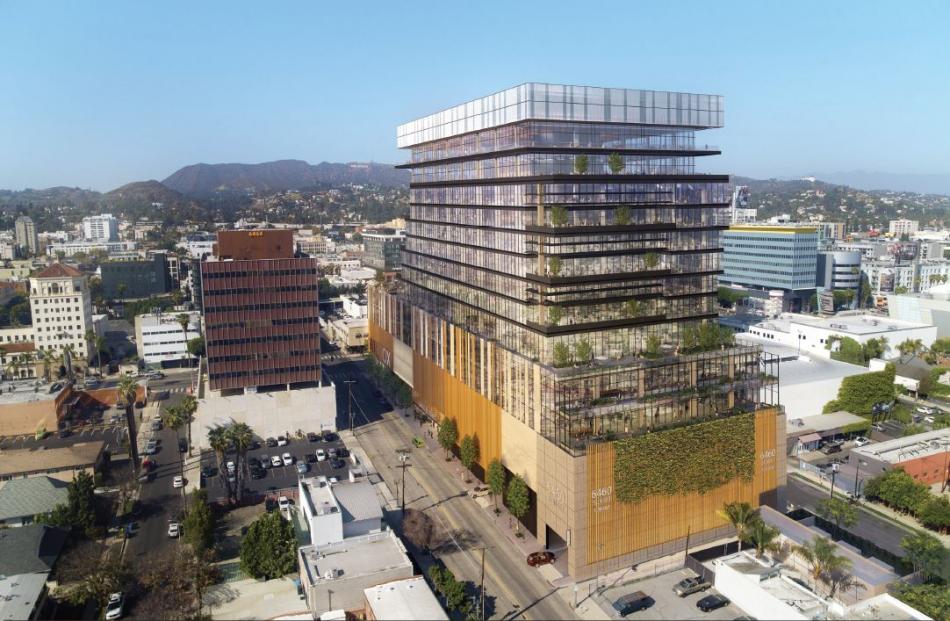 Designed by Gensler, the roughly 275-foot-tall building would include a series of setbacks and terrace levels, creating 22,000 square feet of amenity decks for use by tenants.

According an environmental study circulated by the Planning Department, Sunset + Wilcox is expected to be complete in 2026.

"Our state-of-the-art, environmentally sustainable project is conceived to meet the needs of technology, media, and entertainment industry users in a post-COVID environment designed as a vertical campus with generous outdoor space on every level," said Mario Palumbo Jr. of Millennium Partners in a statement. "The result will not just help satisfy the substantial demand for new creative office space in the Hollywood area, but it will further cement its status as the most desirable place to work in the L.A. area."

The project joins a number of ground-up developments slated for the stretch of Sunset Boulevard between Vine Street and Highland Avenue, including the $1-billion Crossroads Hollywood complex, a proposed Art Deco hotel at Cahuenga Boulevard, and an apartment tower which would rise at the former site of Amoeba Music. Likewise, the Sunset + Wilcox complex follows a string of new office developments in Hollywood, many of which have been built by Hudson Pacific Properties and Kilroy Realty Corporation.

Those projects benefited from the support of outgoing City Councilmember Mitch O'Farrell, who championed the redevelopment of Hollywood since his election in 2013. O'Farrell was defeated in his bid for a third term on the Council by labor organizer Hugo Soto-Martinez.

Millennium Partners, the developer behind Sunset + Wilcox, is also seeking to build a $1-billion skyscraper complex adjacent to the Capitol Records Building and Pantages Theatre.