Since 2016, the grassroots organization Sunset4All has led the charge to bring a complete streets makeover to the busy stretch of Sunset Boulevard which slices through Echo Park, Silver Lake, and East Hollywood. After six years, an elected official is finally looking to take the baton.

In a motion introduced on September 14, 13th District Councilmember Mitch O'Farrell requests a report back from the Department of Transportation, the Bureau of Engineering, the Bureau of Street Services, and the City Administrative Officer on recommendations for implementing the scope of improvements proposed in the Sunset4All plan, including a budget, funding opportunities, and a timeline for delivery.

The proposed concept, according to O'Farrell's motion, would serve an area that is home to more than 100,000 residents, and impact corridors which have been recognized as part of the City's High Injury Network. The overall project area includes the stretch of Sunset between Fountain Avenue and Dodger Stadium, as well as Santa Monica Boulevard between the Vermont/Santa Monica subway station and Sunset Junction. The Sunset4All plan proposes to restripe the existing right-of-way, adding up to:

The motion, which has been referred to the City Council's Transportation Committee for consideration, requests a report back within 60 days.

In another development for active transportation infrastructure in Council District 13, O'Farrell has introduced a motion calling for the installation of protected bike lanes along Riverside Drive to the east of Fletcher Drive through Elysian Park along Stadium Way - a route included in both the City's Bicycle Plan and the Elysian Park Master Plan. Likewise, O'Farrell has requested a report on the cost of installing an ADA-compliant sidewalk along the stretch of Stadium Way in Elysian Park which currently ends at Landa Street. 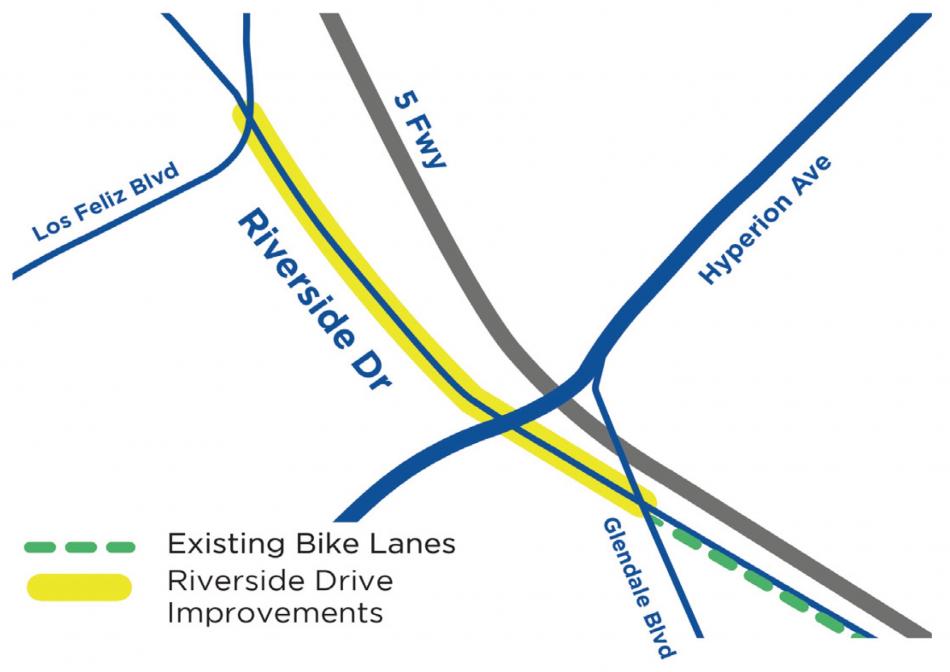 The corridor, writes O'Farrell, provides a key connection between the Elysian Park area and Atwater Village, where a crossing of the L.A. River for pedestrians and cyclists has been built as part of the Glendale/Hyperion bridge complex. His City Council colleague Nithya Raman has already helped to bring protected bike lanes to Riverside Drive between Glendale and Los Feliz Boulevards. However, a gap between the two segments would still exist between Glendale Boulevard and Fletcher Drive.

It remains uncertain whether or not O'Farrell will remain in office to see either project through to fruition. The two-term incumbent was forced into a run-off election against challenger Hugo Soto-Martinez in November after finishing second in the June primary.