More than one year after breaking ground in Boyle Heights, vertical construction is complete for La Veranda, a new supportive housing development from Abode Communities.

Located on two Metro-owned properties at the intersection of Cesar Chavez Avenue and Soto Street, the project consists of two four-story buildings that will feature 77 one-, two-, and three-bedroom apartments at completion. Plans also call for ground-floor commercial space and a parking garage. 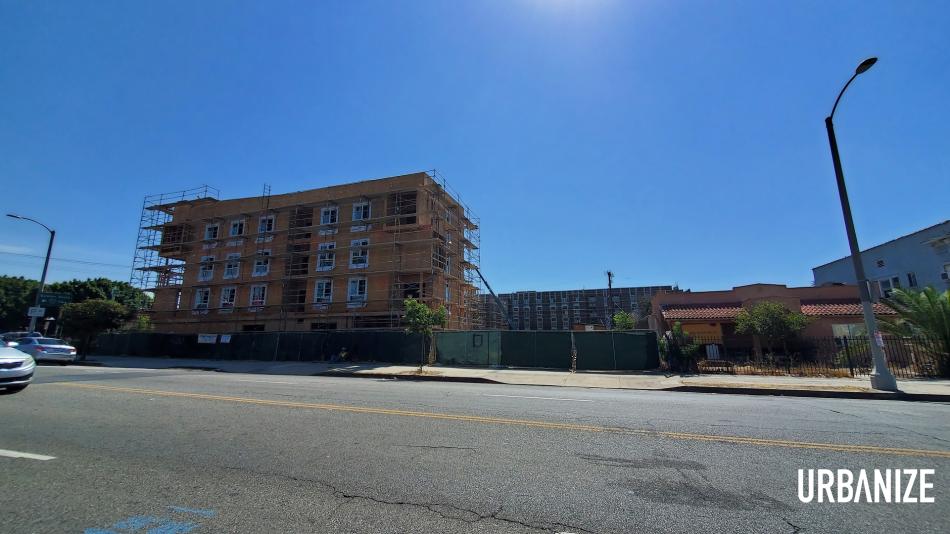 Save for a single manager's unit, the 76 income-restricted apartments at the property will be divided evenly between permanent supportive housing and traditional affordable housing. The property will be restricted to rent by households earning no more than 20 percent of the area median income level, Metro announced last year.

Abode is serving as architect for the apartment complex, with landscape work by AHBE | MIG. The contemporary low-rise structures will be accompanied by common spaces including a children's play area, a jogging path and a garden for residents.

At the time of La Veranda's groundbreaking, it was estimated to cost roughly $63 million. The relatively high cost has been attributed to a combination of factors, including plans for on-site parking, larger unit sizes, and the construction of two separate structures due to an alley bisecting the site.

La Veranda is one of several joint developments associated with properties near the L Line, including new projects planned near the Mariachi Plaza and Soto Stations.  Abode Communities is partnering with Metro on another of those developments - a proposed 60-unit apartment complex with a grocery store and a pocket park one block east at Cesar Chavez and Fickett Street.