An empty lot on Atlantic Avenue once controlled by Long Beach's defunct redevelopment agency could be redeveloped with housing and commercial space, according to an agenda item from the Long Beach Planning Commission.

The proposed project, called "Rhythm," would rise from a full city block bounded by Atlantic, Linden Avenue, South Street, and 59th Street.  Plans call for the construction of 84 three-story townhomes on the 3.2-acre site, in addition to a 567-square-foot community room and approximately 2,300 square feet of street-fronting commercial space.

Irvine-based Brandywine Homes, the developer behind the project at 5801 Atlantic Avenue, has proposed a mix of two-, three-, and four-bedroom dwellings that would range from 1,166 to 1,898 square feet in size.  This would include 13 live/work units facing Atlantic Avenue.

Withee Malcolm is designing the townhomes, which are depicted as contemporary low-rise structures with pitched roofs and stucco exteriors.  The townhomes, which would each include a two-bedroom garage and private patio, would also be accompanied by a common pool.

The retail building, designed separately by Olson Kundig, would be located at the intersection of Atlantic and South.  A rendering depicts and airy two-story structure with space for a cafe, a restaurant, and outdoor dining.

Brandywine's project is the first in North Long Beach to be designed under new mixed-use zoning adopted for the North Long Beach community in 2019.  The proposal calls for full-width sidewalks along Atlantic, as well as bulb outs at intersections, and other traffic-calming features.

Besides Rhythm, Brandywine's other proposed and under construction projects include new townhome developments in Carson and Whittier. 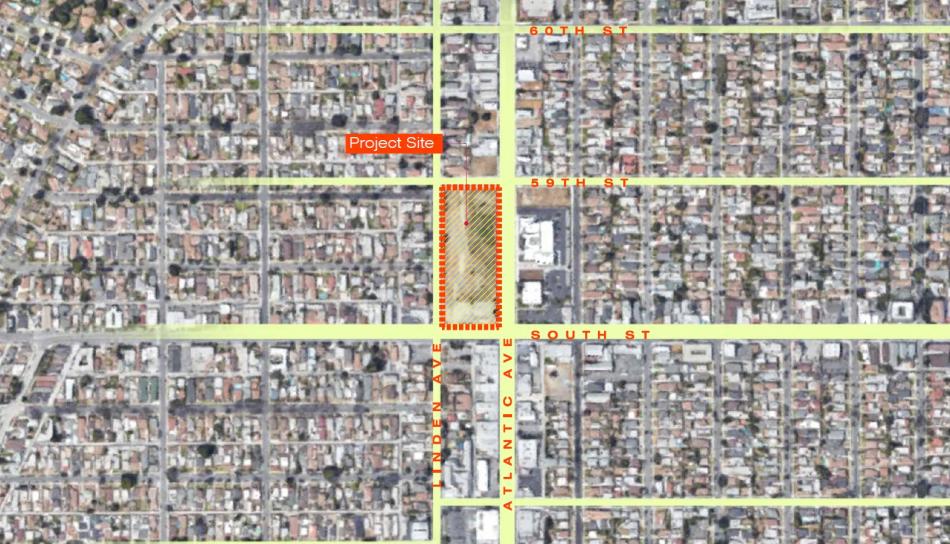