Yesterday, the City of Los Angeles announced the winners of the Low-Rise LA, a design contest a design challenge aimed at identifying new forms of "missing-middle" housing.

The contest, which launched in late 2020, received a total of 380 submissions in four categories: Corners, Fourplex, (Re)Distribution, and Subdivision.  From that field emerged 12 first, second, and third place finishers, which received a combined distribution of $60,000 in prize money.

While the design concepts will not effectuate new building typologies immediately, they are intended to serve as a jumping off point for a larger discussion about an update to the City of Los Angeles' affordable-housing, zoning, and land-use policies.

"More broadly, our hope is that these winning designs, with their focus on community amenity and self-determination, will set the stage for a more productive and less polarized conversation about the future of our low-rise neighborhoods," reads a statement posted to the Low-Rise LA website.

The winners by category are as follows:

"Inspired by the homes designed by Cliff May, often described as the 'father of the California Ranch' and the designer of the mid-century 'California Dream Home,' The California Branch House intends to fulfill a dream that has remained inaccessible to many.... [It] is a framework that embraces the historic stylings of LA low-rise housing while integrating today's best practices for housing design, modular construction, materials, and landscaping.  This specific proposal for a Branch House across two LA lots and with a community center is just one application.  The community space features essential elements like a kitchen and restrooms that would support an organization or businesses with roots and branches that extend into the community - but is otherwise left unprogrammed, to be determined by residents and the local community.  Other configurations of the California Branch-style House could include co-living setups or temporary bridge housing for LA's homeless community."

"The Family Table is a housing project celebrating the motions that bring families together: growing, cooking, and sharing food.  By fostering connections through collaborative living centered around the kitchen, the proposed scheme seeks to capitalize on the rich network of communities that make up Los Angeles...The project is organized around four spacious kitchens, each shared by two to three neighbors.  A large central table in each serves as a gathering space for the adjacent residents.  Consolidating the kitchens draws residents together and reimagines the definition of unit.  This inherently collaborative architecture begets a cooperative ownership structure, where residents have autonomy to make the community their own as it grows with them."

"A unifying theme in the design brief and in the listening sessions was an acknowledgement of the centrality of community and the recognition of Los Angeles as a mosaic of 100 neighborhoods.  A solution to our regional housing problem must address these criteria as being at the level of a global marketplace and street corner of a local neighborhood....As a solution that is fundamentally scalable each small tower can be configured (pre-approved by LADBS) as the smallest and most economical base unit (in lessons learned from Aravena and Elementhal) at initial construction or at a later date can be expanded to include more square footage.  These small buildings help stabilize neighborhoods by allowing long term home owners to add units like a multi-unit ADU and while we recognize this is a 4 unit per site solution we also see this as a solution to multi-generational housing"

"As Los Angeles neighborhoods continue to densify, the future of multifamily housing depends even more on finding the right balance between indoor and outdoor space.  This balance is critical to the health of urban residents and the success of the places they call home.  Planning for density and open space creates an opportunity for a more porous city with spaces that increase access to natural light, landscape, and human-centered places....Hidden Gardens places three individual two-story housing blocks, each interconnected with multiple variations of internal and external spaces that make the whole site feel like a series of gardens.  This porosity creates spaces between the units that act as a buffer to help with privacy and noise reduction while allowing each space to have access to natural daylight and ventilation."

"The Frogtown Four proposes to preserve the existing neighborhood streetscape by providing new strategic backyard interventions to create a new low key low rise model of density.  The foursquare is four individual units under a common roof, built with the same inexpensive wood construction as the neighborhood's existing 100 year old craftsman and mission revival style bungalows.  We propose 4 conjoined vertical bungalows that are partially recessed into the landscape, thus reducing the total height while employing a natural cooling tower.  Indoor/outdoor living landscapes are opportunities for unique front doors at each home and build community to support co-living at the common landscape areas and walkways."

"Tia Rosa has lived in her house, which she owns free and clear, for over forty years and watched her children and their children pass through its rooms and yards.  As a living legacy, Rosa wanted to leverage her equity into opportunities for her loved ones by building additional homes on the property to provide residence, ownership, and wealth building opportunities for herself and her progeny in celebration of her long life of hard work and good fortune."

"At odds with Neutra’s own beliefs, the Von Sternberg house was a monument to individual wealth and success. The Hollywood director had Neutra design a parking garage specifically for his Rolls-Royce and dedicate more space to his own dogs than many people get in their own apartments today.

Such a proposal would be unconscionable when seen in the context of the crises Los Angeles faces today. Growing homelessness and dangerous pollution levels are exacerbated by the effects of climate change, causing wildfires and droughts. Furthermore, the indoor confinement and isolation of the coronavirus crisis has demonstrated the importance of outdoor community spaces.

Taking place in an imagined version of Northridge in which the Von Sternberg house was never demolished but all other development continued unhindered, the proposal involves retrofitting the existing house and grounds to be more community- oriented and an asset to the burgeoning green economy. The four residential units produced by subdivision of the building are all intended to serve a more specific purpose than standard housing, instead acting as transitional housing for the homeless in which jobs are included via the garden."

"One night a sea of stars fell on the city of angels. When the people woke up and gathered, they realized they had to imagine.

It quickly became clear to them, once they overcame their fears, that gravity was suspended and that for the imagination, the world gravitates around values. Some started to talk, even more paid attention and listened. The word problem was spelled o-p-p-o-r-t-u-n-i-t-y and technology was the pen and a tool.

They got closer to the stars and began to name them.

They called them kitchen, a bathroom, a room. One called it a bed and the other table, a handrail or stairs. Some climbed to a garden, a few went to swim in a pool. A child held one in his palm and a little girl put one in her pocket.

A group of them was called a community. They were the bright ones that showed the way and helped the people to navigate; they gave a direction, a structure. These stars became systems for growth." 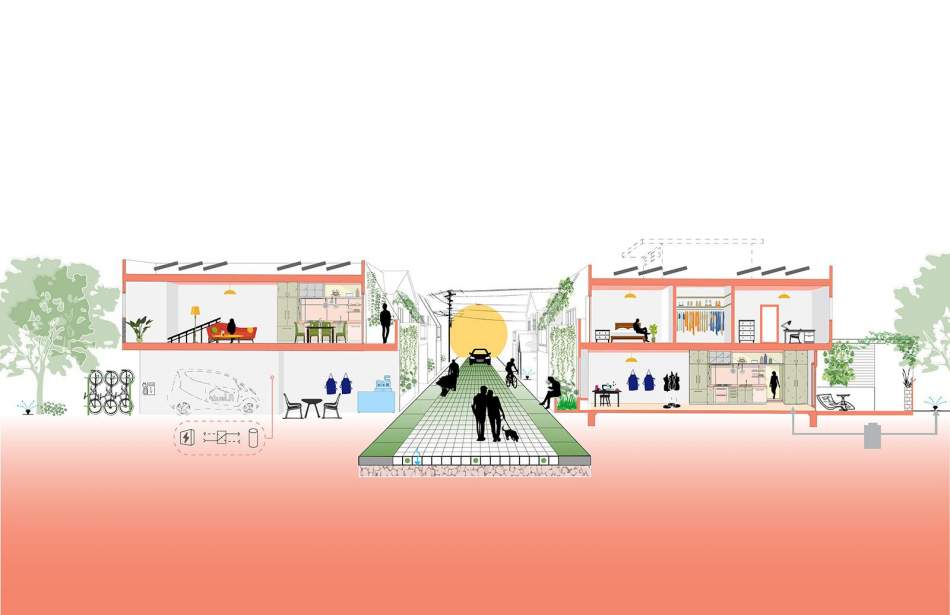 "Our competition entry starts with the low-rise subdivision category and goes bigger.  We chose to focus not only on the duplex infill module as directed by the competition, but also on a network of public spaces that can support the community building possibilities of low-rise housing.  We call it Green Alley Housing.

"Consideration for sensitive densification in Los Angeles as a response to the city's ongoing housing shortage should focus on the organic evolution of neighborhoods toward a more sustainable community. The gentrification that so commonly follows densification has potential to be combated through strategies of retention of existing residents, and more inclusive and affordable models of ownership. Sub/Merge is a model for a versatile framework that seeks to subdivide existing single family residential parcels into smaller lots that afford a greater range of family types with varying income levels the possibility of owning their own home, while retaining the scale and character of the existing neighborhood. This model addresses the fabric of Los Angeles’ single-family residential communities, from Vermont Square to Atwater Village to Van Nuys, while allowing for flexibility that serves the specific needs of each neighborhood."

"The project proposes a future housing model focused on empowering collective stewardship of social and ecological value in the City of Los Angeles.  By integrating architecture and landscape design with a collective management model, 'communal-lot-development' enables interdependency between neighbors and nature.  This is achieved by developing adjacent private lots into a shared residential commons, which provides the advantages of privacy and lot ownership with the social and environmental benefits of communal life."