It may not quite be the subway to the sea that was once promised, but the final leg of the Purple (D) Line extension is finally under construction.

Yesterday, Metro and officials from the Federal Transit Administration held a groundbreaking ceremony for the third and final phase of the project, which will add 2.5 miles of new track between Century City and the Westwood VA Campus. Plans call for the construction of two new stations - a stop at the intersection of Wilshire and Westwood Boulevards and a terminus near the VA Hospital.

Rendering of the Linde Medical Center, a Paul R. Williams-designed building that will become an entrance to Metro's Wilshire/Westwood subway stationMetro

Funding for the project includes a $1.3-billion federal grant, with the remaining cost covered by the countywide sales taxes approved through Measure R in 2008 and Measure M in 2016.

“The Purple Line Expansion is the key that will unlock our transportation future and burst open doors of opportunity on the Westside — and today’s groundbreaking moves us one step closer to completely redefining our city’s relationship with public transit,” said Los Angeles Mayor Garcetti, the current Metro Board Chair, in a news release. “We promised Angelenos a world-class transit system when we passed Measure M, and this milestone is a clear indication of our commitment to make Los Angeles a more accessible, sustainable, and inclusive city.”

With the official start of construction between Century City and Westwood, Metro is actively working on all three sections of the subway extension simultaneously. The first segment between Wilshire/Western Station in Koreatown and Wilshire/La Cienega Station in Beverly Hills is almost 70 percent complete, while the phase two section between Beverly Hills and Century City is nearly 45 percent finished.

The three phases are expected open for passenger service in 2024, 2025 and 2027, respectively. Roughly half of the funding for the full project, which carries a $9.5-billion price tag, is provided by the federal government. 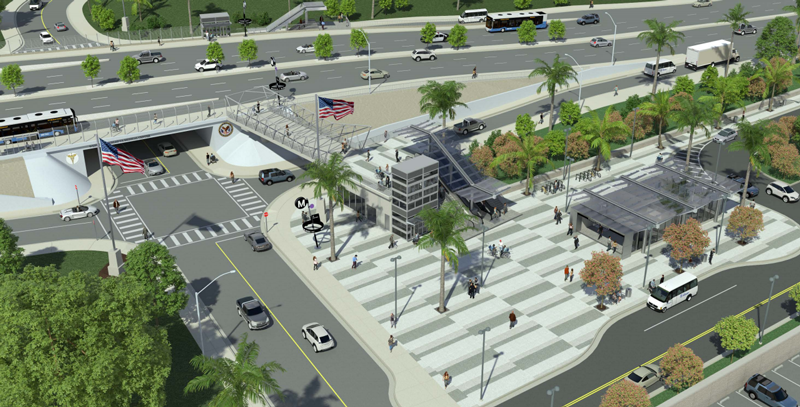 Rendering of the Westwood/VA Hospital StationMetro

The Westside region which the D Line extension will serve ranks as the second largest job center in the Los Angeles area, according to Metro, with more than 300,000 commuters traveling to the area each weekday.  An end-to-end trip is expected to take approximately 30 minutes.

The extension is expected to generate approximately 49,300 daily riders on its own, and add nearly 78,000 new daily trips on the full Metro rail system. Those figures could balloon upon the debut of complementary projects - the planned Sepulveda corridor rail line and an extension of the Crenshaw/LAX Line - both of which would include transfers to the D Line.