The Metro Board of Directors could soon settle on Union Station as the site of the future Downtown terminus of the West Santa Ana Branch (WSAB).

In a presentation scheduled for the January 19 meeting of the Board's Planning Committee, Metro staff have recommended that Union Station should be selected as the eventual northern terminus of the WSAB. The agency had also been considering a second option which would have seen the alignment veer slightly west toward a final stop at 7th Street/Metro Center.

While Metro's ridership forecasts indicated that the 7th Street alternative would see more robust ridership, attracting an estimated 82,000 weekday passengers versus the 61,000 expected for the Union Station alignment, political headwinds have not been in its favor. Metro Board member Janice Hahn has been a vocal proponent of the Union Station alignment, as have officials with cities in Southeast Los Angeles County and the Eco Rapid Transit joint powers authority.

Questions of how to pay for the project have also weighed against a route tunneling deep into Downtown core. While Metro has allocated $4 billion in sales tax returns to the WSAB, the estimated price tag for the two alignments - upwards of $8.8 billion for Union Station and $9.5 billion for 7th Street/Metro Center - represents a large funding gap which the agency would need to cover through other sources such as a public-private partnership or federal grants. 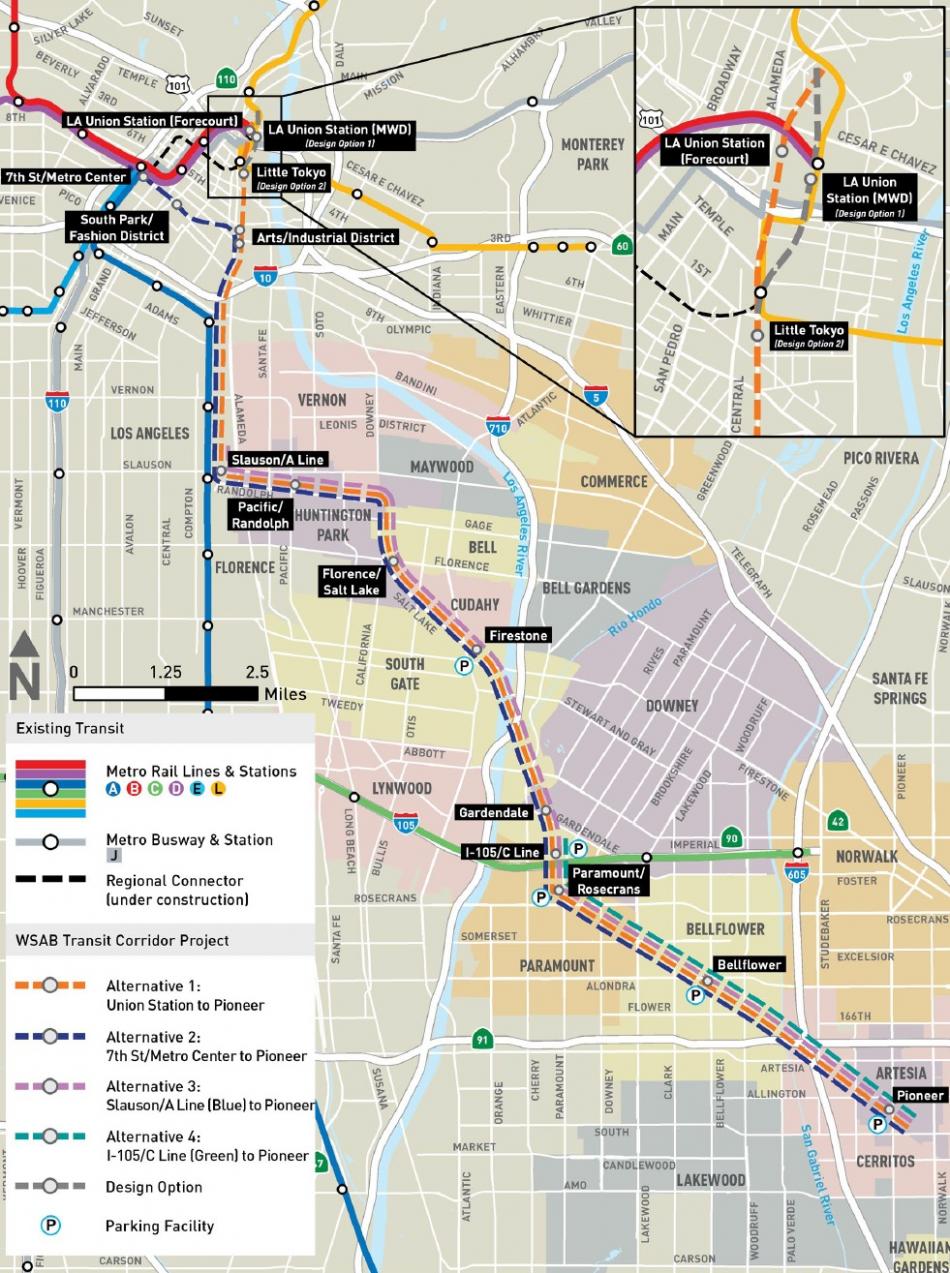 The staff report also offers one strategy which attempts to address the issue of financing. In addition to a northern terminus, staff have also recommended an initial 14.8-mile segment between Slauson Avenue and Pioneer Boulevard to be built as a first phase of the project, connecting Florence-Firestone, Huntington Park, Cudahy, Bell, South Gate, Downey, Cerritos, Bellflower (the proposed site of a $458-million maintenance and storage facility), and Artesia. Under current plans, the first phase of WSAB would be able to commence construction as early as 2023, with completion expected between 2033 and 2035.

As the northern alignment, with extensive tunneling and above-grade sections, would account for nearly half of the WSAB's total cost, a phased approach would lower the total budget and allow Metro to better compete for federal and state funding. Completion of that segment is currently expected in 2053.

Concerns over that lengthy timeline has prompted a new motion introduced by five Board members - including Hahn, Supervisor Hilda Solis, Supervisor Holly Mitchell, Los Angeles Mayor Eric Garcetti, and Whittier Councilman Fernando Dutra - which calls upon the agency to declare that the WSAB will not be considered a finished project until the full 19-mile corridor is completed.  In pursuit of that goal, the motion calls for Metro staff to explore value capture and public-private financing strategies, as well as potential cost-saving measures, to accelerate completion of the northern segment.

Additionally, the motion calls for Metro to implement a new bus rapid transit line along the northern alignment between Slauson and Union Station and to pursue at least $330 million in funding to address the troublesome Washington/Flower junction used by the E and A Lines in Downtown.

The Board members have also once again broached the idea of a WSAB stop in Little Tokyo, connecting with the future 1st/Central Station. The issue of further construction impacts in Little Tokyo, following seven years of work on the Regional Connector, had been a political hurdle weighing against a Union Station alignment for the project.