At its meeting today, the Los Angeles City Planning Commission voted to uphold the approval of a proposed mixed-use development near the intersection of York Boulevard and Figueroa Street in Highland Park, rejecting an appeal brought by a group of neighboring residents seeking to halt the project. 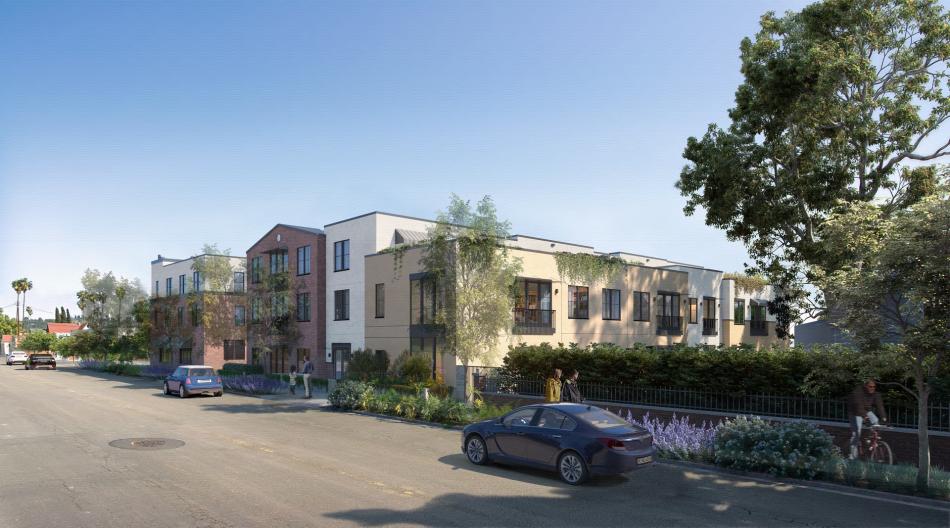 The proposed development, planned by Valley-based real estate firm Skya Ventures, calls for razing an asphalt parking lot at the southwest corner of Avenue 64 and Garvanza Avenue to clear the way for the construction of a new three-story building containing 33 studio, four-, and five-bedroom apartments above 1,910 square feet of ground-floor retail space and a two-level, 76-car basement garage.

Skya's entitlements rely on Transit Oriented Communities incentives to permit a larger structure than allowed under zoning rules for the property. In exchange, three of the proposed apartments are to be reserved as deed-restricted affordable housing.

Green City Building Co. is designing the project, which is planned with a brick exterior similar to nearby historic structures. The building would have a U-shaped footprint above the ground level, wrapping a central courtyard, as well as amenities such as a movie room, co-working space, and a lounge.

Approvals for the project, named for its address at 141 N. Avenue 64, were issued by the Planning Department in September 2021. Within a month, an appeal of the project's entitlements were submitted by a group of neighboring residents. The appellants contend that the decision to approve the Transit Oriented Communities incentives violates local land use regulations, and argue that the "co-living" style accommodations of the apartment complex make the project a 151-unit apartment complex, rather than a 33-unit building.

Objections to the project also center on its design, as well as its relation to the guidelines of the Highland Park-Garvanza Historic Preservation Overlay Zone (HPOZ). While the HPOZ Board recommended denial of the project following a February 2021 meeting, their role is considered advisory, and Planning Director elected to approve the project as planned.

Skya Ventures, the developer, is also building a 92-unit apartment complex near the intersection of Vermont and Fountain Avenues in East Hollywood.