A recent post to The Source offers an update on Metro's ongoing Traffic Reduction Study (née Congestion Pricing Pilot Program), including newly refined alternatives and potential benchmarks for the success.

While the ultimate goal of the study is to reduce congestion by tolling automobile traffic, Metro will also measure progress through investments in new transportation options for communities affected by the pilot program, as well as the availability of assistance to low-income residents who may be impacted by congestion pricing.

As of early 2021, four traffic choke points were being considered as candidates for a pilot program: the Santa Monica Mountains, the US-101 and I-5 corridors, Downtown Los Angeles, and the I-10 to the west of Downtown. Out those four original alternatives, Metro has found that pilot programs in the Santa Monica Mountains and the Downtown area have emerged as the strongest performers. 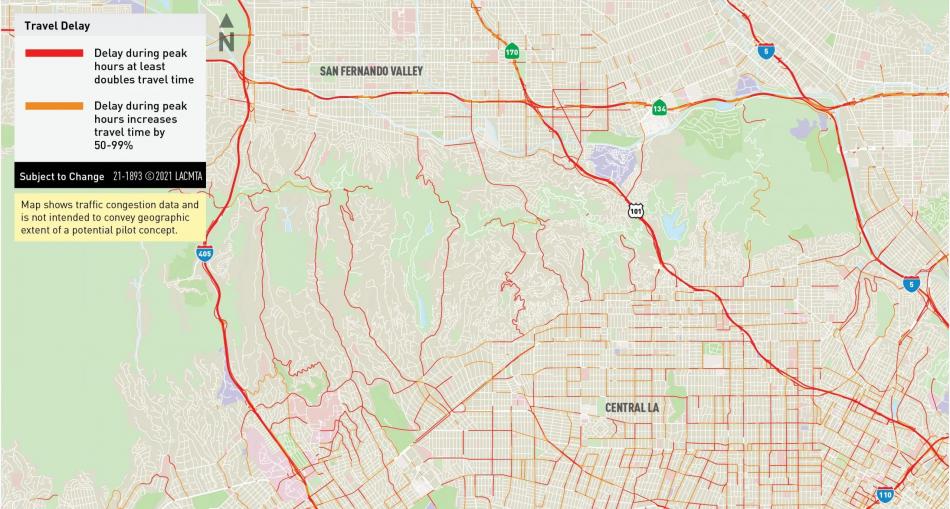 Metro has found that introducing tolls on the 405, 101, and 5 freeways as they cross through the Santa Monica Mountains would nearly double speeds in the Sepulveda Pass during the afternoon, potentially shaving 14 minutes off the trip between LAX and destinations in the San Fernando Valley. Speeds on the 101 and the 5 also saw improvements.

On the other hand, the introduction of congestion pricing would also result in spillover traffic on other passages through the mountains, resulting in slight increases in travel times on roads to the east of the 5.

Metro estimates that a pilot program for the Santa Monica Mountains would cost just over $32 million to implement, but generate up to $1.67 million on an average weekday, providing funding to address spillover traffic and invest in new bus service and low-income assistance programs. 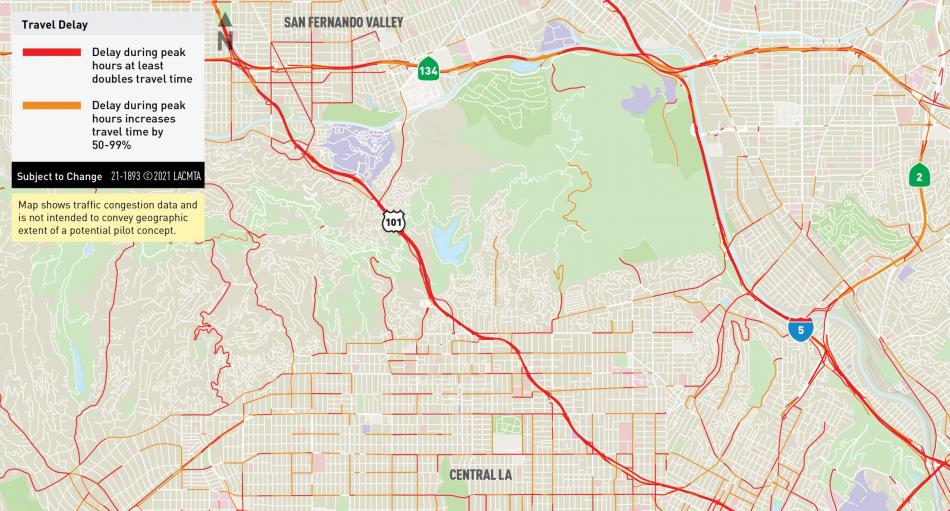 The US-101 and I-5 concept is a slimmed down version of the larger Santa Monica Mountains alternative, limiting congestion pricing to the 101 and the 5. Metro found that while the concept would reduce in improvements to speed and travel along the freeways, it would also result in spillover traffic on surrounding roadways, and ultimately increase the total amount of driving on a typical weekday by 20,000 miles, with drivers taking more circuitous routes to avoid the tolls.

The total cost of the 101 and 5 concept is estimated at $18.5 million, with anticipated weekday revenues of $507,000. Metro frames this as one of the weaker performing concepts. 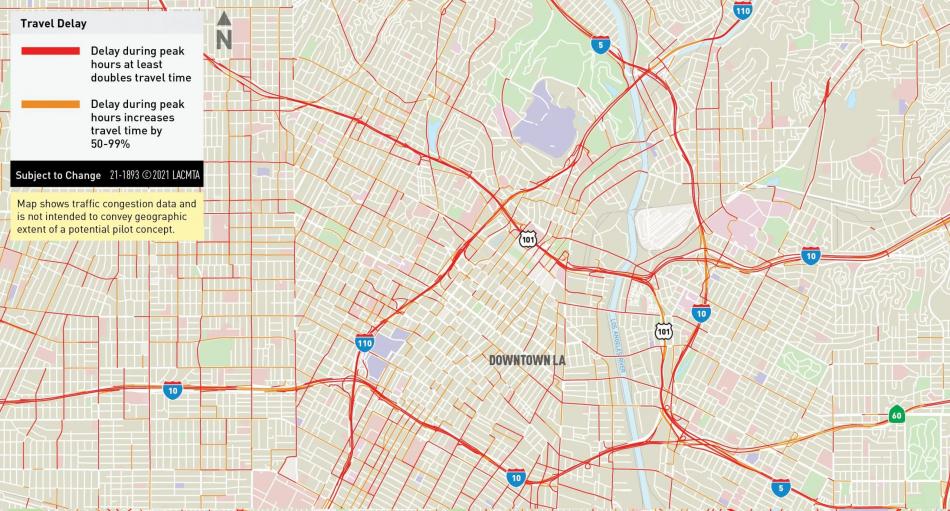 Introducing congestion pricing on the freeways which wrap the Downtown corridor would result in increases in speed between 6 and 10 miles per hour, making for modest improvements in travel times. However, surface streets in the Downtown area would become slower as a result of spillover traffic.

The total cost of the Downtown Freeway concept is estimated at $46.2 million, and it could generate upwards of $918,000 per day. 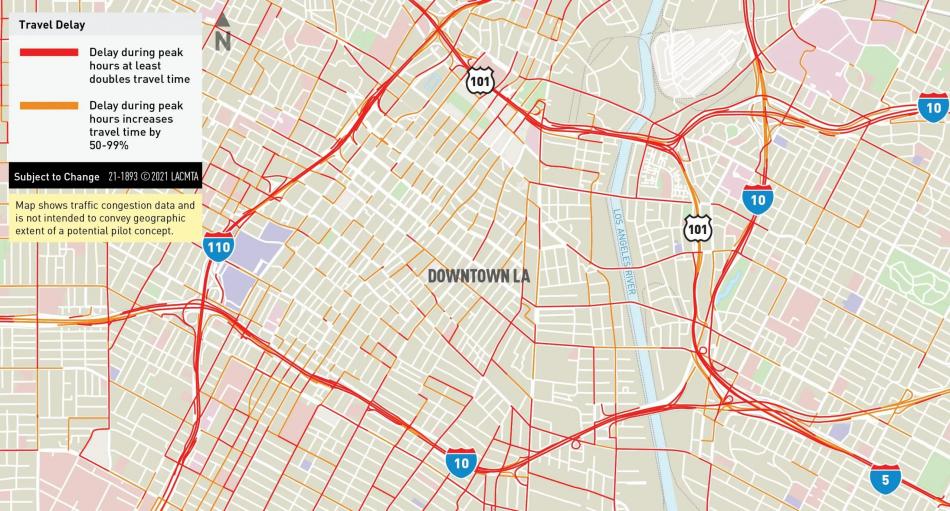 The other Downtown concept, a "cordon" model, would institute congestion pricing on the neighborhood's surface streets.

With an estimate $58.7-million price tag, it is the most expensive option - but also the most lucrative, potentially generating up to $2.55 million on an average weekday.

Due to its location at the center of Los Angeles County, traffic in Downtown's road network has spillover impacts across the region. As such, Metro found that a Downtown cordon would even improve travel for trips between other neighborhoods.

Likewise, notoriously slow-moving buses would run more reliably with reduced traffic on city streets, and air pollution would show a marked improvement around the Downtown area.

I-10 West of Downtown 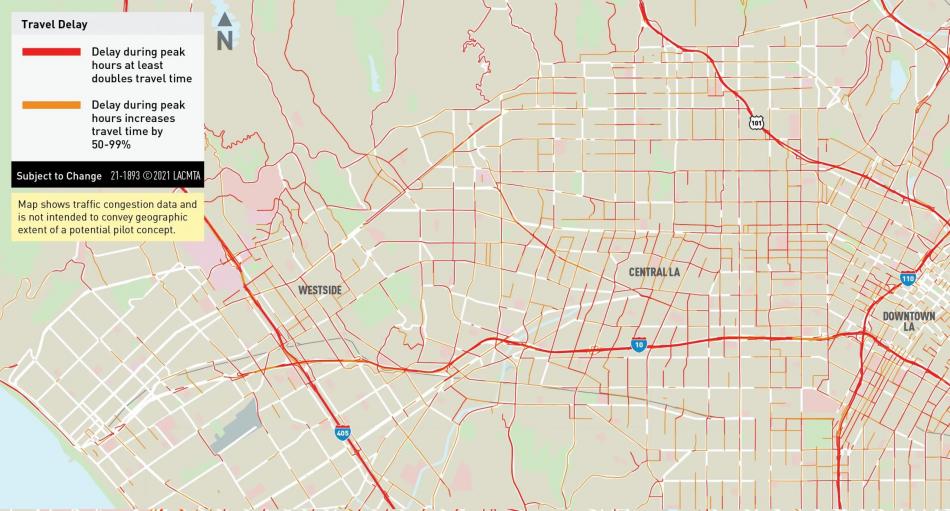 I-10 West of Downtown LAMetro

The final concept, which calls for tolling the 10 freeway between the 110 and Santa Monica, would improve traffic, speed, and travel times along the freeway - but result in spillover effects for the surrounding area.

Metro found that despite the relatively high cost of $39.5 million, the 10 freeway alternative would generate just $280,000 on an average weekday - the lowest of any of the concepts under consideration.

Metro cautions that the Traffic Reduction Study is an ongoing project, and outreach is expected to continue over the coming year. Staff now expects to ask the Metro Board approve a pilot program in Spring 2023, leading to a launch date in 2026 - a one year delay relative to the anticipated schedule announced in February 2021.