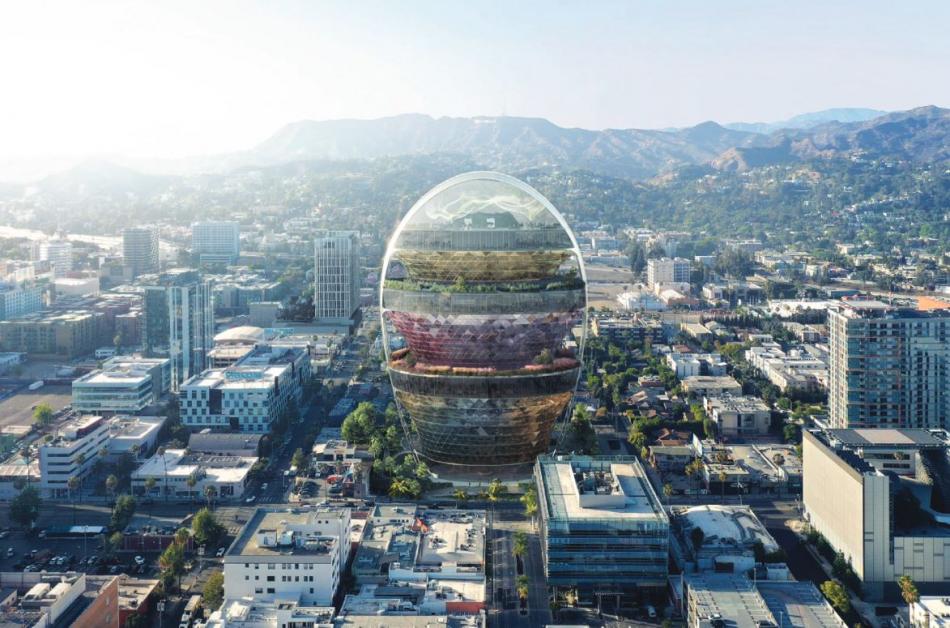 The project, slated for a roughly two-acre site located at 6061–6087 Sunset Boulevard and 6056–6090 Harold Way, calls for the construction of a 22-story building featuring approximately 490,000 square feet of offices, as well as 20,000 square feet of restaurant space, and a 14,000-square-foot screening room. Parking for 1,287 vehicles is planned within six subterranean levels and a three-level, enclosed podium.

Rising approximately 420 feet in height, the tower the tower would culminate in a curving rooftop dome, encasing a sky garden and restaurant space, as well as a two terrace gardens at the 10th and 17th floors. Those spaces would be accessed via a funicular railway embedded into the side of the building. Additional green space would line the base of the tower, capping its podium deck.

"Inspired by the curvilinear forms of the Griffith Observatory, Capitol Records Building, Hollywood Bowl, and the Cinerama Dome, [The Star] asserts a new typology for the office of the future," said MAD Architects founder Ma Yansong in a September 2021 news release.

View from outdoor terrace at The StarMAD Architects

Pending approvals by Los Angeles city officials, including a general plan amendment and a zone change, the environmental study states that construction of The Star is expected to commence in 2024 and conclude by 2027.

The project has been billed as the largest new office building in Hollywood, which has experienced a resurgence in recent years as companies such as Paramount Global and Netflix have leased large spaces nearby. Other investors have also looked to capture that demand, including Hudson Pacific Properties, which has received approvals to add more than 460,000 square feet of offices to the Sunset Gower Studios complex across the street.