An initial study published by the City of Los Angeles Bureau of Engineering details plans to close a gap on the L.A. River bike path in the San Fernando Valley.

The project, officially known as the Los Angeles River Bikeway and Greenway Project-Vanalden Avenue to Balboa Boulevard, would span a roughly 2.9-mile corridor between the Sepulveda Basin Recreation Area in the east and the Reseda community in the west, connecting the existing Balboa Boulevard bike path to the L.A. River bike path at Vanalden Avenue.  In addition to adding a new multi-use trail flanking the concrete-encased waterway, plans also call for the addition of new parks, roundabouts, and bike lanes, crosswalks, and other infrastructure to surrounding neighborhoods.

Per the initial study, the new bike trail would be mostly segregated from cross-traffic, with new undercrossings proposed at Wilbur Avenue, Reseda Boulevard, Victory Boulevard, Lindley Avenue, White Oak Avenue, and the G Line busway's right-of-way.  The notable exception is at White Oak Avenue, where the path would switch from the north bank of the river to the south bank, with cyclists making the change via a proposed protected bike lane between Victory Boulevard in the north and the G Line right-of-way to the south. 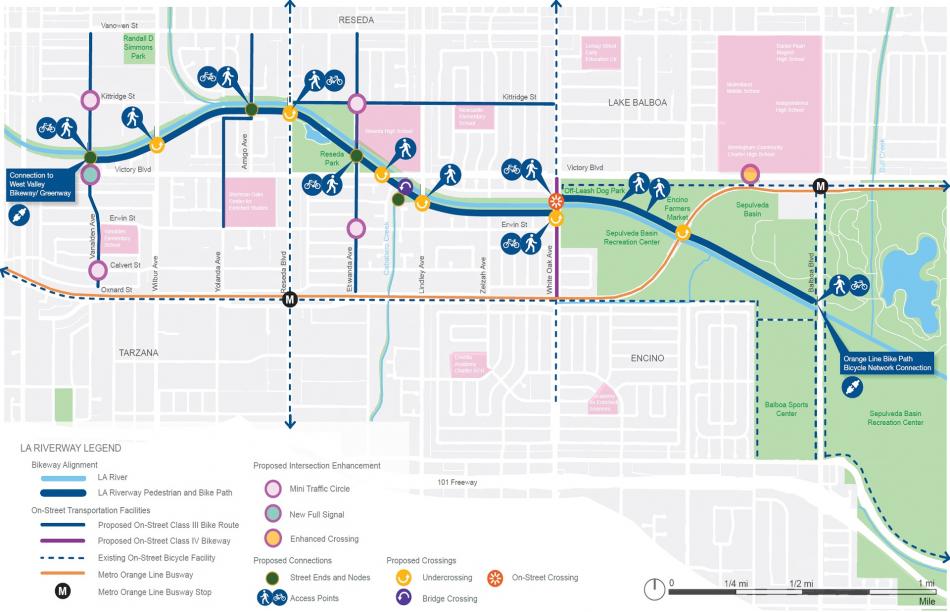 Map of the Balboa-Vanalden segment of the L.A. River bike pathGruen Associates

Additionally, plans call for new crosswalks, traffic circles, and the addition of Class I bike lanes at the following locations:

The project would also involve the addition of new landscaping along the length of the corridor, highlighted by three "river end street parks" at Vanalden, Amigo, and Etiwanda Avenues, which would allow access to the bike trail off of north-south street segments that dead-end at the river channel.

Construction of the new bike trail is expected to commence in Fall 2022 and continue over a roughly three-year period.