Your eyes do not deceive you: after six years, construction is set to come to a close next month for the new Sixth Street Viaduct. 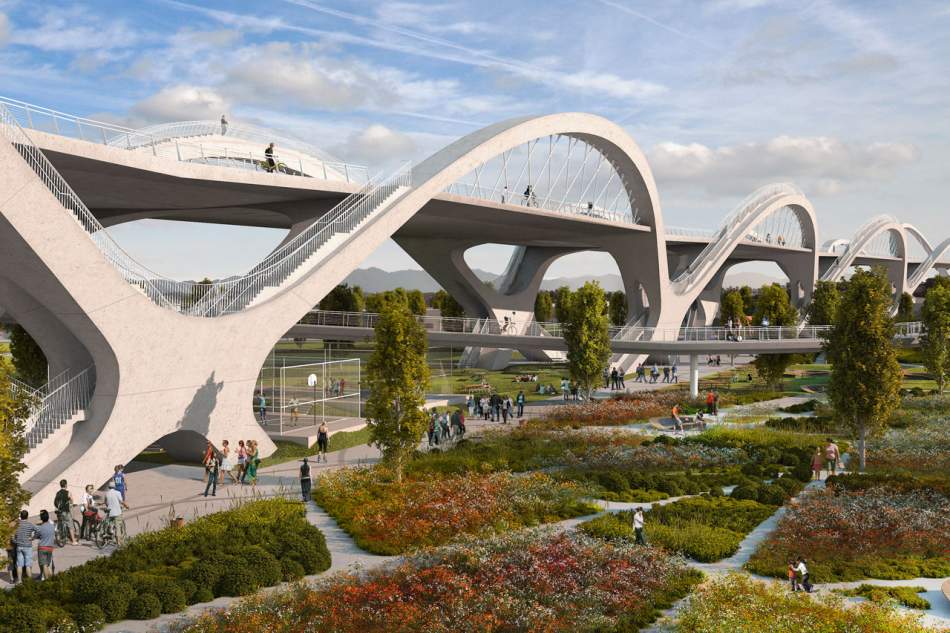 Rendered view of the arches, as well as proposed park spaceMichael Maltzan Architecture

The $588-million structure, which spans 3,500 feet across the L.A. River between Boyle Heights and the Arts District in Downtown Los Angeles, will open to the public in a two-day celebration on Saturday, July 9 and Sunday, July 10, 14th District Councilmember Kevin de Leon announced this week.

“After more than six years of being closed, we are thrilled to reopen the newly built Sixth Street Viaduct and usher in a new era for Los Angeles,” said Councilmember de León in a news release. “Once again, this bridge will take its place as one of Los Angeles’ most iconic landmarks connecting the Arts District and Boyle Heights. This celebration will be a tribute to the years of dedicated work that went into creating one of the most inspiring public works projects in our City’s history.”

As avid readers are likely aware, the new bridge replaces a 1932 viaduct of the same name which was demolished in 2016 due to the likelihood that it would collapse during a major earthquake. The original, which was one of a half-dozen similar L.A. River crossings built in the Downtown area during the 1920s and 1930s, was plagued by an alkali-silica reaction – colloquially known as “concrete cancer.” 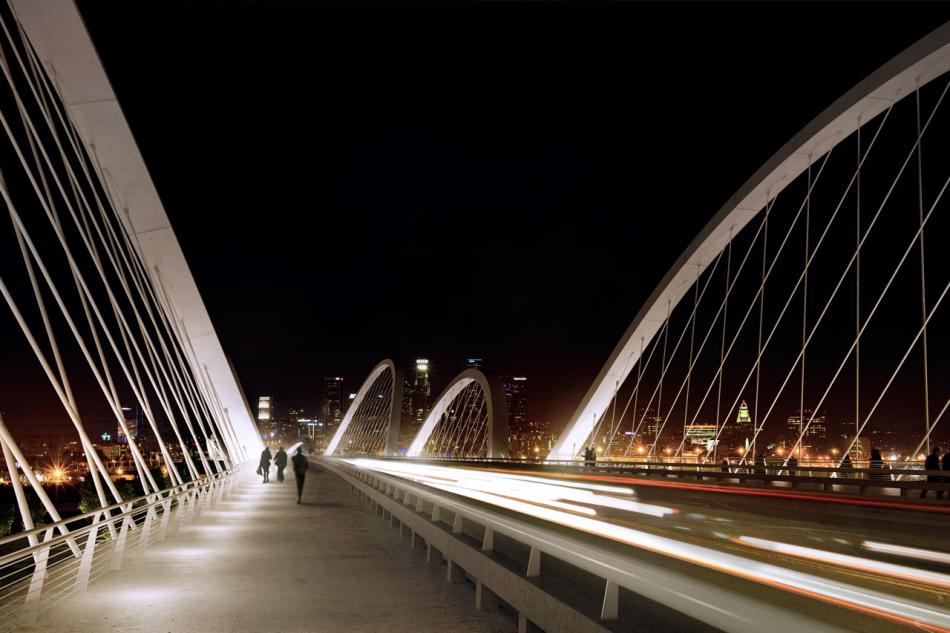 The replacement, designed by a team which includes HNTB and architect Michael Maltzan, was branded as the "Ribbon of Light," during a design contest administered by the Bureau of Engineering. The ten sets of LED-lit arches which line the structure serve both functional and aesthetic purposes, while also referencing the iconic metal arches of the original bridge.

Besides restoring an important artery for traffic crossing east-to-west between Downtown and Boyle Heights, the project also adds many features not seen in the original. Wide sidewalks ranging between 8 and 14 feet in width are accompanied by protected bike lanes on both sides of the viaduct. Additionally, access to the ground below the bridge is provided by five staircases and ramps on both sides of the river.

Those pedestrian and bicycle access points will also link to another related project: 12 acres of new park space below the viaduct. The Bureau of Engineering expects to break ground on that $40 million project in 2023. Likewise, Metro is currently studying an extension of subway service into the Arts District from Union Station, with a new terminus planned along the banks of the L.A. River near the viaduct. The Los Angeles City Council's Transportation Committee voted last year to fund the project using Measure M returns.

“This viaduct has been a labor of love and determination for so many of us in the City, our partners and particularly the Bureau of Engineering,” said City Engineer Gary Lee Moore in a statement. “We worked closely with the community to create a multi-modal space that not only creates a new bridge for vehicles, but also brings exciting new walking and biking options with breathtaking views. Our team is very proud to deliver this iconic landmark to Los Angeles for everyone’s enjoyment for generations to come.”

The community event scheduled for July 9 will run from 2 pm to 9 pm on the east side of the viaduct near Boyle Avenue and Whittier Boulevard. Plans call for food, entertainment, and musical performances headlined by Ozomatli.

Tickets are required, and can be reserved at: https://www.eventbrite.com/e/grand-opening-of-the-sixth-street-viaduct-tickets-360641
286797

More information is available at: https://www.sixthstreetviaduct.org/grand_opening_2