Just south of the intersection of 7th Street and Santa Fe Avenue in Downtown Los Angeles, the wrapping is off at a new Arts District office complex from Lowe. 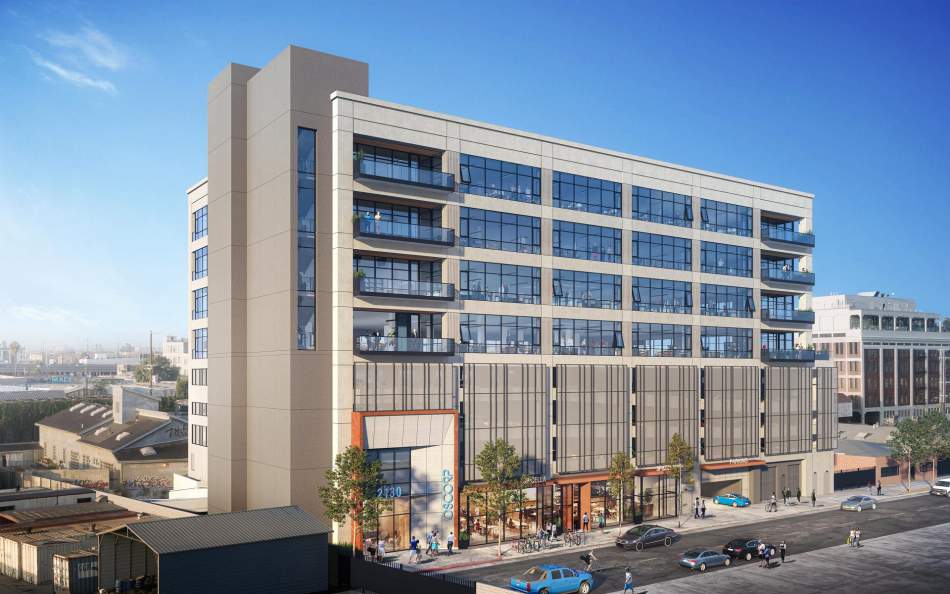 Located at the former site of a junkyard at 2130 E. Violet Street, the project consists of a nine-story structure featuring 113,000 square feet of offices and ground-floor commercial space

Ware Malcomb designed the building, which stands roughly 108 feet above its industrial surroundings along the west bank of the L.A. River, and is clearly visible from the nearby 7th Street Bridge. Upper floors of the building include 27,000-square-foot floors with a five-story parking and retail podium located below. The exterior of the mid-rise structure is mostly concrete, with steel details and a podium which is to be disguised with a green wall. Insets and setbacks create terraces for future tenants, who will also have access to a 3,000-square-foot rooftop deck.

The project, which broke ground in July 2020 at 2130 E. Violet Street, is being advertised for lease with immediate availability.

While 2130 Violet may stand head and shoulders above neighboring structures near the intersection of 7th and Santa Fe, it may be a sign of things to come in the Arts District, as new companies follow name-brand tenants such as Spotify and Warner Music Group to the neighborhood.

Directly across Violet Street, Onni Group is planning a larger mixed-use project which would also include a significant block of office space.  One block south at Bay Street, developers Jade Enterprises and Tishman Speyer are planning two developments which would include offices, in addition to street-fronting commercial uses.

Potentially the largest project is all is slated for a site located one block east on Santa Fe Avenue, where Warner Music Group's former parent company has teamed up with Hines on plans for a more than 450,000-square-foot office building.