In a series of votes taken earlier today, the Los Angeles City Planning Commission signed off on new developments which would bring new multifamily housing to the Del Rey, Westwood, East Hollywood, and Koreatown neighborhoods.  The four projects, three of which faced appeals, would create a combined total of 244 residential units, as well as amenities, retail, and associated parking. 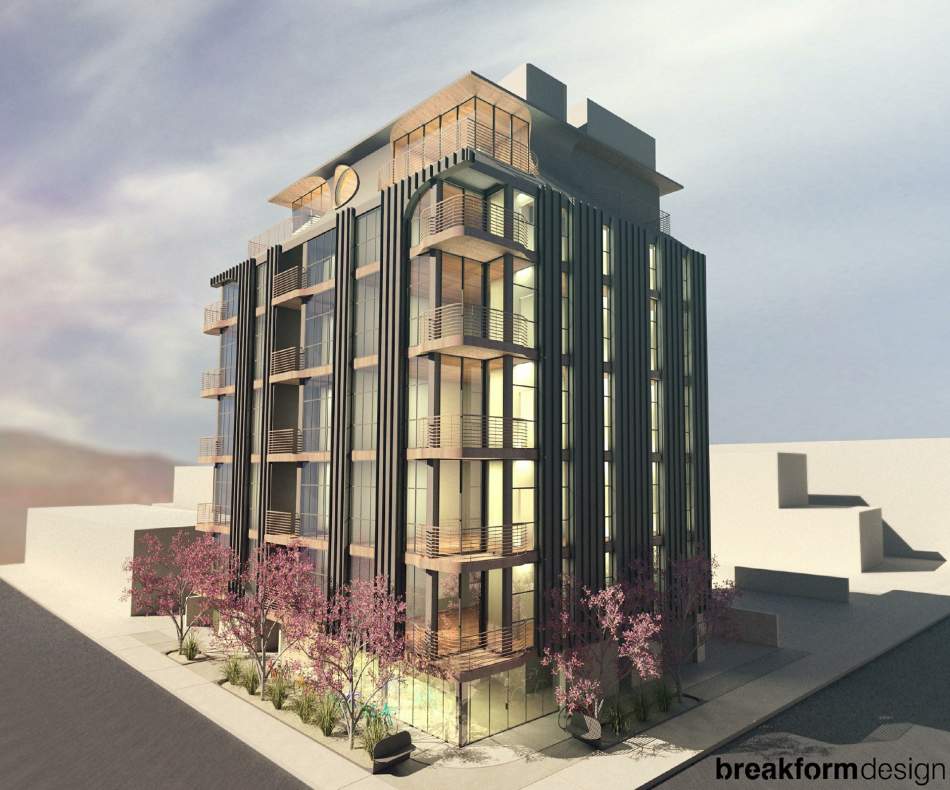 In Del Rey, the Commission voted unanimously to approve a conditional use permit and density bonus incentives necessary for the construction of a new condominium complex at 13481-13485 West Beach Avenue.

The project, which was submitted to the City of Los Angeles last year for review, would replace a triplex and a single-family home with a new seven-story building featuring 27 studio and one-bedroom dwellings above basement parking for 14 vehicles.  Applicant Stan Lee Enterprises, Inc. would be required to set aside seven of the units for very low-income households, under the terms of approval for the density bonus.

Breakform Design is the architect behind the Beach Avenue project, which a rendering depicts as a contemporary low-rise building capped by a rooftop amenity deck. 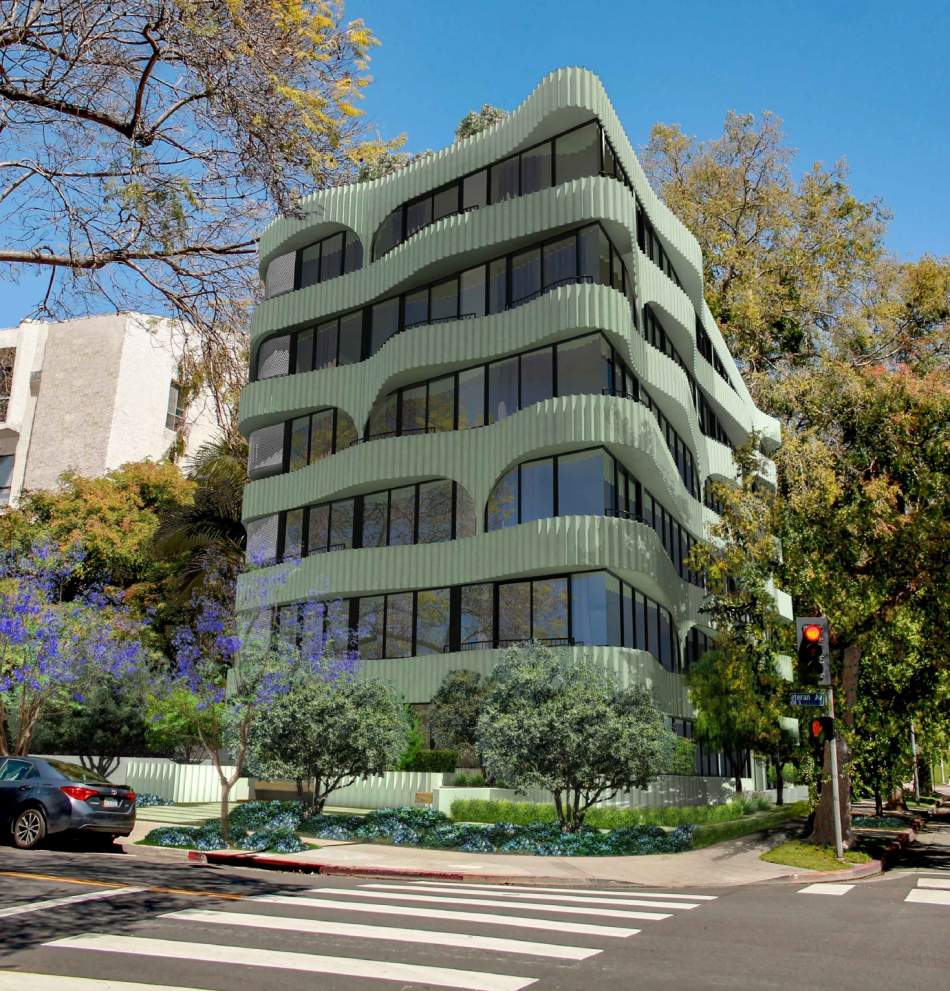 A few miles north in Westwood, the Commission rejected an appeal from a neighboring condo owner which sought to block the construction of an apartment complex at the intersection of Veteran and Ohio Avenues.

Development applicant Brennen Hakimiam has secured approvals from the city to raze a two-story apartment building from the 1940s, making way for the construction of a larger six-story edifice featuring 18 apartments studio, one-, two-, three-, four-, and five-bedroom dwellings over 16 parking stalls on two basement levels.

Warren Techentin Architecture is designing the proposed podium-type building, which would be composed of five floors of wood-frame construction atop a concrete base.

The appellant, Vojin Hadzi-Pavlovic, had argued that the project would negatively impact his ongoing cancer treatment, as well as the value of his home.  In a presentation to the Commission, he argued that the Planning Department had been charged to serve the interests of the developer, and proposed that Hakimiam could provide him with a new residence at an alternate location to resolve the appeal.

Although the project was approved by the Commission, it also faced pushback from a representative of City Councilman Paul Koretz's office, who did not express outright opposition, but described the co-living complex as a "pioneering" form of development that is ill-defined in the Los Angeles Municipal Code. 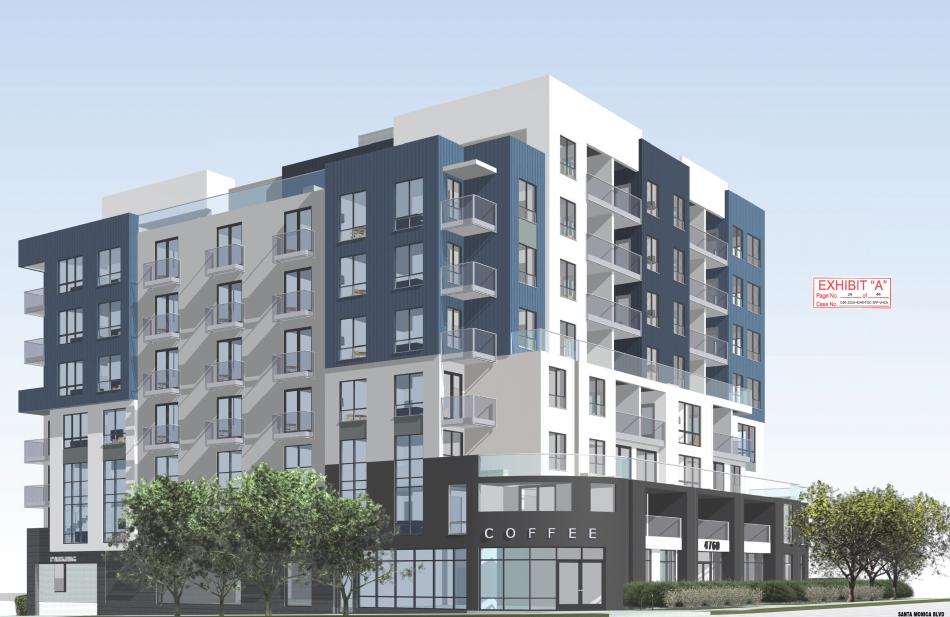 The third housing project considered by the Commission, slated for a property at 4750 Santa Monica Boulevard in East Hollywood, is proposed by local real estate firm Canfield Development.

The West Los Angeles-based firm recently secured approvals for a plan which calls for razing a single-family home and a commercial building near the Vermont/Santa Monica subway station to make way for an eight-story edifice containing 85 studio, one-, two- and four-bedroom apartments above 1,137 square feet of ground-floor retail space and 72 basement parking stalls.  Canfield would set aside 10 of the apartments as affordable housing at extremely low-income level in exchange for development incentives through the Transit Oriented Communities program.

The podium-type complex, which is being designed by Hochhauser Blatter would be clad in metal panels and painted cement plaster.  Plans also call for a central courtyard and a rooftop terrace.

The appeal of Canfield's project was filed by an organization that names itself Citizens for Reasonable Development, raised a slew of objections to the project, arguing that it violated local zoning rules and should be subject to an environmental impact report.  Additionally, the appellant contends that the Transit Oriented Communities program itself violates the mandate granted by voters through Measure JJJ in 2016.

Commissioners dismissed the appeal, affirming the recommendations of the project's staff report. 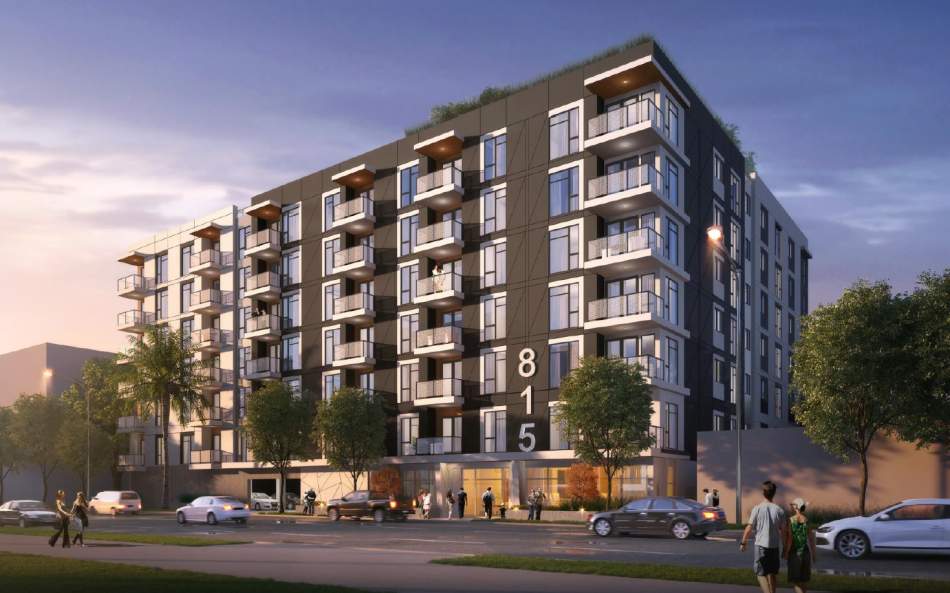 The final project, located in Koreatown, would rise from a property at 815-831 S. Kingsley Drive.

The podium-type building, designed by DFH Architects, is depicted in a rendering as a boxy low-rise structure clad in gray stucco and orange and white metal panels.  Proposed on-site amenities include rooftop amenity deck, a podium-level courtyard, and several interior common rooms.

The project appellant, the Coalition for an Equitable Westlake MacArthur Park, is a frequent opponent of new housing developments in Central Los Angeles.  While the organization withdrew its opposition two weeks prior to the hearing, the withdrawal came too late for the item to be removed from the Commission's agenda.  Nonetheless, the appeal - which argued that the apartment complex should be subject to further environmental review - was rejected by both staff and the Planning Commission, citing a lack of evidence.