Across California, cities are in the midst of updating zoning and land use regulations to plan for new housing over the coming eight years.  In Los Angeles, the Department of City Planning Department hopes to use this process to ensure that growth is distributed equitably across its neighborhoods.

In a memo submitted on May 21 to the City Council's Planning and Land Use Management Committee, department staff lay out recommendations for how ongoing updates to the city's 35 community plans and the its housing element can establish "fair share" distribution of affordable housing, while also helping Los Angeles meet its obligation to zone for 456,643 new housing units under its regional housing needs allocation.

“Affordable housing has become an evermore critical lifeline for so many Angelenos,” said Planning Director Vince Bertoni in a statement released by the department. “With housing costs on the rise, we must facilitate housing production across every one of our neighborhoods to address our present and future needs. By aligning our long-range policies, we can achieve fair, equitable, and meaningful results.” 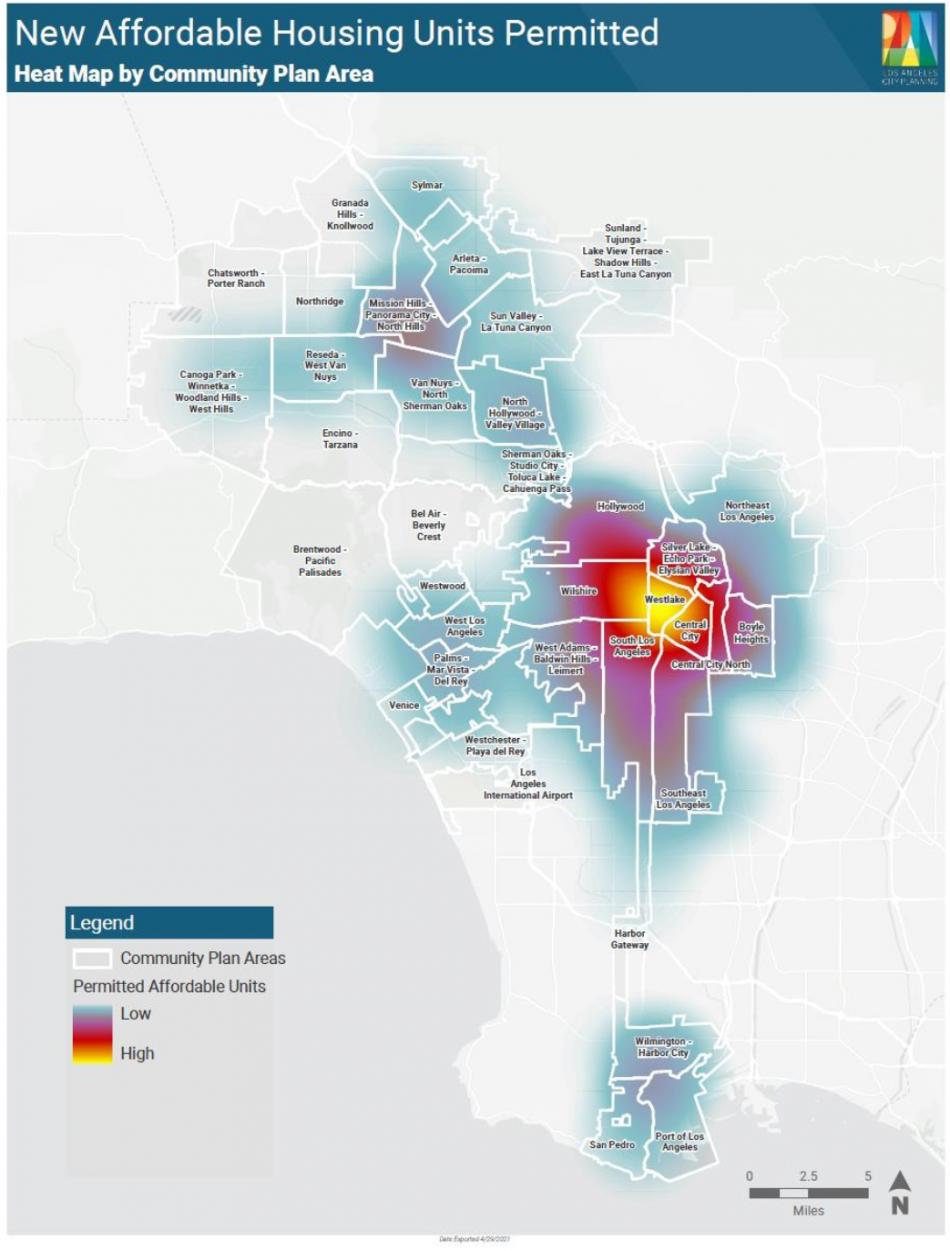 The report, which was co-authored by staff from the Housing and Community Investment Department, found that over the past decade, affordable housing has been increasingly concentrated in majority-minority neighborhoods in Central and South Los Angeles, which have long been characterized by poverty and segregation.  Just 14 percent of the city's affordable units over that time period - nearly 1,600 in total - were built in high-resource communities, compared to 62 percent in low-resource neighborhoods.

Moreover, a significant portion of the affordable housing that has been built in high resource communities have come about through land use incentives programs such as the statewide density bonus or the Transit Oriented Communities guidelines.  Just 6 percent of the city's subsidized affordable developments have been built in those areas.

The report found that zoning has played a role in the divide.  In high resource communities, 76 percent of residential parcels are zoned for single-family uses, with 20 percent set aside for apartments.  In low resource neighborhoods, the ratio is flipped, with 80 percent of residential land zoned for apartments and just 20 reserved for single-family homes. 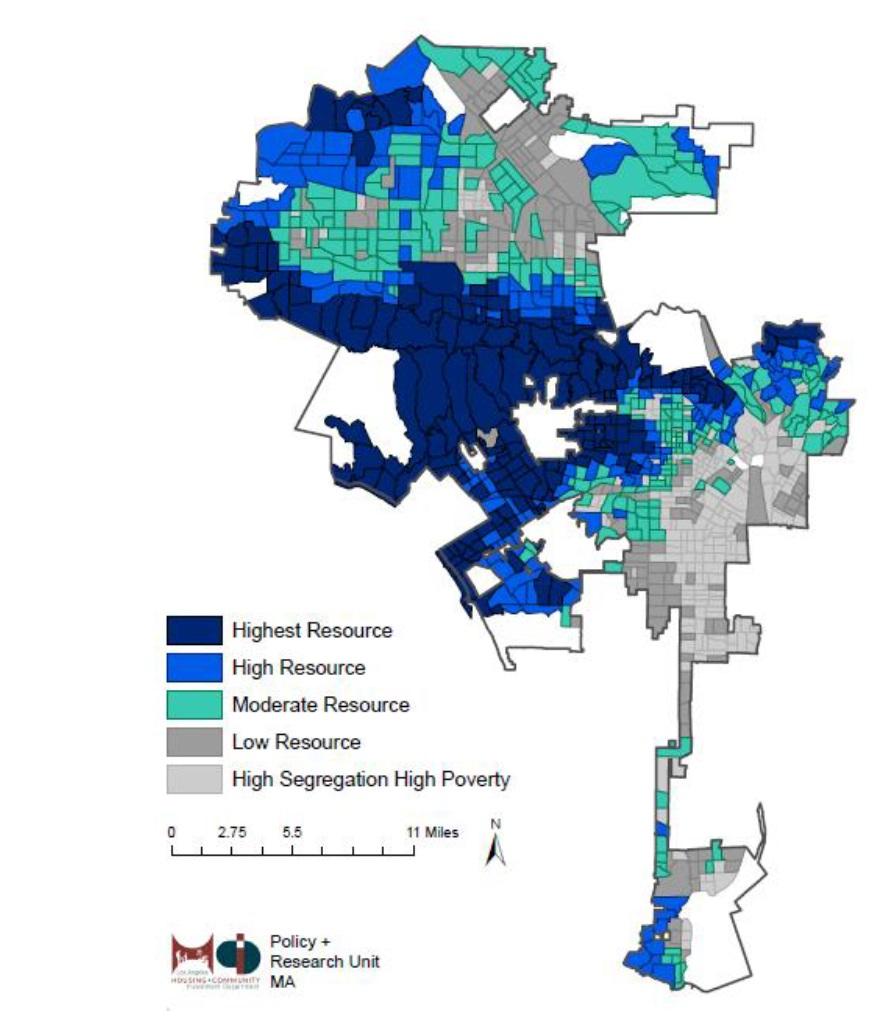 Funding criteria for tax credit financing, which set maximum loan amounts, may also inadvertently steer subsidized affordable developments into lower resource areas, according to the report.  While rule changes at the state and municipal and state levels have been implemented with the intent of fostering more affordable housing in high resource neighborhoods, the amendments are to recent to determine if they have had a tangible effect at this point in time.

Staff from the Housing and Planning Departments have offered short-term and long-term policy recommendations to address the distribution of affordable housing.

The report also reiterates a proposal to explore a citywide inclusionary housing policy, in which developers would be required to set aside a portion of new units in multifamily projects for lower-income households.  The report could touch on the establishment of an incentive-based system, like the Transit Oriented Communities program, as well as the virtues of a geographic-specific approach versus a blanket citywide policy.

Longer term initiatives would focus on initiating change through the community plan updates, taking into account historic patterns of segregation and access to jobs and amenities.  The proposed end result would be new numeric housing goals and targets for each community plan area based on income category.  This is itself similar to the approach taken to the periodic updates to the regional housing needs assessment, which establishes targets for cities and counties based on income level.

The report also calls for eliminating barriers to affordable housing developments in high resource communities, and recommends leveraging existing resources like public land or seeking partnership with other public and private entities. 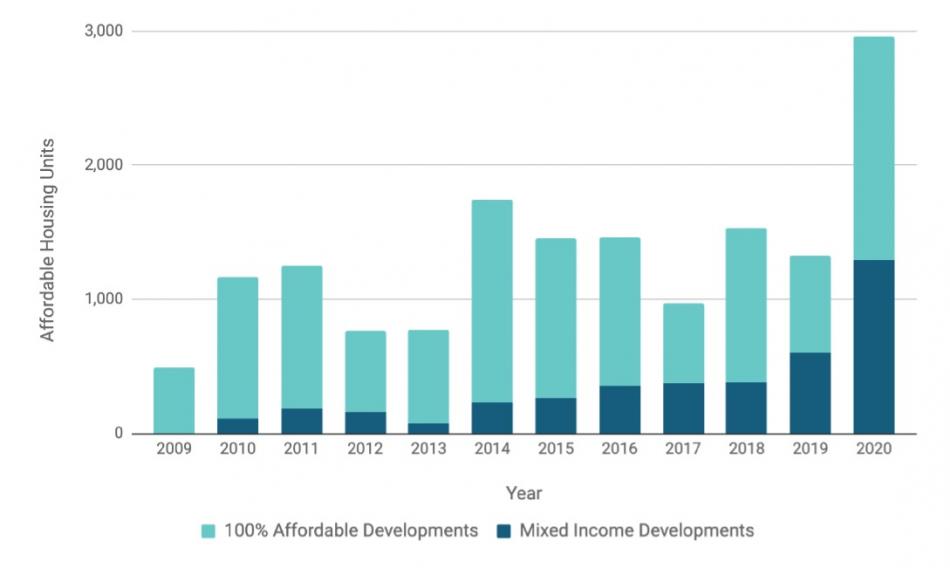 While the distribution of affordable housing continues to be concentrated away from high resource neighborhoods, and the pressures of increasing rent continue to fuel displacement, Los Angeles has in fact seen an uptick in the total amount of subsidized units built in recent years.  In 2015, just 7 percent of the approved units citywide were considered affordable housing (roughly 1,300).  As of 2019, that figure has increased to 20 percent (a record level of roughly 5,700 units).

The report attributes rising production to new funding streams at the state and local level, including the $1.2-billion Proposition HHH bond measure, but also to the success of land use incentive programs.  Mixed-income developments, such as those built using the Transit Oriented Communities guidelines, accounted for 44 percent of all affordable units approved in the City of Los Angeles during 2020.

Presentations of the report to the Council's Planning and Housing Committees are pending.

The report on affordable housing allocations across different parts of Los Angeles was directed by a 2019 motion from 1st District Councilmember Gil Cedillo.  Cedillo, citing a a report from the Housing Department which found that Council Districts 8, 9, and 14 are home to a disproportionate share of the city's supportive housing units, argued that Council District 2, 3, 4, 11, and 15 have opportunity sites for new permanent supportive housing or motel conversions in higher-resource census tracts.