More than one year after we last checked in, a pair of mixed-use developments are heading toward the finish line at the intersection of 9th Street and La Brea Avenue in Mid-Wilshire.

Progress is furthest along at 838-840 S. La Brea Avenue, where Sawtelle-based Wiseman Residential is wrapping up work on a new six-story building that will feature 53 apartments above subterranean parking and street-fronting retail space. 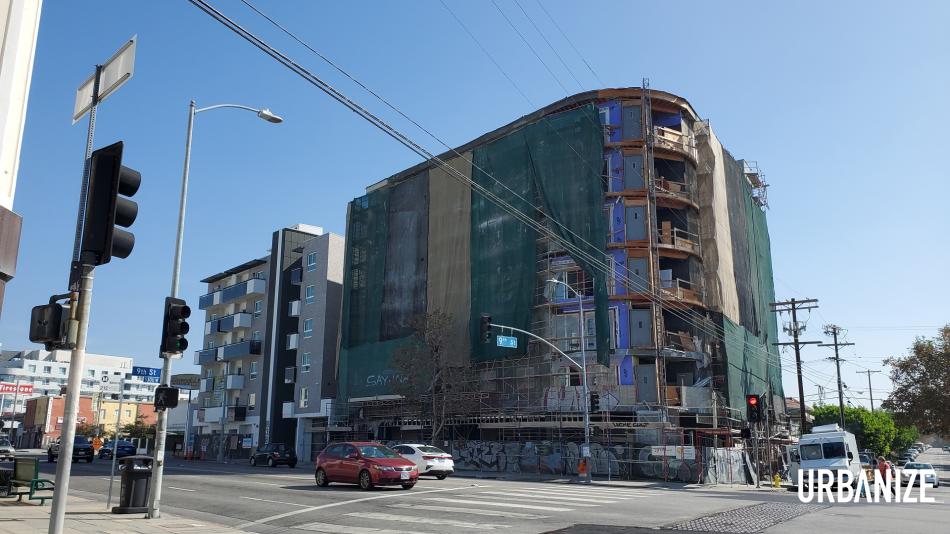 Uriu & Associates is designing 838 La Brea, which has a similar look to the numerous other projects between the Glendale-based architecture firm and Wiseman.

Next door at 850 S. La Brea Avenue, Element Investments has completed vertical construction at a near identical six-story building which will also include 53 apartments, approximately 3,000s square feet of ground-level commercial space, and basement parking.

OPEN Architects is designing the contemporary podium-type building, which is on track to open in 2023.

The building has been targeted by outgoing City Councilmember Paul Koretz as a potential acquisition through the Project Homekey program, which would see 850 La Brea open as either interim of permanent supportive housing.

Both project sites are located just two blocks south of the intersection of Wilshire Boulevard and La Brea Avenue, where construction is now underway for a new subway station as part of Metro's Purple Line extension, and multiple high-rise developments are in the works on sites to the west. Three blocks south at La Brea and 12th Street, construction is also in the home stretch for a seven-story, 67-unit apartment complex.