In concert with an upcoming street resurfacing project, the L.A. Department of Transportation and Bureau of Street Services is planning to implement protected bike lanes on the roughly half-mile stretch of 3rd Street between Main Street and Alameda Street. Those improvements would an upgrade to existing bike lanes between Alameda and San Pedro Streets, as well as the addition of protected bike lanes between San Pedro and Main, where they do not currently exist.

The project, when completed, would connect with a brief stretch of protected bike lanes on 3rd Street which was built to connect the two-way north-south bike lanes which run along Spring and Main Streets. 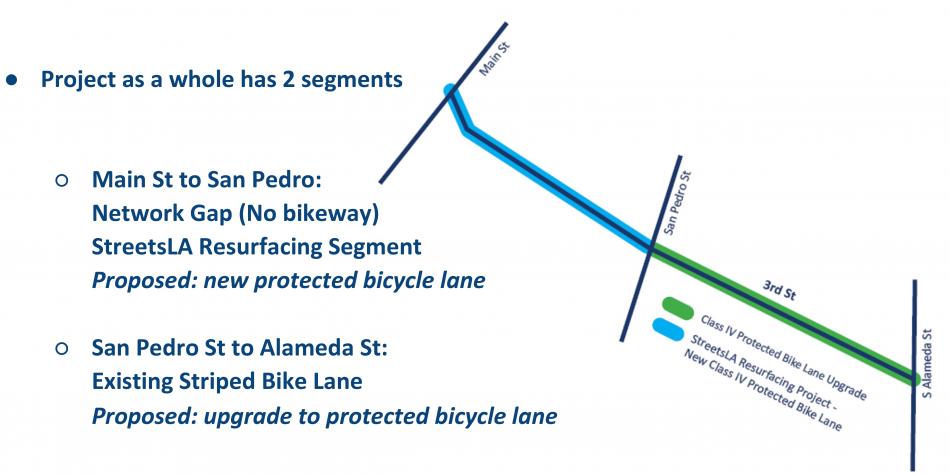 Bike lanes along 3rd Street were envisioned as part of the city's Mobility Plan 2035, and the corresponding stretch of 3rd has also been identified as part of the city's High Injury Network. City officials have also pursued the project to support Little Tokyo Service Center's proposed redevelopment of the former Umeya Rice Cake Co. headquarters with affordable housing.

Less certain are what side of the road the bike lanes will be located on. According to an LADOT presentation, a south side alignment on 3rd Street would avoid potential conflicts with right turn lanes, bus stops, and driveways - albeit with less convenience for visitors to Little Tokyo. A north side alignment would provide better access to Little Tokyo and other destinations north of 3rd Street, and is consistent with the alignment of bike lane segments to the beyond Main and Alameda - although the Main-Spring stretch is built to the south side of the street.

The repaving of 3rd Street is tentatively expected to occur this month.