After three years, the redevelopment of corner lot in Carthay that was once home to an Orange Julius stand has crossed the finish line. 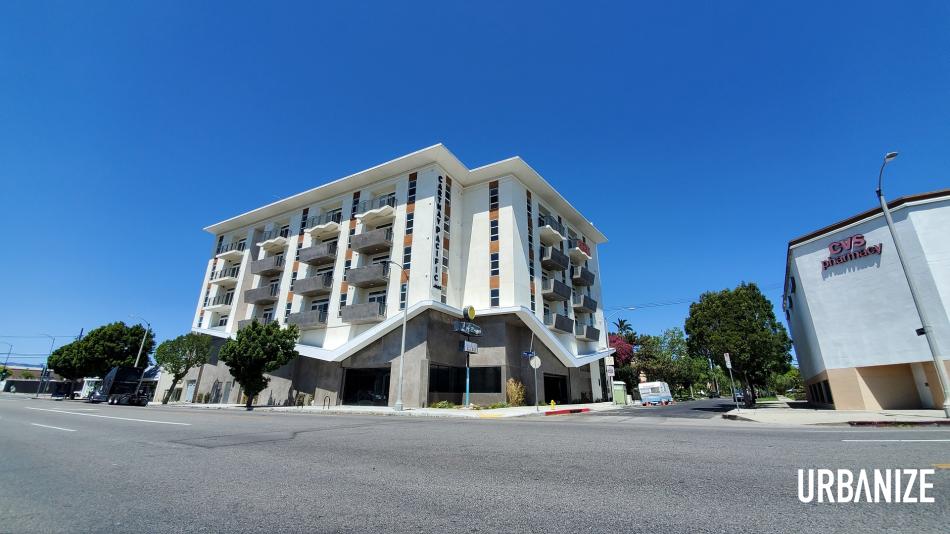 Construction is now complete for a new Googie-inspired apartment complex at 6001 W. Pico Boulevard, which consists of a six-story building featuring 48 residential units above 1,000 square feet of ground-floor retail and parking for 70 cars.  Five of the apartments will be set aside for low-income households, which made the project eligible for density bonus incentives permitting a larger building than allowed under base zoning.

PK Architecture designed the apartment complex, which uses the undulating roofline of the former Orange Julius stand as an architectural motif seen in the eave lines of the new building.  The stand's neon sign, which displays the name of the property's most recent tenant - L.A. Burger - has also been retained and incorporated into the project.

The design for the project resulted from a compromise between the developer and 5th District Councilmember Paul Koretz, who had sought to landmark the 1950s Orange Julius stand in 2017 to prevent its demolition. The original plan, which featured a contemporary look, was discarded in favor of the now-completed building.

The project joins a number of similar mixed-use projects rising along the surrounding stretch of Pico Boulevard, including a 123-unit apartment complex from Cityview now rising one block east at Hi Point Street and a 125-unit building from Wiseman Residential planned one block west.