A half-year since our last updated in mid-2021, construction has come to a close at Koreatown, a mixed-use apartment complex built by co-developers Jamison Services, Inc. and City Century. 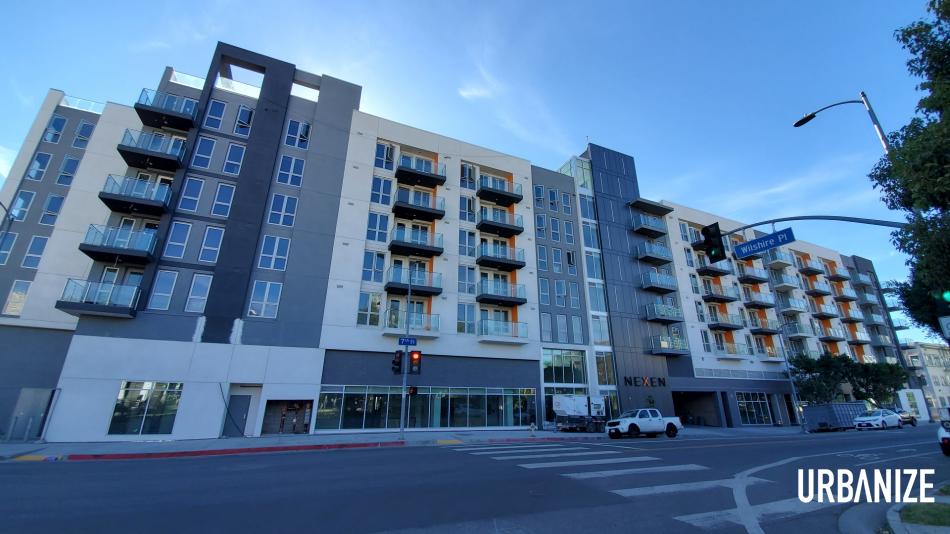 Located on a 1.2-acre property at 2938-2972 W. 7th Street, the project consists of a seven-story building featuring 228 studio, one-, and two-bedroom apartments - including 23 extremely low-income affordable units - atop 7,800 square feet of street-level commercial space and a 229-car garage. Residential amenities include a rooftop deck, a fitness room, and a central courtyard.

MVE + Partners is designing Nexen, which is composed of five levels of wood-frame construction above a concrete podium.  The contemporary low-rise structure is lined with cantilevered balconies, and features a stucco exterior - nearly identical to its appearance in conceptual renderings unveiled at the project's groundbreaking.

Jamison Services, which led construction, also partnered on the  25-story Kurve on Wilshire apartment tower that recently opened two blocks north at Wilshire Boulevard and Hoover Street, and is planning a 262-unit complex across the street from Bullocks Wilshire.

City Century, the other partner, is planning a series of high-rise developments in Downtown - including a three-tower complex near L.A. Live.