Construction is pushing toward the finish line at The Crosby and The Wesley, the first residential buildings at Inglewood's Hollywood Park complex, the massive development from L.A. Rams owner Stan Kroenke which is billed as the largest mixed-use project on the West Coast. 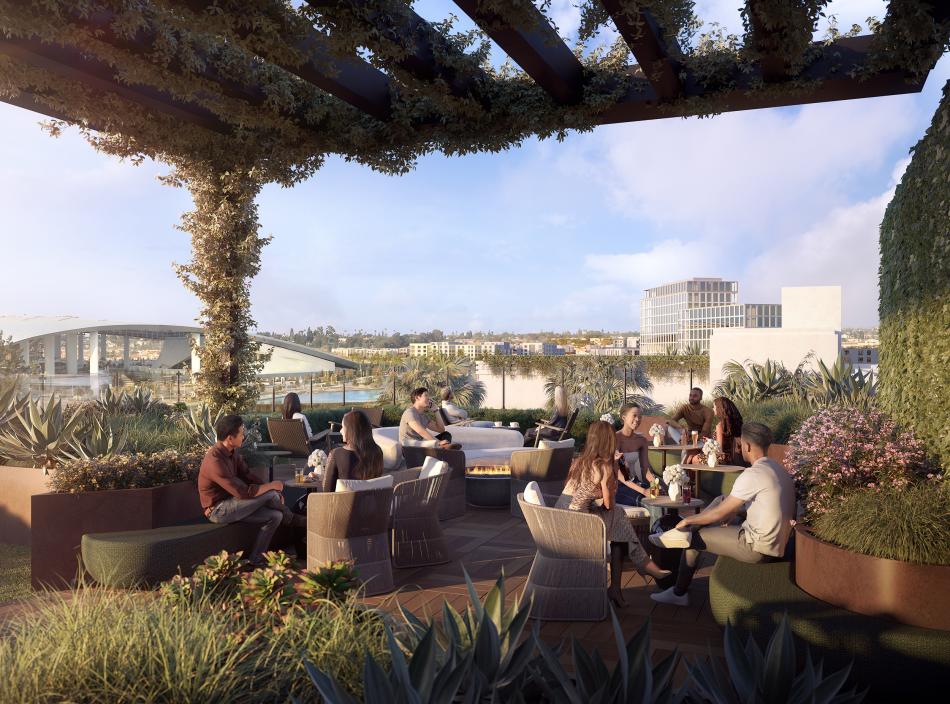 The new development at Prairie Street and Century Boulevard, anchored by SoFi Stadium, will eventually feature 2,500 residential units across more than 300 acres of land. The Wesley and the Crosby, the first two apartment buildings to open on the site, will feature 314 units that are scheduled to begin pre-leasing in January 2023.

Hart Howerton and TCA Architects are designing both buildings, while interiors are being handled by Kenneth Brown Design and Redmond Aldrich Design. Plans call for a mix of studio, one-, two-, and three-bedroom units, as well as on-site amenities. 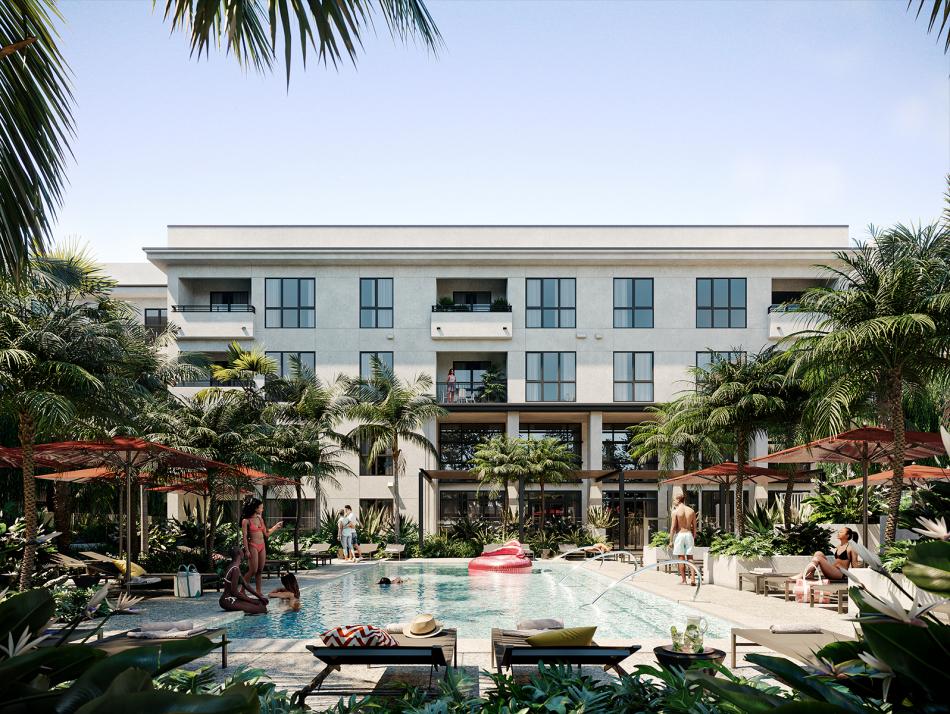 Pool deck at The CrosbyHollywood Park

Both are depicted as contemporary low-rise buildings, clad in stucco, which complement the new housing with unique common areas, as well as amenities including sky decks, fitness studios, and swimming pools.

“The development of our residences was inspired by the abundance of art, culture, and history in Inglewood, resulting in two sophisticated residences that feature purposeful design and one-of-a-kind living,” said Christopher Meany, a partner at Wilson Meany, which is managing the Hollywood Park development. “This was an important element as we began to execute on Mr. Kroenke’s vision for the residential, knowing that Hollywood Park aspires to become top-of-mind for renters seeking storied collections of full-frill units with first-class amenities.” 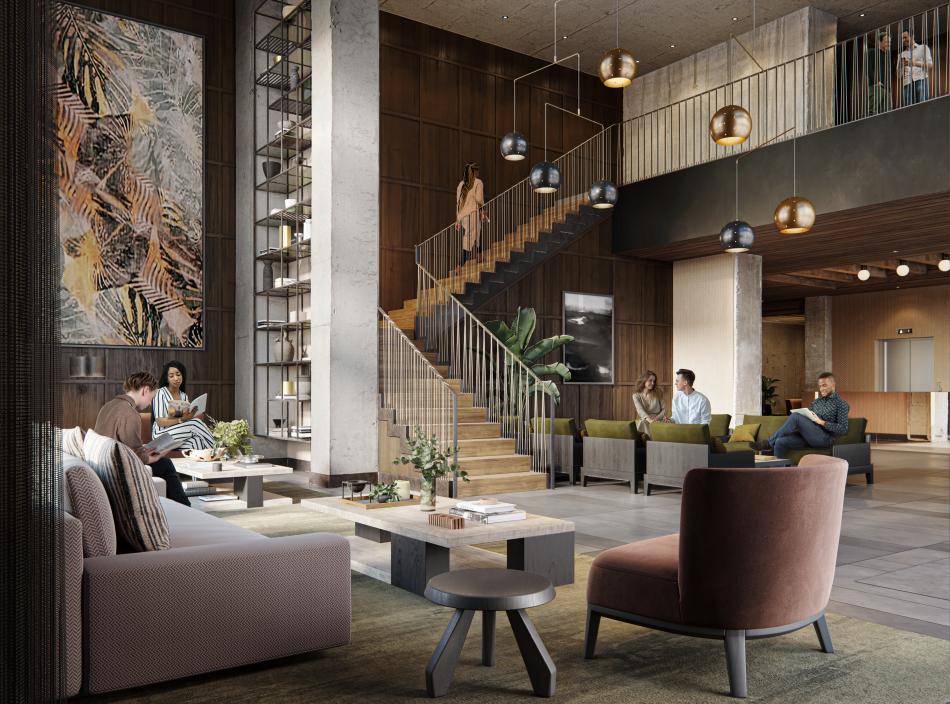 Lobby at The CrosbyHollywood Park

The final buildout of Hollywood Park, in addition to the proposed 2,500 homes, is expected to include nearly 900,000 square feet of offices, 890,000 square feet of retail space, and a 300-room hotel.  Other elements of the project, including SoFi Stadium and a new performing arts venue, are already open. Likewise, 25 acres of open space are planned throughout the complex, highlighted by a six-acre artificial lake which fronts SoFi Stadium.

Commercial tenants at Hollywood Park include the NFL Network, NFL.com, the NFL app, and NFL Redzone, which have leased 290,000 square feet of office space, as well as Sky’s Gourmet Tacos, Cinepolis, and Iconix Fitness. 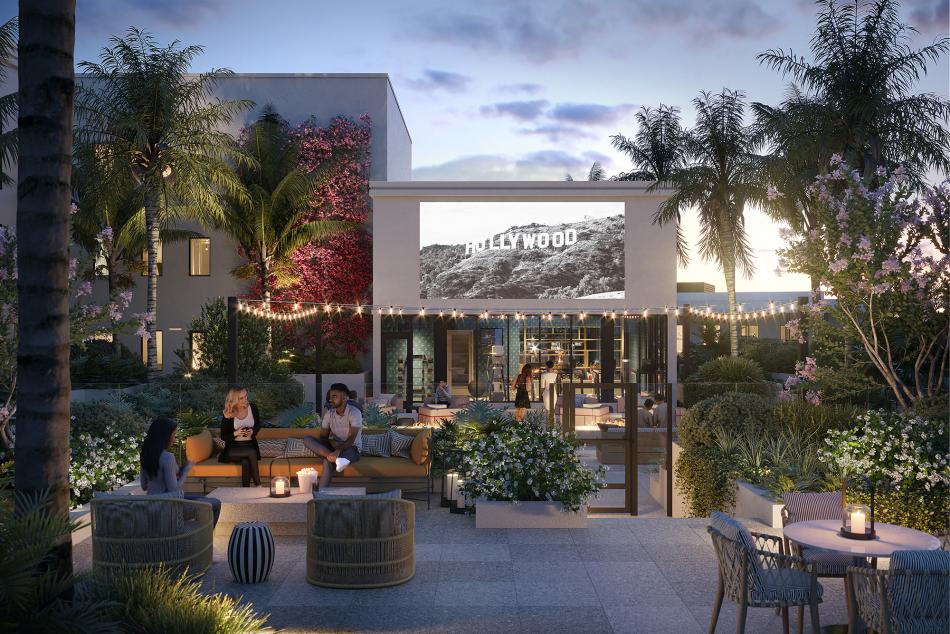 Hollywood Park, which has kicked off something of a development boom in Inglewood, will also be joined by a similar mixed-use project to the south. The Los Angeles Clippers are poised to join the Rams and Chargers in calling the city home, breaking ground last year on a $1.2-billion arena and entertainment complex directly across Century Boulevard.

The City of Inglewood, in the hope of connecting the new sporting venues with rail transit, is also pursuing the construction of a 1.8-mile automated people mover system which would run between the Crenshaw/LAX Line and Hollywood Park.