A pending presentation to the Crenshaw Corridor Design Review Board offers a first look at plans to redevelop a stretch of small commercial buildings near Leimert Park with multifamily housing and retail. 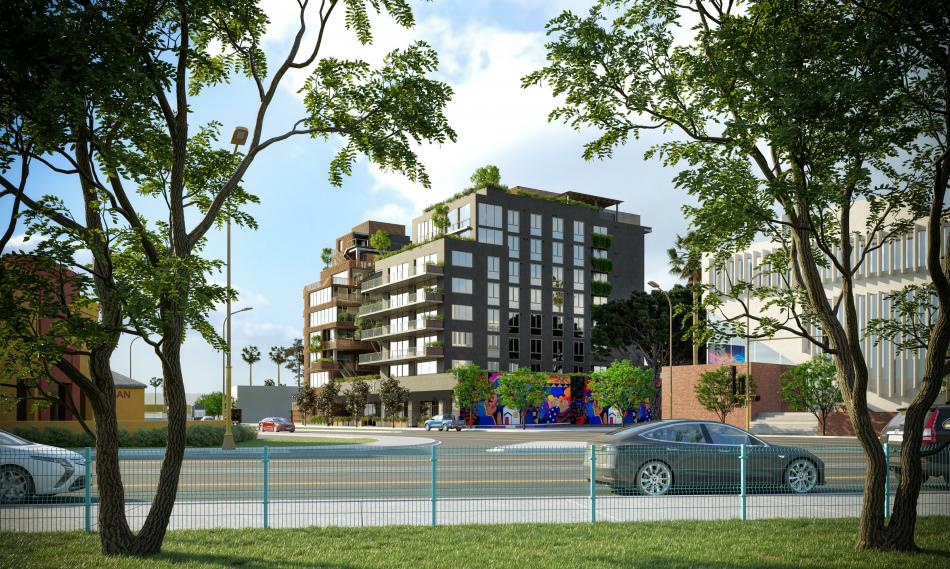 The proposed project, submitted to the Planning Department in September by local developer Treehouse, would rise a nearly half-acre site at 4421-4437 S. Crenshaw Boulevard. Plans call for the construction of an eight-story building featuring 101 apartments with 10,000 square feet of commercial uses (including a ground-level market hall and a rooftop restaurant) and a 15-car garage.

Treehouse has requested entitlements using Transit Oriented Communities development incentives to achieve a larger structure than allowed by zoning rules. The additional density and floor area will require that 15 of the proposed studio, one-, two-, three-, and four-bedroom dwellings be set aside as affordable housing at the low- and extremely low-income levels.

AO is designing the project, named Treehouse Leimert Park, which is depicted in renderings as a contemporary mid-rise structure clad in wood screens and painted stucco. Architectural plans show that the building would include a rooftop pool deck, a second-story courtyard, and interior recreation rooms on multiple floors.

The proposed apartment complex follows several new projects built nearby in anticipation of the opening of the Crenshaw/LAX Line's Leimert Park Station, including a 111-unit modular apartment complex completed by Universal Standard Housing and an under-construction mixed-use building with 124 residential units at the Crenshaw Boulevard and Stocker Street.

The project site also sits across the street from the future site of Sankofa Park, the northern bookend of the 1.3-mile Destination Crenshaw public art and open space project.

Treehouse, the developer, previously completed a co-living apartment building of the same name in Hollywood, and has a second project under development in Koreatown.